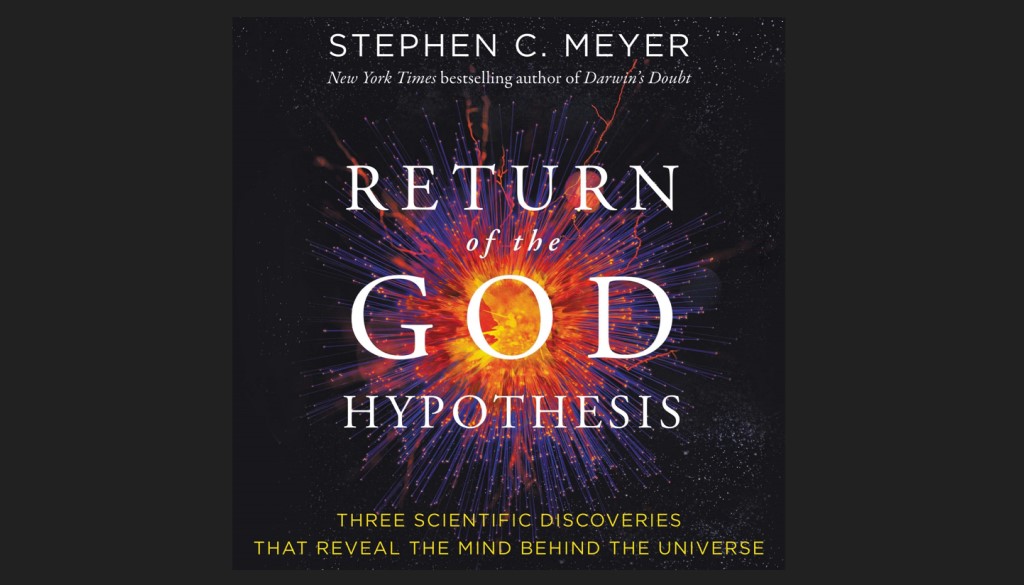 A friend of the Vatican Observatory suggested we take a look at a new (2021) book by Stephen C. Meyer: Return of the God Hypothesis: Three Scientific Discoveries that reveal the Mind behind the Universe, published by HarperOne (HarperCollins Publishers).  This person was impressed with the book, writing:

This is the perfect book for a humanistic / philosophical approach to physics, cosmology, and biology for undergraduates, particularly in faith-based schools. There is also an apologetic dimension in the power of its response to atheism and scientism. I would probably make this book a required text in a two-year “Jesuit Core Bachelor’s of Letters program” (which would cover mostly the first two years of college). At least I propose it as the default standard to beat….

There is [in the book] a compelling and comprehensible summary narrative that highlights the conclusions and import rather than the mathematical intricacies of the complex scientific reasoning. It “gives the story.” You learn the personalities and their ideas in context. Students get the general framework, the concepts and vocabulary, the historical particulars. That is a humanistic, liberal arts approach to the sciences that I would hope our schools could promote more consistently in core curricula. This approach would awaken some students to pursue particular disciplines without making every student take an entire three-hour course in physics and biology. There is simply too limited a curricular time to treat many disciplines in this fashion.

Such books as these can help us build a coherent Catholic liberal arts core curriculum suitable for our historical moment.

I include these comments because my take on Meyer’s book (a book that obviously will have some appeal to those interested in the subject of faith and science) is less favorable.  I find that Meyer misses an opportunity with this book to present to a broad audience a valuable argument about what science has to say about life, the universe, and God.  The opportunity is missed in large part because the book is too long and too technical.  Thus, it buries the best that it has to offer.

Return of the God Hypothesis takes aim at the idea that science shows that “the universe we observe has precisely the properties we should expect if there is, at bottom, no design, no purpose, no evil, no good, nothing but blind, pitiless indifference”, as Richard Dawkins stated it.  Meyer cites Dawkins’ statement repeatedly throughout the book.  Meyer’s argument is that this statement stands contrary to modern science: the expansion of the universe, the universe’s suitability for life, and the rise and diversification of life on Earth are three things from science that challenge the idea that the universe has the properties Dawkins claims.

Meyer emphasizes that this is a matter of broad importance.  People who reject religious belief, he says, cite science as a key reason for doing so.  A purposeless, goodless, Godless, indifferent universe leads to despair—something now so widespread, especially in young people.  Meyer wants everyone to know that science does not, in fact, point to such a universe.

But contrary to the friend’s comments above, I think that Meyer has written a book that almost no one can really read.  Far too much of it consists of technical discussions that are practically useless.  Chapters are devoted to things like quantum mechanical universal wave functions and gene regulatory networks.  Few people are competent across such diverse areas.  Even if Meyer is, it does not matter: overwhelmingly, his readers will not be, and the Dawkinses of the world will hardly concede the technical ground to him.

What then will come from Meyer’s extensive technical discussions?  At most, extensive squabbling over scientific details.  Even the more educated readers will be unable to follow those details, and as is the way of things today, will likely make decisions based on which “authority” they already trust.

Meanwhile, Meyer’s core argument—that science does not show the universe to have properties consistent with purposeless, etc.—is worth a hearing.  While Meyer speaks of “three scientific discoveries”, he almost unintentionally conveys (among all the technical baggage) that these three are all part of one broader discovery: that the universe of the past is not the same as the universe of today.  It evolves.

That is a loaded word that Meyer, an “intelligent design” advocate with the Seattle-based Discovery Institute, might not care for.  Once, the late Fr. George V. Coyne, S.J., Director of the Vatican Observatory for three decades, having accepted an invitation to speak, submitted to his hosts a talk title that included the word “evolution”.  When that title was a problem for the hosts, Fr. Coyne cancelled.  A single word triggered a breakdown in communication between people who shared an interest in God and in science.  No doubt that word was considered a problem because evolution is often associated with an atheistic, materialistic view.  Throughout the pages of Return, and largely buried in all the technical verbiage, is an argument that it should not be so associated.

For example, Meyer cites Carl Sagan as a materialist atheist, noting Sagan’s assertion that “the cosmos is all that is, or ever was, or ever will be”.  But a universe originating in a Big Bang, a universe that was once devoid of life and is not now, is not the sort of cosmos that “ever was”.  A universe that is unchanging over time, being either static or cyclic (either way having neither beginning nor end), can be Sagan’s sort of cosmos.  Two centuries ago, scientists thought that the universe was essentially unchanging and eternal—and life-bearing, since matter itself was thought to spontaneously generate life at some level.

We do not think that now.  Meyer tells the stories of the poet Edgar Allen Poe using a simple astronomical observation to challenge the idea of an eternal, unchanging universe; of Albert Einstein fixing his theories to agree with such a universe; and of the Belgian physicist Fr. Georges Lemaître developing the idea of what we now call the “Big Bang”, and the expanding, evolving, changing universe.

Given this evolving universe that science has revealed to us over the past two centuries, it turns out to be difficult to explain how things have come to be the way they are now.  This is not surprising.  An unchanging universe can always have been. It can be pitilessly indifferent.  An evolving universe, by contrast, presents us with the challenge of explaining how things have come to be what they are now, when they were once different.  Blind indifference seems unlikely to have yielded the universe that we see right now.

It seems so unlikely, in fact, that many current thinkers, attempting to explain how the universe that we see right now came to be, invoke a “multiverse”—an infinity of universes.  Meyer discusses all this—of course with too much technical detail (the multiverse is not a new idea, and Meyer might have read Lucretius, or Johann Georg Locher, for a less technical discussion).  The multiverse is an infinite violation of Ockham’s razor, he says; a single Creator God who is active in the universe offers a simpler, more elegant explanation.

That is a fair argument.  It should be understood by those who in some way despair because of “science”.  But it does not make a single Creator God a good scientific hypothesis.

Consider the question of life’s origin, for example.  The theory of spontaneous generation was discredited more than a century ago.  A good explanation for life’s origin continues to elude science; the origination of life is difficult enough and rare enough to have been so far “irreproducible”—scientifically miraculous.  Surely, a Creator is a better scientific explanation for this miracle than is a multiverse: in which anything that can happen, must happen, just by blind, indifferent chance; in which “all” the explanation needed is an infinitude of universes and the fact that life is here.

But we might eventually discover how life originates in nature.  Then the Creator theory will be discarded, with no need for God’s action to explain the miracle.  Meyer devotes a chapter to insisting that he is not advocating for a “God of the Gaps” hypothesis, but he does not persuade.  As Fr. Lemaître himself argued when Pope Pius XII spoke of the Big Bang in terms of science bearing witness to God’s “Fiat Lux”, the idea that science points to a Creator’s action is a “God Hypothesis” with many difficulties.

Showing that science does not support ideas like those of Dawkins, Sagan, etc., is valuable.  It might help people to better understand science, communicate about God and science, and avoid despair.  Unfortunately, Stephen C. Meyer’s Return of the God Hypothesis buries this value among much less valuable stuff.  It may be that it would still serve a Catholic liberal arts core curriculum, but I think if so, that would be because there are not better choices out there (making it the default standard to beat), and there ought to be.