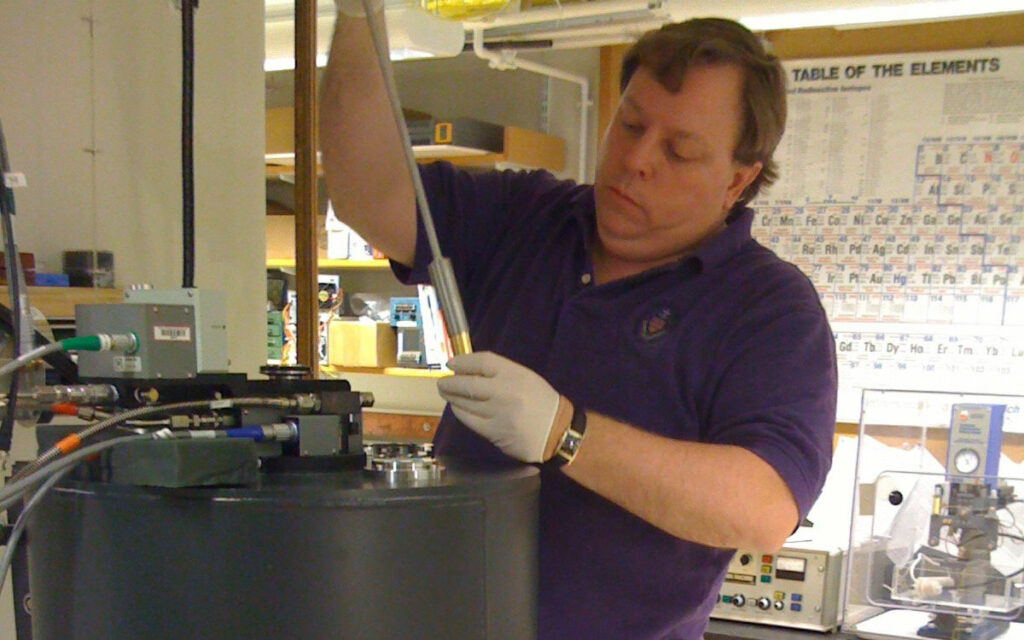 And then I wrote… In 2017, I was invited to contribute a chapter to a book called The Story of the Cosmos: How the Heavens Declare the Glory of God, which was edited by Daniel Ray and Paul M. Gould and published by Harvest House in 2019. Here I reprint my chapter, in three parts. This part, I warn you, ends on a cliffhanger!

There’s this fun experiment I do in my meteorite lab…

I should explain. My field is the study of meteorites, those rocks that fall from the sky and give us free samples of the asteroids, and sometimes the Moon or Mars. Once they fall, some of them actually get found on the ground; and once they get collected, with luck some of those wind up in museums or university collections, where people like me, in principle, could study them. Of course curators in those places jealously guard the meteorites from anyone else touching them, especially those nasty scientists who want to do terrible experiments on them. But when I arrived at the Vatican Observatory, twenty five years ago, there was no curator for its collection of meteorite samples. So I stepped into the role, and promptly gave myself permission to experiment away.

Our collection was originally assembled in the 19th century by a wealthy French amateur, the Marquis de Mauroy.It’s a collector’s collection, which means it has a little bit of every kind of meteorite. One of the things you can do with a collection like that is to do a survey across all the different meteorite classes and measure various properties. In my case, I decided to work on physical properties: density, porosity, magnetic and thermal characteristics.

One of those properties we measure is called “heat capacity,” which is (as you might guess from the name) the capacity of the rock to hold heat. How much heat does it take to raise the temperature of a gram of our rock by one degree—or, if you prefer, how much heat does the rock give off when it drops one degree in temperature?

How do you measure that?

How do you measure that? There are million-dollar machines that take a tiny slice of sample and run it up and down the temperature scale, from near absolute zero to room temperature, in a pure vacuum; it takes a while to make these measurements, so you usually let the machine run overnight, and then you spend another night taking calibration data. It’s very precise, but it’s time consuming. A Jesuit colleague of mine at Boston College, Fr. Cy Opeil SJ, has one of these gizmos, and they’re tricky to calibrate and tricky to run; half the time, it needs fixing. But when you do it right you get really gorgeous data.

Unfortunately he’s in Boston, and I’m in Rome. I can’t afford to get one of those devices for myself. I don’t have a million dollars or a full time technician at the Vatican. Nor do I have enough nights to go through our whole collection, rock by rock.

For that matter, measuring just a tiny slice of a meteorite can be misleading. Meteorites are notorious for being a wild conglomeration of different kinds of rock stuck together; that’s what happens when different kinds of asteroids run into each other out in space. And beyond that, even though I am a scientist who would love to do terrible experiments on those rocks, I am also enough of a curator that I hate the thought of cutting them up.

Imagine if you will…

I was talking about this with a French colleague of mine, Pierre Rochette, when an offhand comment from him led to the idea for our experiment:

First, take a dewar—an insulated bottle—and fill it with liquid nitrogen. (Industrial strength refrigerators can make air so cold that the oxygen and nitrogen gases in the air condense into little droplets of liquid. How cold is this stuff? In the Fahrenheit scale, it’s more than 300 degrees below zero. We don’t use the oxygen, just the nitrogen; there’s more of it, and it is less corrosive.)

You put the dewar and the liquid nitrogen on a scale, hook the scale up to a computer, and measure, second by second, how the total weight slowly drops as the nitrogen slowly warms up and boils away.

Then you drop in your sample. At first, the weight on the scale jumps up by the weight of the sample; but the rock is at room temperature, and it immediately heats up the liquid nitrogen, so the nitrogen starts boiling away like mad, much faster than when the dewar was simply sitting untouched. The weight of the system plummets as the nitrogen boils off… until finally the rock has been cooled all the way down to liquid nitrogen temperature. Then the boiling stops, and the weight loss just goes back to the same slow decrease that you had before you dropped in the rock.

Line up the “before” trend with the “after” trend, account for the weight of the rock, and the difference in the weights before and after you dropped in the rock is the number of grams of liquid nitrogen that got boiled away due to the rock cooling down. You can look up how much heat it takes to boil off one gram of liquid nitrogen, multiply by the number of grams of nitrogen that were lost, and now you know how much heat was absorbed from the rock.

The theorist in the lab

Now as it happens, my training was as a theorist, writing computer models and the like. I never actually spent time in a lab when I was a student. So I’ve always been puzzled by such simple questions as, where do you go to get a “dewar”? In this case, I just went to a local discount store and bought a stainless steel coffee Thermos. Likewise, where do you get liquid nitrogen? It happens that our lab at the Vatican is actually in the Pope’s summer gardens; and the gardens include a working dairy farm; and… did you ever live on a dairy farm? Cows have to have calves in order to give milk. In the old days they used to keep a bull around—no jokes about Papal Bulls, please—but now, like most dairy farms, the dairy farm in the Papal gardens keeps bull semen frozen in liquid nitrogen. They have a big tank of the stuff, and we can just go next door to borrow a cup when we need to brew up a measurement.

Naturally, it’s not that easy. It turns out that all sorts of little effects happen that hadn’t occurred to us. For instance, if the cold nitrogen is exposed to the air in the lab, then you get a little layer of ice forming on its surface; it’s freezing the humidity out of the air. It’s a small effect, but the extra weight of the ice is enough to goof up our readings. So we place a little plastic canister over the dewar; it fills up with the nitrogen boiling out of the dewar, driving away the water-rich air. I bought one in a kitchen shop in Italy, it’s designed to hold uncooked spaghetti.

And there’s also the fear that maybe dropping a rock into liquid nitrogen isn’t good for the rock. You may have seen demonstrations where you put a flower or a banana into liquid nitrogen and then after it freezes, you can pull it out and shatter it. Folks in the meteorite world have all heard that the way to break up one of the hardest materials we deal with, meteorites that are chunks of iron-nickel, is to dunk them in liquid nitrogen. Doesn’t my experiment shatter my meteorites? Turns out, actually, to shatter an iron meteorite you do dunk it in liquid nitrogen all right; but then you give it a good whack with a sledge hammer. So we just have to be careful to keep our sledge hammers out of sight when we do these experiments, so as not to give anyone ideas.

Now, over the past several years, my colleague Br. Bob Macke SJ and I have measured hundreds of meteorite samples this way, and we’ve gotten some interesting results that could fill up this chapter, just talking about them. But what I really want to discuss here is something bigger.

Why do we do these experiments?

Granted, other scientists use our numbers when they make models to explain how asteroids heat up. But why do we—or they—care about asteroids?

It’s possible that our numbers may someday help us plan how to mine an asteroid for its mineral wealth, or deflect it from a path that’s coming straight at us to destroy all life on Earth… And, seriously, our numbers would actually be useful for those purposes.

But that’s not what gets me up in the morning to spend another day dropping rocks into liquid nitrogen. There’s no sense of urgency that says, “Hurry! hurry! If you don’t get these measurements done by the end of next Thursday, then in five hundred years from now the human race won’t know how to deflect an oncoming asteroid and we will all be toast!”

88  |  A Conversation with the Universe