Drive northeast of Cincinnati, Ohio, and a few miles due east of the town of Lebanon, and you will find Fort Ancient.  The “fort” was constructed by Native American “Hopewell” people long prior to the arrival of peoples not indigenous to the Americas.*  The place is really cool.  It is an impressive piece of work, consisting of three and a half miles of earthen walls that measure up to 68 feet wide and up to 23 feet high, enclosing a flat area of 100 acres, all sitting atop a 235-foot high plateau overlooking the Little Miami River.  Within the walls of Fort Ancient are a museum/visitor center and a very nice picnic area constructed during the Great Depression by one of the African American units of the Civilian Conservation Corps. 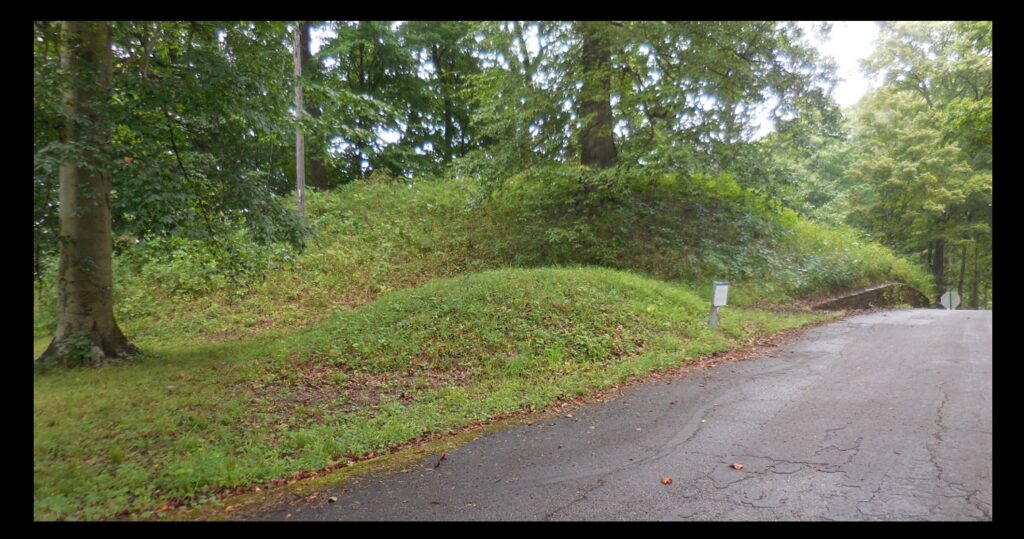 Some of the walls and mounds of Fort Ancient.

Left—the stone picnic shelter at Fort Ancient, constructed by the Civilian Conservation Corps in the 1930s.  Right—some of the men of the CCC who constructed the shelter and who otherwise made Fort Ancient into such an attractive place to visit.

But Fort Ancient was probably never a fort.  The walls are broken by 67 openings.  Inside the area are various stone circles, sections of flagstone pavement, and conical and crescent-shaped mounds.  So, given all the wall openings and other features, archaeologists think Fort Ancient was not a fort, but a place “constructed for social, ceremonial, and political events”.  It was an event space!

It is an old event space.  Archaeologists have found patterns of dirt-filled holes that appear to have held the wall posts of several oval-ish structures, structures that also contained cooking and storage pits with pottery fragments, animal bones, flint tools and flint flakes, and plant remains.  Radio-carbon dating from charcoal found in the post holes yields a date of 120 A.D.

The Hopewell civilization had long since vanished by the time European explorers and settlers came across Fort Ancient and other earthen mound constructions that dot Ohio and nearby states.  According to a panel at Fort Ancient, scholars in the 19th century hypothesized that there were three great New World civilizations: the Inca, the Aztec, and the Mound Builders who built these earthworks places.  The scholars supposed that the Native Americans who lived in the area when Europeans arrived had conquered the Mound Builders.  They imagined that the modern Native Americans or “American Indians” could never have built structures like Fort Ancient (the 19th century was a big time for declaring—on the basis of science, of course!—that certain groups of people could never do certain things) but could have conquered the people who did.  Today archaeologists believe that the people who built Fort Ancient were indeed the ancestors of modern Native Americans, but still not much is really known about them.  A little bit about their appearance and what they wore can be ascertained from artwork that has been found on sites like Fort Ancient.  But there is a lot of room open for speculation about them—a lot of room. 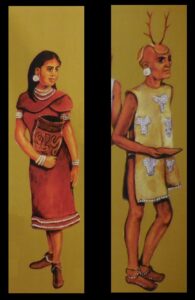 A panel in the Fort Ancient museum center shows these drawings, among others, of a Hopewell man and woman.  Clothing and ornamentation are based on clay figurines found at Hopewell sites in Ohio and Illinois.

One of the interesting bits of speculation involves Fort Ancient and astronomy.  Inside the museum there is a panel titled “Hopewell Astronomy” that states:

Four mounds in the North Fort form a perfect square 512 feet to a side.  These are not burial mounds but covered areas where the Hopewell people kindled fires.  Researchers have found alignments between one of these mounds and several openings in the northeast corner of the earthwork.  One alignment points to the position on the horizon where the sun rises on the summer solstice.  Two others appear to be oriented on the rising of the moon.  This portion of the Fort Ancient earthworks may have functioned as a calendar.

At the mound in question is a panel titled “Astronomical Alignments” stating:

American Indians who built Fort Ancient used the sun and moon to measure time.  By observing the rising location of these celestial objects they knew when to gather together for religious or social events or when to plant crops.  They used sunrise locations to predict annual events and moonrise locations to measure intervals of several years’ duration.

You are at the southwest corner of a nearly perfect square made by four mounds.  Three astronomical alignments have been demonstrated from this point.

I thought this was, of course, very cool.  I could stand at the mound and look out toward gap #2.  The museum even had an artist’s impression of a Hopewell ceremony for the sun rising through the gap.

Astronomical alignments as illustrated by the two panels, in the museum (left) and at the mound (right, showing gaps #1, #2, and #3).

Left—the view from the mound, through gap #2 (arrowed) where the sun would rise on the summer solstice.  Right—a view of gap #2 from up close.

Left—painting in the Fort Ancient museum showing an artist’s impression of a sunrise ceremony.  Right—detail of the painting.

But then skepticism started kicking in….

First, standing at the mound, looking down through the sunrise gap—gap #2—I noticed all the trees visible in the distance.  Ohio is not a desert; it has lots of trees, and lots of vegetation in general.  Trees would have to be cleared all the way to the horizon in order to see the sunrise.  In the painting, everything is denuded of trees.  (And there is snow on the ground, which seems wrong for a summer solstice—but I suppose that is artistic license.)  Also, the painting shows the sun standing above the horizon, well after sunrise.  The sun does not rise straight up in Ohio (that only happens at the equator), so the sun in the painting would have had to have risen from a point well to the left of the gap, not in the gap itself.

In reality, at the actual moment of sunrise, the sun would just peak out over the horizon.  What would be seen through the gap #2 would be the sun doing just that.  The sun would then move up and to the right, away from the gap.  So in order to see the sunrise in the gap, the horizon would also have to be flat, and the ground would have to be clear of vegetation and other obstacles all the way to the horizon.  Keeping that all clear would be a heck of a lot of work in June, in Ohio, when every plant that lives is growing at full speed.  And the moonrise gaps would have to be kept clear, too, for events that occurred only once a decade.

Simulation (made using the Stellarium planetarium app) of the June sun rising through a gap on the horizon at Lebanon, Ohio.  Images are three minutes apart.  Note how much the sun moves to the right as it climbs up into the sky.

Well, perhaps the Hopewell people were really into cutting brush.  But then I ran into something else: a panel showing an old map of Fort Ancient, with the various gaps in the wall marked—and there was nothing on that old map for gap #2.  The old map was from Ephraim George Squier and Edwin Hamilton Davis’s detailed survey of ancient earthwork structures, Ancient Monuments of the Mississippi Valley: Comprising the Results of Extensive Original Surveys and Explorations, published in 1848.  Gap #2 today is not small.  Why is it not on the old map?  Was it in fact cut by some farmer in the years after Ancient Monuments was published, so that the gap has nothing to do with ancient Native Americans?

Left—two maps of the section of Fort Ancient just north of where Route 350 passes through the eastern wall.  The newer map shows gap #2; the older map does not.  Right—the two maps superimposed on one another. 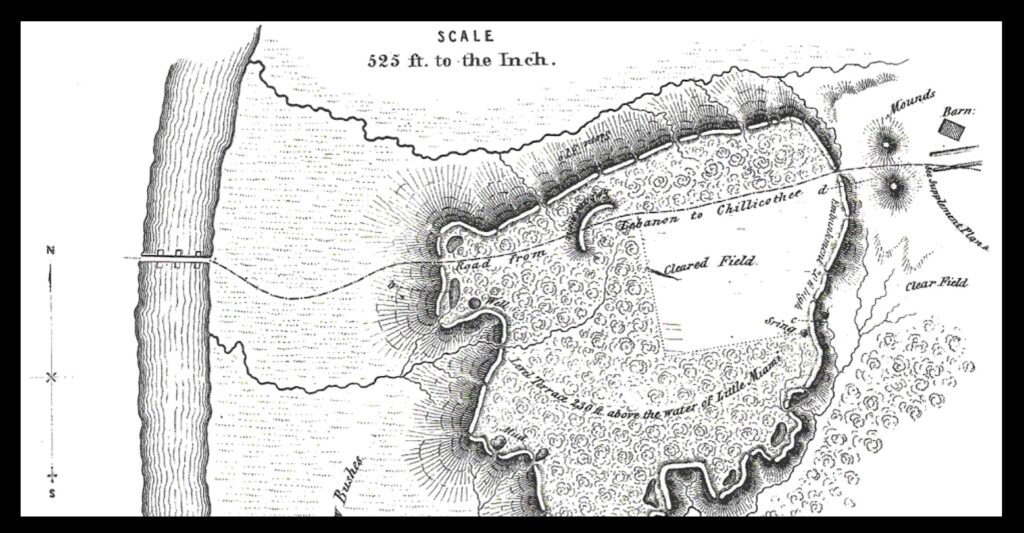 The old map, as published in 1848 (Ancient Monuments of the Mississippi Valley).

Such is the nature of science.  So often science is an uncertain business.  Surely the business of archaeology is particularly uncertain, where so little hard information is available about a place like Fort Ancient that is so remarkable.

I speculate that the Fort Ancient astronomical alignment might have been discovered by a professional scientist who wrote about it with all due caution and warned about the inherent limits involved in determining things ranging from alignments to dates of holes.  Or, perhaps the alignment was discovered by an amateur who was more enthusiastic.  Either way, I speculate that the alignment was just too cool for people to not talk about, and before long an idea that was never rigorously tested got turned into a way-cool feature of Fort Ancient that captured the imagination of visitors and artists alike.  The idea could even be made into a cool video (below, from the Ancient Ohio Trail).  Who can’t appreciate the image of the sun rising up out of the gap in the snow-covered walls on the summer solstice?

But in science it is good to be a bit skeptical.  That skepticism need not prevent anyone from thinking a place like Fort Ancient is way cool.  And maybe those old mapmakers just missed that gap, and the Hopewell people really did like cutting brush!

*All information pertaining to Fort Ancient in this post comes from material in the site’s museum/visitor center and various plaques and informative panels around the site.