This post originally ran in the summer of 2017.
I’m re-running it in advance of a post that will appear in two weeks that will talk about
Johannes Kepler’s ideas about the nature of stars. 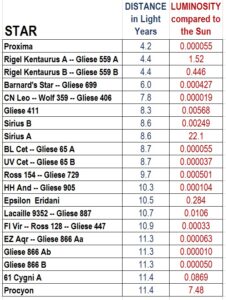 Distances to and Luminosities of nearby stars.  Click on the table to enlarge.

The table at right* shows the distance to and luminosity of the twenty stars closest to our solar system. Distance is measured in light years (meaning that if a star is 10 light years from Earth, then it would require 10 years to reach that star, travelling at the speed of light). Luminosity, or power output, is given in terms of the Sun’s output (so a star with the same power output as our Sun would have a luminosity of 1). The stars in this table are the solar system’s twenty nearest neighbors.

Notice what a wimpy lot our neighbors are. Yes, there are some respectable stars among the bunch—obviously Sirius A, with 22 times (22x) the Sun’s power output, is a serious*~ star. Sirius is the “Dog Star” in the constellation Canis Major, and the brightest star in the night sky. It appears bright to us both because it is very close and because it is quite powerful. Procyon, the “Little Dog”, weighing in with over 7x the Sun’s luminosity, is another respectable star. And then there are the stars of Rigil Kentaurus (“Alpha Centauri”), which are very comparable to the Sun. There is also Epsilon Eridani (a barely-visible star in the barely-visible constellation Eridanus, the River) with a bit more than a quarter the Sun’s power, and then…

…and then there are a bunch of lousy excuses for stars! The star Wolf 359 (Star Trek fans will know this as the site of a battle in which a single Borg ship destroyed an entire fleet of Federation star ships) puts out power equal to 0.000019 Suns. The Sun is 53,000 times more powerful than Wolf 359. The Sun is 105,000 times more powerful than Gliese 866 Ab. These stars are not the brightest bulbs in in the proverbial box!

In fact, of the 100 nearest stars,* only four are more powerful than the Sun—Sirius, Procyon, Rigil, and Altair in the constellation Aquila (the Eagle). And only 11 of the nearest 100 are more powerful than Epsilon Eridani. And only 22 have at least 1% of the Sun’s luminosity. That’s right, 78 of the 100 nearest stars can’t muster 1/100th of the Sun’s power output. All 78 of them together would not equal the Sun. In fact, as many of them are like Wolf 359 (perhaps better named “Chihuahua 359”—“Wolf” being too strong a name), all 78 would not come close to equaling the Sun.

The universe seems to be full of low-power stars. The general name given to such stars is “red dwarfs”—“dwarfs” for obvious reasons, “red” because they are not very hot and glow with a dull red color. You will often hear that the vast majority of all stars are red dwarfs.

Yet not a single star that you see in the night sky is a red dwarf. Of the 100 nearest stars, about 15 are visible to keen unaided eyes under very dark, non-light-polluted skies.~* Every single one of those “naked eye” nearest neighbor stars puts out more than 1% of the Sun’s power. Thus every single star that you see with your unaided eye—even the faintest star you might see under pristine, dark skies—would rank among the most luminous 22 of our neighboring stars.

In other words, when you look up at the night sky, you do not see the “average Joes” and “average Janes” of the stars. You see only a select group of stars—the rich and the powerful, the best and the brightest. That’s something to consider: the stars we see are not at all representative of what the vast majority of stars really are. The universe as a whole is not really that much like the stuff we see with our eyes.

This would have surprised many astronomers from the past few centuries. After Copernicus’s heliocentric theory became widely accepted, astronomers tended to assume that what we see is representative of the universe as a whole. For example, as noted in a recent post, Galileo regularly assumed that the stars were just like the sun, and his view was not uncommon. And, as noted in another post from a while back, astronomers also commonly assumed that other planets would be just like Earth. Thus you will find in astronomy books from the past few centuries illustrations showing the universe being full of innumerable star systems like our solar system. 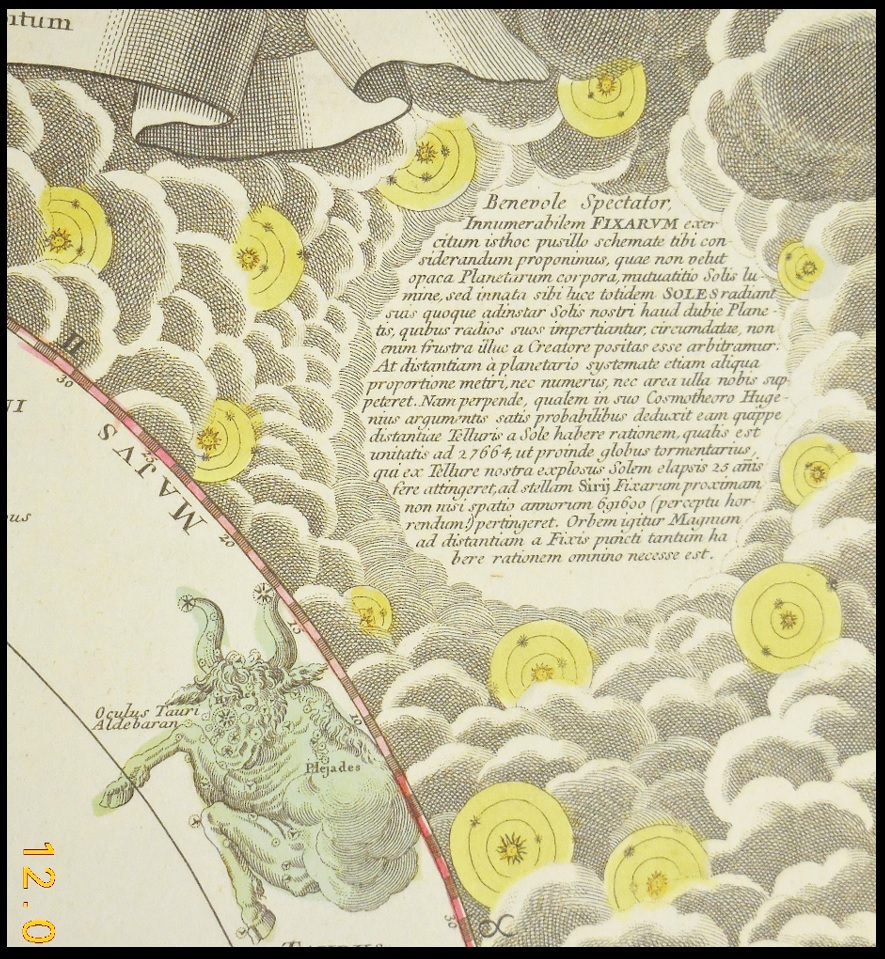 An illustration from the 1742 Atlas Coelestis of Johann Gabriel Doppelmayr showing the stars as being suns. The Latin reads, “Kind viewer, for your consideration we display to you in this little sketch the immense swarm of FIXED STARS, which shine not with reflected light of the Sun, in the manner of the dark bodies of the Planets, but all shine as SUNS, with light innate to them. And without doubt all are surrounded by their own Planets, in the fashion of our Sun, to which they impart their radiance. We suppose these have not been placed there in vain by the Creator…. [Benevole Spectator, Innumerabilem FIXARUM exercitum isthoc pusillo schemate tibi considerandum proponimus, quae non velut opaca Planetarum corpora, mutuatitio Solis lumine, sed innata sibi luce totidem SOLES radiant suis quoque adinstar Solis nostri haud dubie Planetis, quibus radios suos impertiantur, circumdatae, non enim frustra illuc a Creatore positas esse arbitramur….]” This image is of a modern reproduction of the Atlas Coelestis that is in the Archives and Special Collections of the Ekstrom Library of the University of Louisville (Kentucky).  Image used with permission.

But as we astronomers have learned more about the stars, we have found that there is great diversity among them. Some stars have been found to be far larger and more powerful than the Sun. The star Rigel, which shines prominently in the constellation Orion, is so powerful that the Sun compared to it is like Wolf 359 compared to the Sun. Seen from Earth, Rigel and Procyon appear to be comparable stars. But that is only because Procyon about 80 times closer than Rigel. Now powerful modern telescopes have shown astronomers that the Rigels are vastly, vastly outnumbered by these red dwarf stars that are much smaller and weaker than the Sun. We now understand that the “typical star” is not much like the Sun. Nor is the typical star much like the stars we see in the night sky such as Procyon, Sirius, and Rigel. The “typical star” is a red dwarf. Just as astronomers in the past learned that planets are diverse, and not all like Earth, astronomers today are learning that stars are diverse, and not all like the Sun.

And, when we consider that astronomers today believe that the universe as a whole consists primarily of “dark matter” and “dark energy”—things that we cannot even find on Earth at all—we understand that neither our planet, nor our Sun, nor even our very matter and substance, is particularly representative of the universe as a whole. It’s a strange universe out there. It is not at all like that endless procession of Sun-like systems that astronomers envisioned not so long ago. 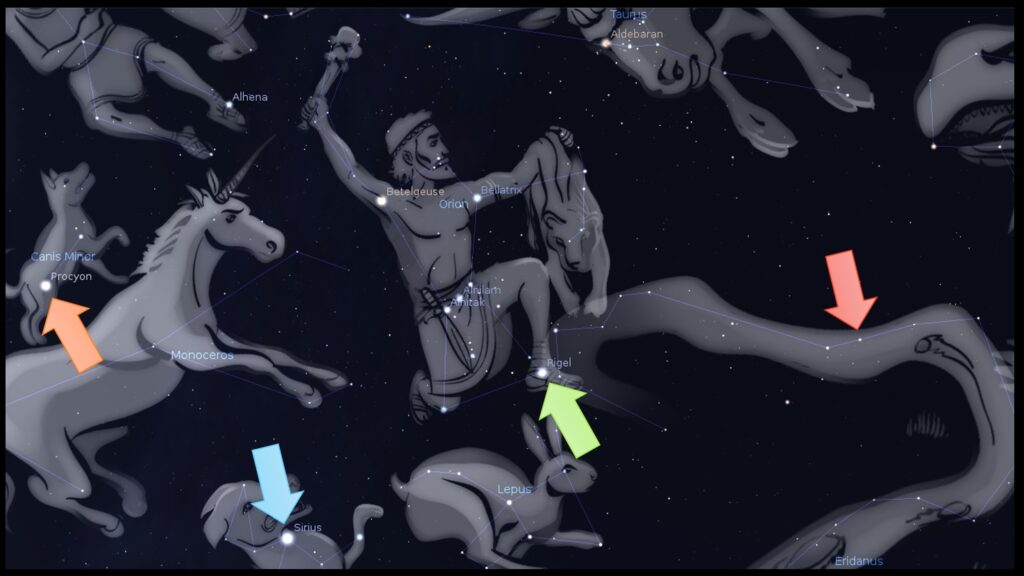 The locations in the night sky of (from left to right) Procyon, Sirius, Rigel, and Epsilon Eridani.

*All data on nearby stars are from Celestia, version 1.6.1.
*~Pun absolutely intended.
~*That is sixth magnitude or brighter (for those familiar with the magnitude system).