Tomorrow is the Baptism of the Lord, the end of the Christmas season which began on December 24.  So today is still Christmas, and that means a post about the 2020 “Christmas Star” is still appropriate!

In my hometown of Louisville, Kentucky the weather was persistently cloudy across mid-December.  I did not have my hopes up for seeing the Great Conjunction.  So when the weather folks started mentioning that the sky might clear a bit the night of December 20, I decided that, if clear weather did come, I would make a big fuss over getting out a telescope.

December 20 dawned as grey and dreary as the previous who-knows-how-many days had been, and by 2:00 PM it was still grey and dreary.  But then, around 3:00, the sun started to break through, and before long the weather was absolutely gorgeous.  So I started text-blasting my neighbors, telling them that I would have a telescope set up on the corner of our block that has a clear view of the south-western horizon.  Would anyone show up?  I did not know.  After all, the news was saying the Conjunction was the 21st (but the weather was saying the 21st would be cloudy).

But as I carried my 127 mm Maksutov down to the corner shortly after sunset, there was one of my neighbors, Bruce, waiting on me.  And more arrived.  We saw “The Christmas Star”!  It was cool.  I even got a terrible photo of it through my telescope, as did various neighbors.  Even if the weather was bad the next day, we still had seen the Conjunction, mostly.

But lo! and behold!  December 21st arrived, and again the evening was clear!  The weather folks had been wrong.  So once again, a text blast (plus a couple of neighbors who missed the 20th asked if I would be going back out), and again quite a few people showed up—as did another telescope.  Plus, some people dropped by who were just driving or walking around looking for a good place to view the Great Conjunction.  A few people who had been there the previous night returned.  So now we had two telescopes (with different magnifications and fields of view) trained on Jupiter and Saturn.  Again, I got a lousy photo that I was nonetheless very pleased with. 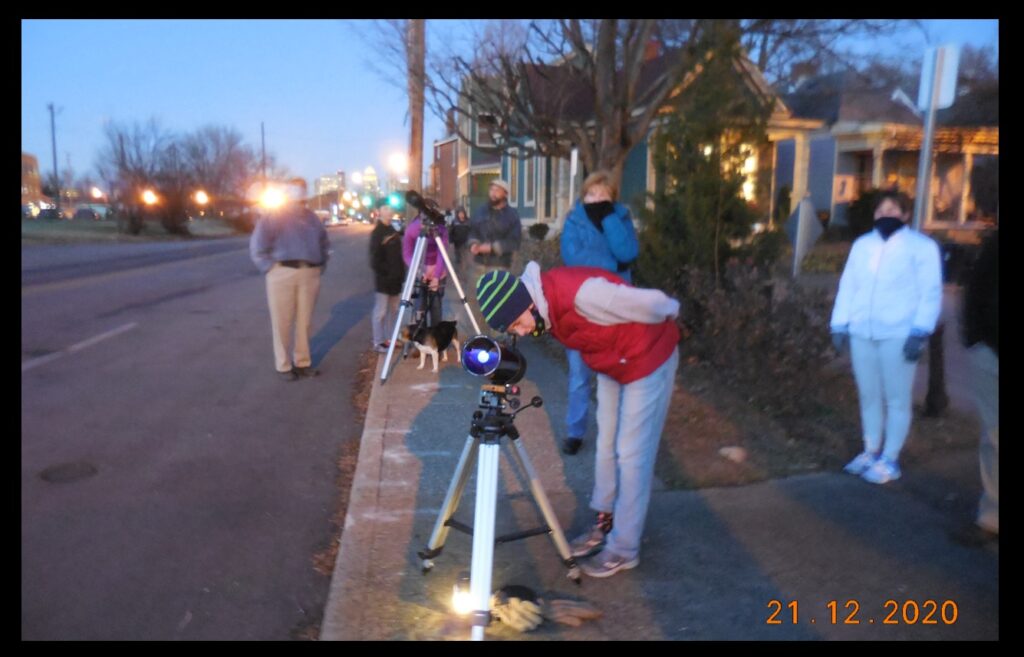 Some of the neighborhood out to see the Great Conjunction of 2020 on December 21.  We are not at the darkest location (you can see the skyscrapers of downtown Louisville in the background) but we did not really need dark skies for this viewing.

Then, the sky turned out to be clear on the 22nd.  Once again, the telescope was set up on the corner.  Once again, people showed up.  This time I got a photo that was a little better.

Seeing both Jupiter and Saturn together in the eyepiece was very cool.  The interesting thing is that most of the neighbors looking through the scopes were less amazed by that than by Saturn’s rings—after all, quite a few were seeing planets through a telescope for the first time, and so they would not know how unusual is the sight of two planets together in the eyepiece.

This lousy photo shows the difference in brightness between Saturn (on the left) and Jupiter.

I particularly liked how it was possible to compare the brightness of the moons of Jupiter and Saturn to each other, and the disks of Jupiter and Saturn to each other.  Jupiter’s disk was clearly whiter and brighter in color than Saturn’s.  This shows even in some of my lousy photos.  But more dramatic were the moons—Jupiter’s four Galilean moons appeared much brighter and much larger in the eyepiece than did Saturn’s moon Titan.  There was also a star lying in the plane of the Jovian moons, and it was interesting to compare it to the moons, too, and to see how it moved through the Jovian system.

Another really cool thing was seeing with the naked eye how the two planets dramatically changed positions over the three nights.  On the 20th Saturn stood right above Jupiter, at about the 12 o’clock position.  On the 21st it was at about the 1:30 position, and closer to Jupiter.  On the 22nd it was at about 3:30, and farther away again. 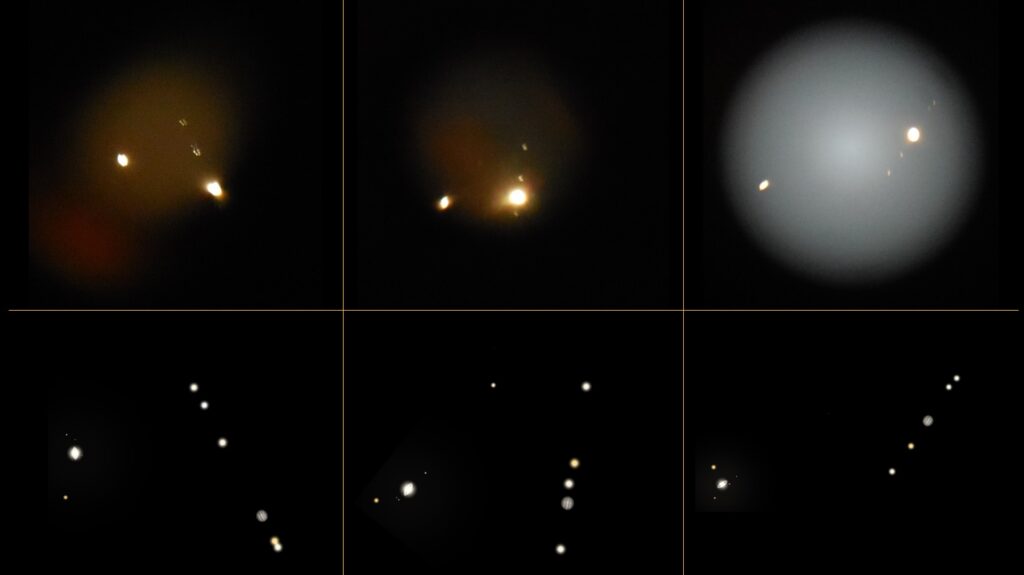 The top row are my lousy astrophotos, taken on (from left to right) December 20, 21, and 22.  The bottom row are simulations of the same photos using the Stellarium app.  The app shows faint things too brightly (the extra moon in the December 20 simulation is the star HIP 99314, which is much fainter than the Jovian moons), but still more or less replicates my photos.  My photos may be lousy, but they give a much better impression of what was visible through the eyepiece than do the simulations.

A third really cool thing was how various people had heard that this was like the Star of Bethlehem, or that it was in fact the Star.  This allowed me to pontificate on my favorite Star topic, that according to Matthew’s gospel the Star was not noticeable to anyone but the magi—the astronomers—until they pointed it out to others.  Matthew reports that Herod had to ask when the Star appeared; it could not have been something real obvious.  And thus probably the Great Conjunction really was like the Star of Bethlehem: people understood that it was something remarkable, not to be seen in centuries, but except for their having read about it or having had it pointed out, they never would have noticed it.  Several people commented that what they read in the media had led them to think the Conjunction would appear as something truly brilliant, and that could only be seen on the 21st.

So it really was a great conjunction, a great Christmas Star!  Three great clear nights, on the three optimal nights for viewing.  The weather was cloudy as can be on the 23rd.  I did not care.

The conjunction (arrowed) seen over the top of my telescope.  The inset shows it under darker skies—and a less steady hand.