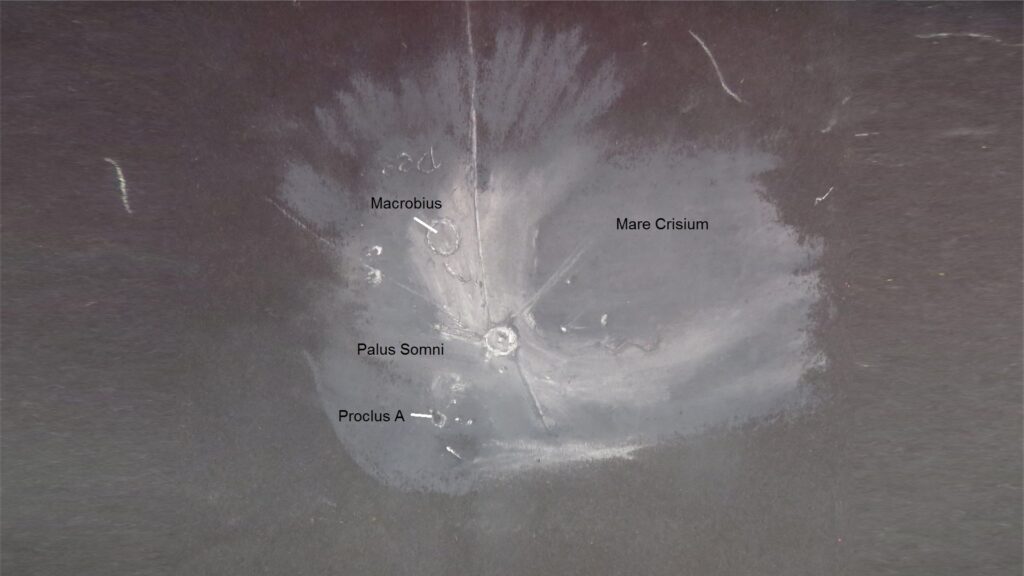 This is a drawing I produced back in 2006. It shows the very bright impact crater Proclus with its radiating ejecta rays. That week brought several days of rain which helped clear our atmosphere of dust. This cleansing precipitation subsequently helped to sharpen up my view of Proclus.

Craters with ejecta rays are always attractive to the eye. An impactor that leaves behind an excavated hole while distributing its interior in the form of bright rays makes a forever statement. There are thousands of craters on the moon, but the impact craters with rays bring something unique to the vista. Tycho in particular has rays so long that they visually offer curvature to the lunar orb. Like the fingers of a hand holding the moon in space.

Proclus stood out white and proud with beautiful rays emanating from its rim. Macrobius above it just a faint circular sun-kissed line. The impactor that created Proclus left behind this very distinct crater and a puzzle. Why are there no ejecta rays over the area called Palus Somni? Over the years, there have been several ideas on the subject of the missing rays. Not all as sensible as the clarification below.

Recently I was reading an explanation by Charles A Wood. In his book The Modern Moon – a personal view – he makes the point that ‘Palus Somni is simply the ray – excluded zone of the Proclus oblique impact. ‘ He qualifies this by saying

” when the impact angle is less than 15 degrees, the ejecta pattern becomes elongated in the downrange direction, and a ” forbidden zone, ” where no ejecta rays appear, develops in the uprange direction.”

Imagine being present on the moon within the area of Palus Somni during the impact that created Proclus. The comet or asteroid would have flown over your head. The impact perhaps moving the surface under your feet. Hitting the moon so hard that an 18-mile (28km) wide crater was created before you in an instant. Palus Somni, aka The Marsh of Sleep, now edged in the open rays of ejected material. Perhaps to sleep no more.