The concept of time on this Earth is a fictitious delusional notion to facilitate human beings to operate collectively and individually. We humans live on this Earth as it is moving through space and time at 18.5 miles per second.

The imaginary line through Greenwich in London gives us a vertical starting point for longitude at zero. East away from zero adds positives in time and west away from zero produces negatives from time zero. A straight line south of Ireland reveals that vast areas of Africa and Antarctica share the same time zone as we do.

The ancient Egyptians were the first to understand and put to use the concept of a year. The Egyptians kept accurate astronomical records on papyrus scrolls circa 4,500 BC. Through careful astronomical observations they realised that Sirius one of the brightest stars in the sky was visible rising next to the sun every 365 days. Exactly the days the earth takes to orbit the sun once, the fact we all accept now as a year.

The Egyptians used obelisks as shadow clocks and used markers on these to indicate what was close to the hours we know today. They used the motions of the moon, the sun and the stars to help them pin point time and seasons and predict floods, and plant crops.

The Egyptians learned to mark time at night with a device called the Merkhet which was lined up with the pole star. The pole star never sets, i.e. it never goes below the horizon. Standing facing north an imaginary line arced above ones head to the horizon directly behind is known as the meridian. The Egyptians marked time by watching the interval of stars crossing the meridian.

Given that the vast majority of human beings accept the yearly time concept and operate under it. It’s interesting to see how cultural differences place people at variance with this time model while living by it.

There is also the confusing matter of calendars and time being relative to the perceived birth or death of some significant historical figure like Christ A.D. ( anno domini) in the year of the lord and B.C. (before Christ.) In the amazon rainforest in Brazil there is the Piraha tribe who have no concept of time whatsoever. There is no past for them,everything exists in the present ,they truly live in the moment .

Given that the Earth is 4.56 Billion years old perhaps it is sensible to have the present year reflect that fact. Taking this notion to the ultimate and accepting that the Universe is estimated to be 13.5 Billion years in existence we then have in 2017 a very tiny numerical description of what year it actually is, and where we at the moment are in the scheme of things. The Gregorian calendar is the most widely accepted marker of days and months as it is the most scientifically accurate solar calendar in use today. However no one really knows what time it is for certain, as no one really knows when time began. Culture is that sort of label of identity that somehow brands a collective of people with one impression. Groups of people in differing cultures can share the same attitude to time and time management.

The Chinese it seems tend to be polychronic in their approach to time and behaviour in time. They view time as cylindrical and tend to do many things at once. They are perfectly content to arrive late to meetings and expect their appointments to arrive late also. They would put time into building a relationship or bond on which to base business dealings.

An example of the Chinese attitude to time is encapsulated thus, when Mao Tse Tung was asked what he thought of the French revolution he replied “it’s too early to tell” an amusing quip illustrative of the cylindrical model of time, which Chinese people enjoy. They seem to slide up and down the cylinder, inside and outside of it at their leisure, operating time to suit themselves and their ways of doing things in life and business.

The Monochronic person on the other hand operates in a time line, linear behaviour, one thing at a time. Lateness is not an option and interruptions are not welcome either. Sticking to schedules is favoured and plans are fixed, plans are vital and upset is caused by changing them. No one culture is completely polychronic or completely monochronic there are blendings in individuals and in societies across the world.

Against this background of trends in different cultures like the US and China, I find the concept of electronic communication fascinating. I write an e-mail here in Ireland for instance send it at 6pm local time to California which is 8 hours behind us. The message instantly arrives in Pacific Daylight Time, for breakfast, a little moment transported through time travel via the vehicle of e-mail.

The Aboriginal concept of Dreamtime is one of the oldest intellectual ideas about time on the planet; their culture has been around for 50,000 years. They see the Dreamtime as a place or a condition external to time and space where all things exist at once. A sort of time travel convergence of past present and future. Their beliefs also include the idea that everyone has a part of themselves that exists in this Dreamtime and that this external existence is perpetual and infinite. They try to live their lives in symbiosis with and in respect for this Dreamtime.

Ireland had its own time zones up to October 1916 when the Time Ireland act came into being thereby linking time in Ireland to GMT . This was of course a very practical convenience for trade and communication. It cured the 25 minutes and 21 seconds time lag between the two islands. A political act in changing time as if by magic.

Whatever our way of time behaviour here on Earth, we are all on the same planet moving through space. With each trans Atlantic flight we gain a tiny bit of time. Space travellers gain more time relative to earth-bound travellers. Space travellers become time travellers as space vehicles and propulsion improve. This is a very linear concept that works both ways, forward and backward.

Radio signals travel at the speed of light and have been doing so for over one hundred years. All these sounds travelling upward and outward for all that time,into the immensity of space. The sounds of various cultures of the Earth thus exposed, and open to scrutiny perhaps in time by extraterrestrial cultures.

Sound can travel in space, as space is not a total vacuum; interstellar atoms of gas and dust give space the potential to carry sound. Sensitive devices not human ears are needed to detect sounds in space as the frequencies are very low. In 2003 astronomers detected the deepest note ever generated in the cosmos, a B-flat flying through space like a ripple on an invisible pond. No human will actually hear the note, because it is 57 octaves below the keys in the middle of a piano. The sound waves appear to be heating gas in the Perseus galaxy cluster, some 250 million light-years away. The gas is apparently dancing excitedly to the eons-long drone of a deep B-flat. The detection was made with NASA’s Chandra X – ray Observatory.

In 2018 the world will see the launch of the James Webb Space Telescope. This will be our best effort so far to look back in time and deepen our knowledge of the formation of the universe as we know it. A complex and beautiful machine which will surpass Hubble in its visual and scientific data gathering.

The Egyptians build timeless tombs for their exalted leaders and added to our organisation of time. They marked their time on Earth very significantly, as did many cultures. Space exploration marks our human exploration efforts in time stamps on the road to understanding of the origin of humanity. 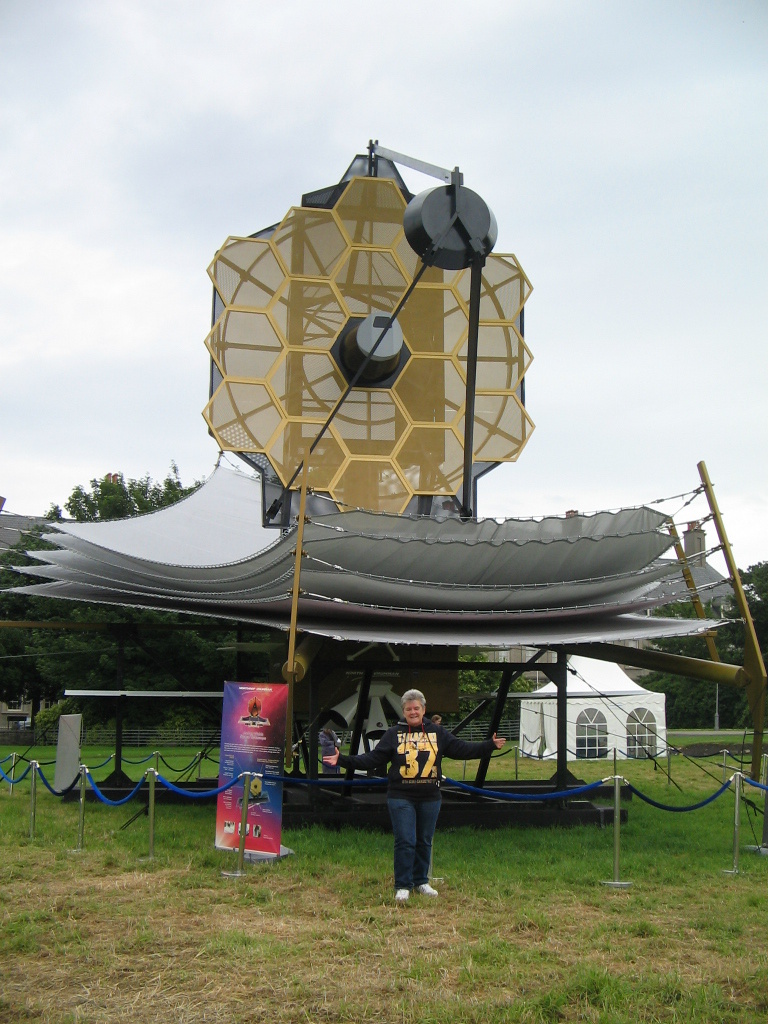