A boulder-sized asteroid designated 2018 LA was discovered Saturday morning, June 2, and was determined to be on a collision course with Earth, with impact just hours away. Because it was very faint, the asteroid was estimated to be only about 6 feet (2 meters) across, which is small enough that it was expected to safely disintegrate in Earth’s atmosphere. Saturday’s asteroid was first discovered by the NASA-funded Catalina Sky Survey, located near Tucson and operated by the University of Arizona.

Although there was not enough tracking data to make precise predictions ahead of time, a swath of possible locations was calculated stretching from Southern Africa, across the Indian Ocean, and onto New Guinea. Reports of a bright fireball above Botswana, Africa, early Saturday evening match up with the predicted trajectory for the asteroid. The asteroid entered Earth’s atmosphere at the high speed of 10 miles per second (38,000 mph, or 17 kilometers per second) at about 16:44 UTC (9:44 a.m. PDT, 12:44 p.m. EDT,6:44 p.m. local Botswana time) and disintegrated several miles above the surface, creating a bright fireball that lit up the evening sky. The event was witnessed by a number of observers and was caught on webcam video.

Discovery observations of asteroid 2018 LA from the Catalina Sky Survey: 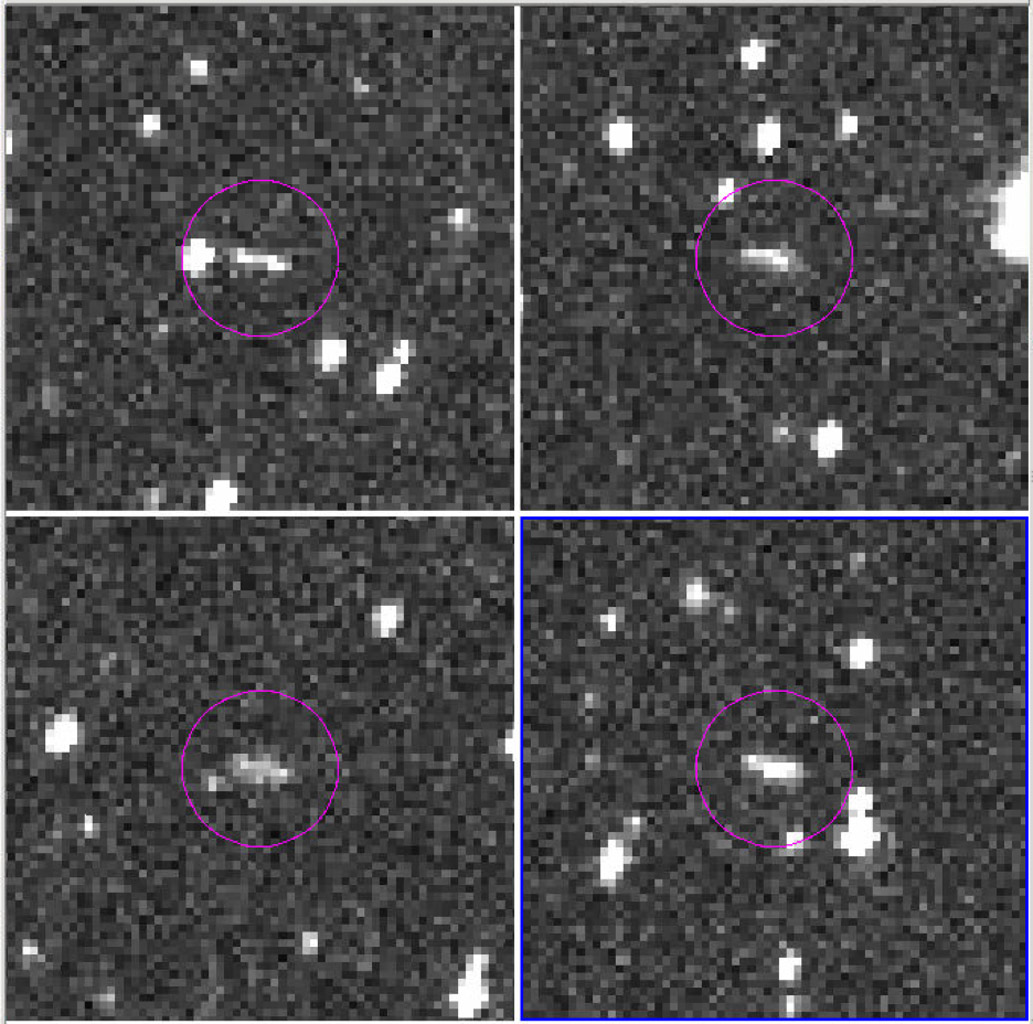 When it was first detected, the asteroid was nearly as far away as the Moon’s orbit, although that was not initially known. The asteroid appeared as a streak in the series of time-exposure images taken by the Catalina telescope . As is the case for all asteroid-hunting projects, the data were quickly sent to the Minor Planet Center in Cambridge, Massachusetts, which calculated a preliminary trajectory indicating the possibility of an Earth impact. The data were in turn sent to the Center for Near-Earth Object Studies (CNEOS) at NASA’s Jet Propulsion Laboratory in Pasadena, California, where the automated Scout system also found a high probability that the asteroid was on an impact trajectory. Automated alerts were sent out to the community of asteroid observers to obtain further observations, and to the Planetary Defense Coordination Office at NASA Headquarters in Washington. However, since the asteroid was determined to be so small and therefore harmless, no further impact alerts were issued by NASA.

“This was a much smaller object than we are tasked to detect and warn about,” said Lindley Johnson, Planetary Defense Officer at NASA Headquarters. “However, this real-world event allows us to exercise our capabilities and gives some confidence our impact prediction models are adequate to respond to the potential impact of a larger object.”

The ATLAS asteroid survey obtained two additional observations hours before impact, which were used by Scout to confirm the impact would occur, and narrowed down the predicted location to southern Africa. Infrasound data collected just after the impact clearly detected the event from one of the listening stations deployed as part of the International Monitoring System of the Comprehensive Nuclear-Test-Ban Treaty. The signal is consistent with an atmospheric impact over Botswana.

“The discovery of asteroid 2018 LA is only the third time that an asteroid has been discovered to be on an impact trajectory, said Paul Chodas, manager of the Center for Near-Earth Object Studies (CNEOS) at JPL. “It is also only the second time that the high probability of an impact was predicted well ahead of the event itself.”

The first event of this kind was the impact of asteroid 2008 TC3, which lit up the predawn sky above Northern Sudan on October 7, 2008. That was a slightly larger asteroid (about 13 feet, or 4 meters in size), and it was discovered a full 19 hours before impact, allowing for a large number of follow-up observations and a very precise trajectory to be calculated. The second predicted impact event was for asteroid 2014 AA, which was discovered only a few hours before impact on Jan. 1, 2014, in the Atlantic Ocean, leaving too little time for follow-up observations. The Catalina Sky Survey has been responsible for discovering all three of these small asteroids on impact trajectories, and all on the watch of the same observer, Richard Kowalski.

More information about asteroids and near-Earth objects can be found at: https://cneos.jpl.nasa.gov  and  https://www.jpl.nasa.gov/asteroidwatch