On Cemetery Hill in Springfield, Kentucky, in the “Holy Land” of Kentucky, stands a monument “dedicated to those who lost their lives in the Cholera epidemics of 1833 and 1854, and to Louis Sansbury, a black man who cared for and buried the victims in these approximately 106 unmarked graves”. 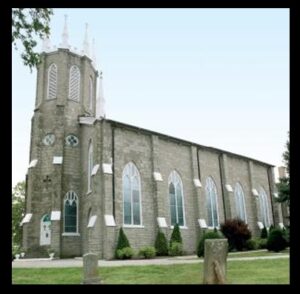 The “Holy Land” in central Kentucky is home to much U.S. Catholic history. Here is where Catholicism first took root away from the coasts as the United States expanded westward. The first diocese in the U.S. was established in Baltimore, Maryland in 1789, but in 1808 four new dioceses were established in the U.S.: the diocese of Boston, the diocese of New York, the diocese of Philadelphia, and the diocese of Bardstown, Kentucky (which later became the Archdiocese of Louisville). Thus Bardstown is home to St. Joseph’s proto-cathedral. The “Holy Land” is also home to numerous churches, many dating back into the late eighteenth century, including the oldest Dominican church in the United States, St. Rose (just outside Springfield). And the “Holy Land” is home to the motherhouses of the Sisters of Charity of Nazareth, the Sisters of Loretto, and the Dominican Sisters of Peace; and to the Trappist Monastery at Gethsemane. A local web site, kyholyland.org notes that—

It is where the first priest to have been ordained in America, Stephen Badin, came in 1795 and set up residence at what is today the Sisters of Loretto, followed by Charles Nerinckx and the Dominican friars in 1805, and Benedict Joseph Flaget in 1811. Flaget, the “First Bishop of the West,” came to shepherd the newly designated Diocese of Bardstown—the first inland diocese in the United States 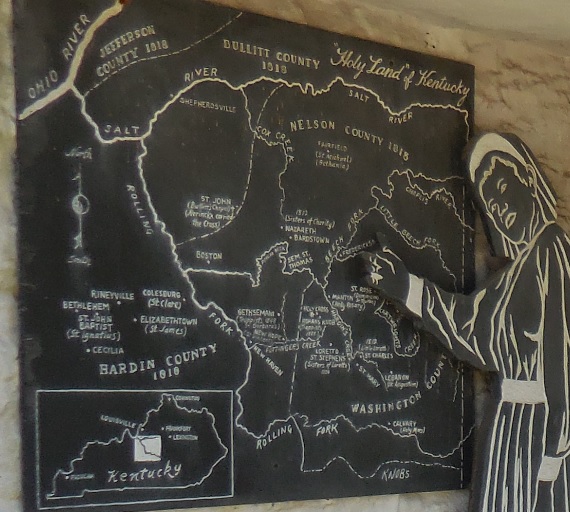 Map of the “Holy Land” of Kentucky (located in central Kentucky between the Salt River and the Rolling Fork) in a diorama at the motherhouse of the Sisters of Loretto.

The Bardstown diocese existed because many Catholics had migrated west from Maryland to Central Kentucky, starting in the late eighteenth century. The Catholic population of this area included many African-American Catholics. These Catholics were for the most part enslaved by their fellow Catholics, including by people associated with the above-mentioned religious orders. One of the founders of the above-mentioned Dominican Sisters was Maria Sansbury (later Mother Angela, the first prioress). Louis Sansbury is buried in an unmarked grave within the St. Rose cemetery.

This memorial in the cemetery of the Sisters of Loretto at the Foot of the Cross, west of Springfield, stands on the site of the graves of those African-Americans who were enslaved by the sisters.

Mimi O’Malley writes in her book, It Happened in Kentucky, that Asiatic cholera came to Springfield in 1833 via people fleeing Ohio River towns such as Louisville and Maysville where the disease had appeared (possibly having come up the river from New Orleans). On June 2 three people died in Springfield from the disease. Fifteen more died in the next two days. O’Malley writes

Springfield residents began to vacate the town, abandoning construction sites and closing businesses. The rapid spread of the disease prompted George Sansbury, a Springfield hotel owner, to hand over the keys to his hotel to Louis Sansbury, his twenty-seven-year-old slave, advising him to take care of the business while he was gone.

A 1903 newspaper article about the cholera epidemic in Springfield notes that other business owners handed over their businesses to Louis, so that he was “the custodian of nearly every store in the town”. According to O’Malley—

Sansbury [and Matilda Sims, a cook] fed and treated cholera victims, both black and white. When someone died, Sansbury and Sims prepared the body, wrapping it in sheets and burying the dead in graves he dug besides the road to the Springfield Cemetery. Why Sansbury and Sims failed to become cholera victims themselves remains a mystery. By the end of the 1833 epidemic, more than eighty deaths were recorded in Springfield [whose population prior to people leaving town was just over 600] alone…. It is not known whether this total includes the number of slave deaths.

Nor it is known why Louis Sansbury stayed in Springfield to do his owner’s bidding during the cholera panic. He could have easily fled, taking this opportunity to find his freedom in the north. It is also not known what kind of medical care he gave to cholera victims.

O’Malley adds that it is doubtful that Sansbury used the accepted treatments applied by doctors of the time to people with cholera: opium, bleeding by lancet as much as a quart of blood, and a mercury compound called calomel. (She notes that it is impossible to know how many people in cholera epidemics died of cholera itself, and how many died from the medical treatments.) We cannot know what Sansbury and Sims did that allowed them to treat others while not themselves getting sick from this highly contagious disease, but we can make some educated guesses.

There are clues that Louis Sansbury was a very capable individual. George Sansbury and pretty much the rest of the town left him in charge of their businesses, and apparently Louis—who, being enslaved, was illiterate—used some sort of self-created written code to keep track of from what businesses he and Sims had taken materials in order for to care for the sick and the dying, and to keep track of things in general in these businesses while George and the others were off keeping safe. Moreover, when George died in 1845 (leaving his slaves to be divided among his children, much like the family china), the town of Springfield purchased for Louis both his freedom and a means by which he could make an independent living: a blacksmith shop. When another cholera epidemic struck in 1854, Louis again cared for the sick and the dying, and again did not get sick himself (he passed away on April 12 of 1861, just as the war that would lead to the end slavery in the United States was commencing at Ft. Sumter).

A person whose fellow men will put their places of business in his trust at age twenty-seven, who with no literacy training develops his own written accounting system, who does skilled, multifaceted work such as blacksmithing—that person seems to me to be one talented and capable human being. I am skeptical that it was by means of blind stumbling luck that Sansbury stayed alive through nursing the sick and burying the dead of two epidemics. Rather, I suspect that Louis Sansbury had, over time, observed the world and made his own notes mentally or in his own code, and had figured out something about how the world works, something that led he and Sims to minimize their risk of becoming victims of the disease which raged all around them. In other words, I suspect that Louis Sansbury was a scientist (this post is part of a collection of posts on the subject of who can do science—click here for the whole series).

Science is good at recognizing certain brilliant people—the Newtons, the Darwins, the Einsteins—but many more people than just “the greats” do science. And being recognized for scientific greatness is helped by being a brilliant person in the right place and time. It would have been difficult for anyone in Springfield, Kentucky in the first half of the nineteenth century to enter the ranks of the scientific elite, no matter how brilliant—and very difficult were that person a woman, and effectively impossible were that person enslaved. A person from that place and time would be much more likely to put to use within his or her community those talents of observation, synthesis of information, etc. that make for a good scientist. The result of this person’s scientific work would not be formal scientific discovery and publication, but rather it would be that his or her community featured bridges and homes better built, or crops better managed and irrigated, or animals better cared for, or better food and clothing, or healthier children in the community, or better care for the sick and the dying. Such a person would be unknown to the formal scientific community, but would still be doing important work with science. 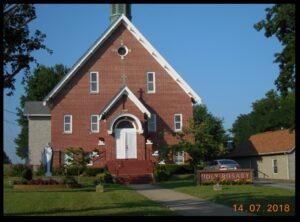 Thus we might also make an educated guess as to why Louis Sansbury did not flee north when cholera provided the opportunity: because this man who cared for the sick and buried the dead, and who himself would be buried at St. Rose, had ties to Springfield—ties of faith, and family, and friendship—and he knew that he had something important to contribute to his community. Were he to leave, Springfield would be worse off.

Springfield now hosts an annual African American Heritage Week, centered on the summer picnic of Holy Rosary Church, a historically African-American parish founded in the 1920’s. O’Malley writes that Louis Sansbury’s heroism inspired Springfield to dedicate its first Heritage Week in 2004 to him. I believe that dedication, and the monument on Cemetery Hill, honor an unknown Kentucky scientist.

Admittedly Louis Sansbury as “unknown Kentucky scientist” is a product of a fair bit of speculation, based on only bits of information. However, someone in Springfield knew how to stay alive through cholera. Mother Angela Sansbury’s Dominican sisters also helped the cholera victims, and they survived the epidemic of 1833 with no deaths. Perhaps the Dominicans conveyed information to Louis, or he to them, or perhaps they worked together in some way to figure out how to care for the sick and the dead without ending up sick and dead themselves.

Monument at the Sisters of Charity of Nazareth cemetery near Bardstown to those African-Americans enslaved by the sisters.

And even if Louis Sansbury is indeed the “unknown Kentucky scientist”, we should keep in mind that he may not be the only unknown scientist buried in an unmarked grave in the “Kentucky Holy Land”. Both the Sisters of Charity of Nazareth and the Sisters of Loretto have erected monuments to the people who were once their slaves. These religious orders were both involved in education, including science education.

It does not seem like too much of a reach to suppose that a person with a talent for observing the natural world, and for pulling together and using the ideas emerging from those observations—the sort of person who comes to know the night sky in detail; or who becomes an expert on the local flora and fauna; or who understands the flow of streams above and below ground in the limestone landscape; or who has a knack for making structures that last, or for helping sick people get better, or for working with metal in a way that seems to produce stronger and better implements—would be able to make a contribution to his or her community, even were he or she enslaved. This would seem all the more true when that community has a focus on education, and when money, people, and resources are not available in abundance. It seems to me that the whole world must be dotted with tombs of unknown scientists.

Images of enslaved people in the “Holy Land” of Kentucky are not easy to find, but within the heritage center of the Sisters of Charity is this portrait of Monroe Smith of Nelson County, Kentucky, who was born in 1848, freed when slavery was abolished in Kentucky in 1865, and died in 1947. He spent the last 35 years of his life living and working among the sisters, and is buried in their cemetery. Like Louis Sansbury, he chose to stay in his community.