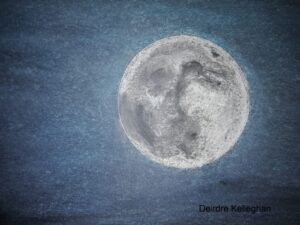 Observing the moon during a total lunar eclipse can be very exciting. The colour is unpredictable and can vary in tone, shade and intensity according to the condition of the Earths atmosphere at the time The first one I ever viewed was back in 1992. The moon looked like a huge steel ball in the night sky, grey with a hint of blue.   Back then I wasn’t practising astronomical drawing at all but I have memories of recording it on an old video camera. The Earths atmosphere was full of dust from the volcanic eruption of Mt Pinatubo located in the Philippines.

This months total lunar eclipse brought back many memories of previous efforts to capture these short-lived but very interesting events. I wondered if the eruption of Krakatoa would have a noticeable effect on January 21st 2019.

I decided to draw the full moon earlier that evening without using the telescope. The sky was crystal clear if only it would have stayed that way.  The forecast for later  was dismal so a detailed sketch was out of the question.  I used a CD for the outline, fingers and pastel for the distant detail. I disregarded the mountain below the moon and the contrails visible at the time.  This drawing would be altered  to include the developments as the moon passed into the shadow of the Earth. 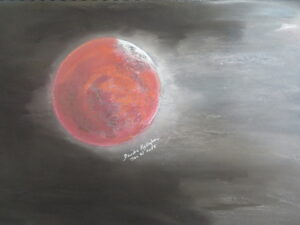 Later that night, the  Moon was in and out of view for brief seconds as were the stars Castor and Pollux. An aeroplanes lights blinked its presence, before vanishing in the ghostly night. I had several seconds of viewing between 04:04 UT and 05:02 UT that was it. A dark spooky, misty, hazy view for me. Just seconds to sketch when the moon escaped that black cloud which was darker than the night sky itself. Overall the moon looked dark red to my eye. Difficult to scale Danjon wise as it was a series of fleeting views in an otherwise hazy sky.

In September 2015 the lunar eclipse called me to draw it with gusto using my 8 inch dob. With the knowledge of a clear sky the time that can be invested in a drawing can be increased. More pre-planning can be achieved and hopefully more detail captured.  First I drew the entire full moon earlier in the evening. Later the colour was added naked eye to the same drawing.  The problem with this is that it is easy to obliterate previously drawn details that you have worked hard to capture.  Every drawing of this nature has its idiosyncrasies and challenges. 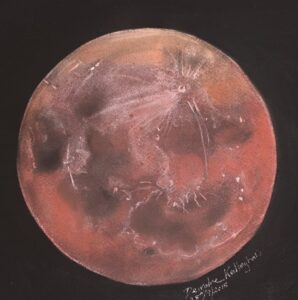 “It is a most beautiful and delightful sight to behold the body of the moon.” Galileo Galilei – Sidereus Nuncius

December 2010 on the eve of the solstice, thick snow-covered my garden, it was minus 7 Celsius. The full moon was to enter the shadow of the Earth in the early hours of December 21st. I therefore decided the drawing would have to be small as it was so cold and conditions were unpredictable. On that occasion I also used a CD to make my moon circle. The progress of that drawing ( step by step) is featured in a book I collaborated on  with several other astronomical artists. Sketching the Moon an Astronomical Artists Guide.

It was wonderful to see all the total lunar eclipse images on SpaceWeather. A night sky event for so many counties on the planet.  Always worth looking at even if it’s a momentary view.