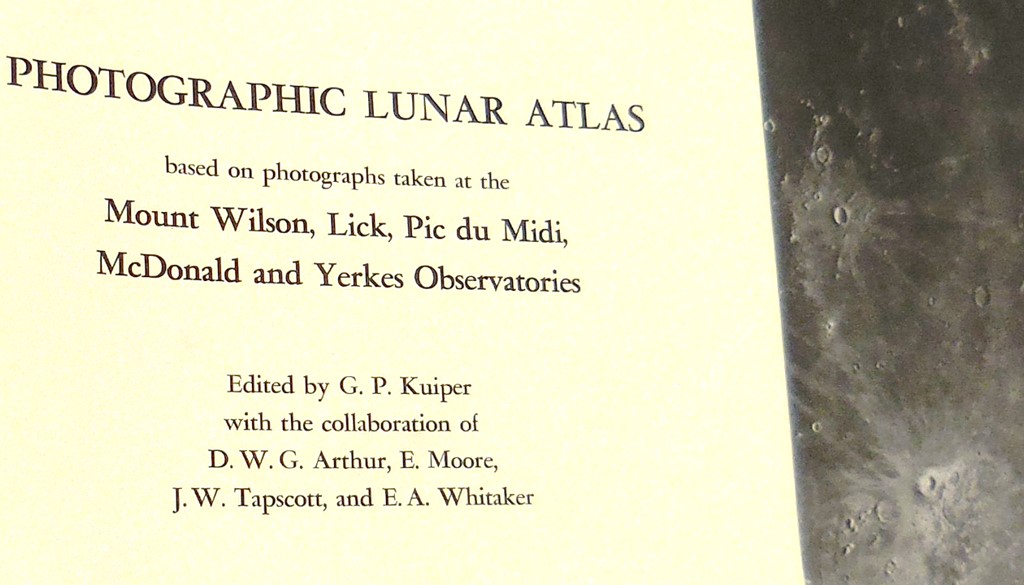 Last month I (Chris Graney) spent a couple of weeks at the Vatican Observatory at Castel Gandolfo, and while there I had a key to the library!  This is part of a series of short posts (click here for the series) on the cool things that are on the shelves there.  There were so many cool things, sometimes it was hard to focus on a single one.

Nothing catches the eye like Big Stuff, and perhaps the most prominent Big Thing on the library shelves was a huge book that said on the binding, “Photographic Lunar Atlas: Edited by Gerard P. Kuiper”.  So, I hauled it down to look at it.

It was not a book, actually.  It was a big box, full of high-quality pictures of the moon.  It was published in 1960 by the University of Chicago Press.

Kuiper’s name is likely familiar to many Sacred Space Astronomy readers.  The “Kuiper Belt” of small objects orbiting beyond Neptune is named for him (Pluto is a Kuiper Belt object—the first such object to be discovered).  According to NASA, “Kuiper (1905-1973) is regarded by many as the father of modern planetary science” (interestingly, the photo of Kuiper on the NASA page that was the source of this quote shows him holding what appears to be the Photographic Lunar Atlas).

The “Introduction and Summary” for the atlas states,

The purpose of the Atlas is to present the surface record of the moon as shown on the best photographs now available.  The selected photographs were taken at five observatories, Mount Wilson, Lick, McDonald, Yerkes, and Pic du Midi.  The best resolution is about 0՛՛.4 [sic] corresponding to about 0.5 miles or 0.8 kilometers. This matches the optical resolving power of an 11-inch visual telescope used under perfect conditions….

An 11-inch (28-cm) telescope is not the reference I was expecting!  How about that?

Digital stuff is great in that it is easily accessible and easily searchable, but it does not have the tangible coolness factor of a thing like this, found on a library shelf. Check out the photos below. Note the book and pencil for size comparison!

I told Br. Guy about this find, and he wrote:

I know that Atlas intimately.

The authors of the Atlas are listed as D. W. G. Arthur, E. Moore, J. W. Tapscott, and E. A. Whitaker. Of those, the only one I knew was Ewan Whitaker. I arrived at the University of Arizona Lunar Lab (as it was known then… “Planetary” added later) in the spring of 1975, two years after Kuiper’s death; but by the time I got there, Bob Strom had joined the faculty. Strom taught us a course about the Moon, with Whitaker as an occasional guest lecturer, that relied heavily on this atlas.

One of the projects we all had to do was to use the images of this atlas to learn how to make geological maps. We would lay thick pieces of plastic on top of the images, and trace out boundaries of geological features, then classify those features and color them in accordingly. It was a classic case of learning by doing. No, our maps did not replace the official USGS maps; they were entirely to teach us what to look for.

I got to do one of the most interesting regions, right around Mare Vaporum and Rima Hyginus. If you look at the full Moon image, which shows you the light regions and the dark regions, you’d draw one sort of boundary; if you look at the half-moon region, where surface roughness shows up clearly, the boundaries are completely different. In fact, it looks like this was an area that was covered by a thin flow of lava, enough to turn it dark without effacing the roughness from an early epoch of impact cratering. Suddenly the history of this area, with the relative sequence of what happened first, what happened later, became obvious…