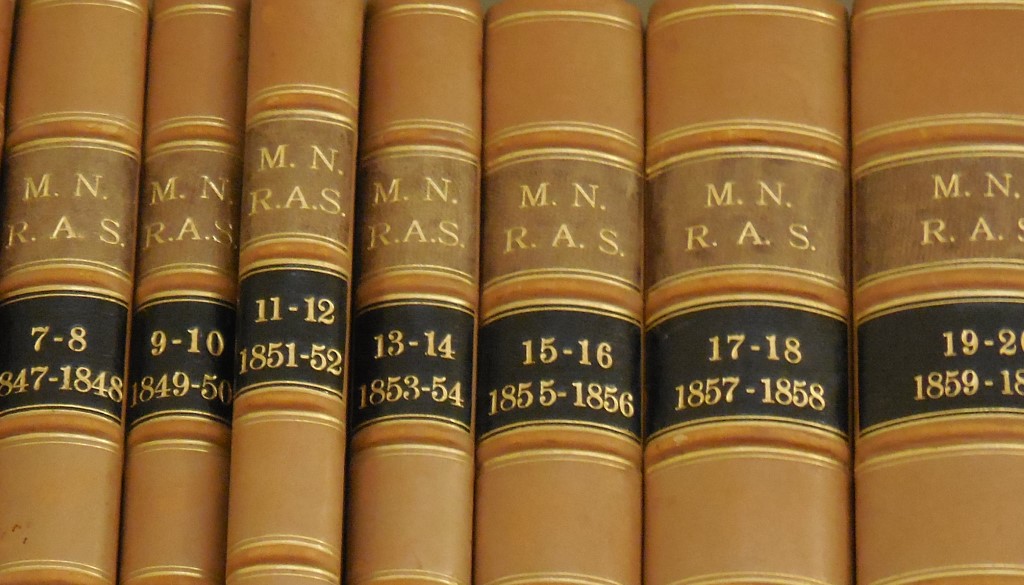 In June I spent a couple of weeks at the Vatican Observatory at Castel Gandolfo… with a key to the library!  This is part of a series of short posts (click here for the series) about the cool things that are on the shelves there.

Something that immediately catches the eye when a person steps into this library are the shelves full of astronomy journals. Some of the journal collections go back decades—and some go back further.  Just inside the door are volumes upon volumes of the Monthly Notices of the Royal Astronomical Society, or MNRAS.  The volumes run from 2007 all the way back to the start of the MNRAS in the early nineteenth century.

MNRAS is still being published (more on why the VO’s MNRAS collection stops in 2007 below).  Indeed, while I was at the VO, Fr. Richard D’Souza, S.J. announced a new publication, in MNRAS.  His paper (with other authors), titled “New Globular Cluster candidates in the M81 group” appeared in on-line form on June 16.  Click here for that paper.

Wikipedia tells us that—

—and looking at the VO’s collection shows that Wikipedia is right!

The collection stops at 2007 because by then the VO astronomers had settled on digital access as the way to get their journals.  Digital access makes sense for many reasons, one of which is readily apparent just from looking at the shelves: the first bound book of MNRAS issues on the library shelves is modest-sized and contains two whole volumes spanning from February 1827 to June 1833; by contrast, the last fully bound book of MNRAS issues is over twice the thickness of that first book, yet only covers one quarter of the year 2003.

This is true for most of the VO’s journals.  If the library kept taking paper journals, before long the VO would need to build a new library! There are questions about digital access, of course.  In a century, the VO will still have these volumes if it so chooses.  Will digital access be so enduring?  I hope there are still a good number of libraries (blessed with huge amounts of space) taking paper copies of MNRAS and other journals.

How scientific ideas get published is a fascinating topic. At the beginning of the scientific revolution, there were certain individuals who acted as nodes of communication. People like Henry Oldenburg, Marin Mersenne, and Athanasius Kircher would get letters from around the world from people who had made discoveries, and then distribute these ideas to their network of correspondents.

Kircher himself was a Jesuit and quite a character. Kircher’s books in particular can also be found in our library and they are a collection of an amazing variety of materials, some of it groundbreaking and some of it utter nonsense, all presented without editorial comment.

Oldenburg was the first secretary of the Royal Society and in 1665 he began publication of The Philosophical Transactions as the first scientific journal. Nonetheless, such journals were rare even as late as the 19th century.

In nineteenth century astronomy, the scientific work of a given observatory would be collected and published generally once a year in an annual periodical, distributed to all the other observatories,. The authorship was generally under the name of the observatory’s director, regardless of who actually did the work.

The tradition of annual reports has generally faded over time and nowadays if such are published at all, they are no longer compilations of scientific papers but an overview written for a more general audience. You can find the annual reports of the Vatican Observatory at https://www.vaticanobservatory.va/en/publications/annual-report.