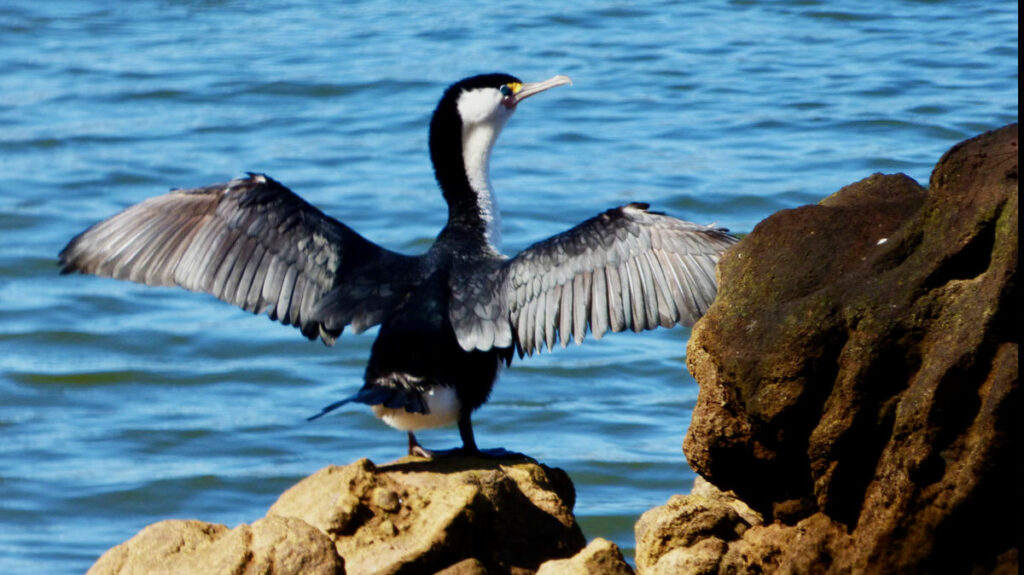 My friend Gino Acevedo sent me this photo of a cormorant from when we first met on Great Barrier Island, New Zealand, back in 2016…

And then I wrote… In December of 2017 the publishing house connected to the Catholic newspaper Our Sunday Visitor commissioned me to write the text for a little pamphlet on faith and science. The following was published and distributed to parishes in the US in mid 2018. Regular readers will recognize most of the content, but it’s nicely packaged here!

St. John Paul II once wrote that faith and reason are “two wings on which the human spirit rises to the contemplation of truth.” The idea that faith and reason work together can sound startling to people who think that the two are somehow opposed to each other. But when you look more closely at how faith works, and how reason works, then you can see that the Pope had it right. Neither faith nor reason can operate alone. Each requires the other.

Consider how this argument plays out in the common assertion that somehow science and religion are at war. Many people see religion and science as two competing sets of truths: two big books of facts. And they worry, what should happen if the facts in one book contradict the facts in the other?

But faith is not based on rigid certainties that can fit in a book. Indeed, it is just the opposite. The writer Anne Lamont (echoing the theologian Paul Tillich) put it nicely: “the opposite of faith is not doubt; the opposite of faith is certainty.” If we had certain knowledge, stuff in a book, then we wouldn’t need faith. In the same way, science doesn’t consist of just the formulae and answers in the back of the book – even if sometimes that’s how it is taught in high school! If science is just a big book of unchangeable facts, then why is it that actual science textbooks go out of date so quickly?

We sometimes hear the phrase “blind faith” and think that faith means accepting something as certain only on authority, because somebody says so, without looking further… closing your eyes to the facts and proceeding on emotion. But that’s not faith at all. To the contrary, remember what Moses said to his people after giving them the Tablets of the Law: “Do not forget the things your eyes have seen or let them fade from your heart as long as you live. Teach them to your children and to their children after them.” He doesn’t say, “close your eyes” but rather, “teach what you have seen.”

Blind faith is not walking with blindfolds, ignoring the truth. It’s proceeding after we’ve done everything we can do to see the truth, but still can’t see everything.

After all, it is on the basis of both reason and gut feeling that we make all the big decisions of our life. Whom should we marry? What career should we pursue? Where should we live? We never have enough “data” to know with absolute certainty the right thing to do. All of life is making crucial decisions on the basis of inadequate information. But even though we don’t have full knowledge of the truth, we still have to choose. If we knew the answer perfectly and without doubt, we wouldn’t need faith. Faith is what we rely on when we don’t have certainty.

And how do we make these decisions? What do we base our faith on? We look at all the information we can get. We also listen to all the authorities whom we can trust… our parents, our friends, our school counsellors, our local clergy. Then we apply our imagination to see what it might be like to be in one situation or another; and we decide which choice makes us feel right in the long run. It’s data, and reason, and authority, and finally gut instinct… all rolled together.

Indeed, like what happened with Moses on the mountain, every religious experience begins with… well… an experience. Every act of faith begins with a new and startling thing that has happened to us: the voice of God on a mountaintop, or a still small voice within us that calls us to some new and unexpected action. We use faith to move forward when we are confronted with an experience that demands we make a choice.

We find the same situation in science. Science seeks to find a deeper understanding of nature that goes beyond the textbooks. Our goal in science is not just to come up with the most accurate equation to match the data. After all, a computer can arbitrarily fit an equation — more than one equation! — to any set of data points. But if our goal is to find a description of nature that not only matches the data but also gives us insights as to what’s going on, then we need to judge all the different solutions that a computer might give us and ask our intuition to help us decide which answer deserves our faith, which one seems most likely to lead us to understand the bigger puzzle we’re trying to solve. And that’s why, as we learn more and understand more, we let our ideas grown and change.

For example… ancient astrologers could predict eclipses and the positions of the planets using Aristotle’s physics, the best science available for 1500 years. But Copernicus, Kepler and Newton (all devoutly religious men, by the way) worked out a new description of the motions of planets that not only gave good predictions; it led to a new understanding of how nature itself works, including a force we now call gravity.

Notice two things here. First, no matter how well established a bit of science may appear to be, we can never predict how our explanations might change in a hundred or a thousand years’ time. Or even next week! And second, good science is not just getting the right answer, it’s getting an answer that leads to new insights. But since our criteria for what makes a good explanation depends on our very human instincts about whether or not an insight is useful, likely to lead to a deeper understanding of the truth, then that judgement is not one that can be determined by reason alone.

It can take years of work before we know if a particular insight bears fruit. When we have to choose which insights to pursue, we are in the same position as the person who tries to decide where to live or whom to marry. There’s no way to know ahead of time if we’ve made the right choice.

Science, of course, is based on both collecting data and then reasoning about it. It’s no surprise that our scientific ideas might change as we get more data. Yet the principle that reason needs faith is found even in a field like mathematics.

Unlike science, math actually does attempt to come up with eternal proofs. The geometry that Euclid came up with in ancient Greece is still true, even while the physics that Aristotle taught is now completely discarded.

But even Euclid’s geometry is not the last word. To do geometry (or any other kind of logic) you have to start with assumptions, called axioms. These are assumptions that seem so self-evident that you can assert they are true, without proof. Only then, based on those assumptions, can you use reason to arrive at firm conclusions about things that are not as obvious as those axioms. The choice of axioms, choosing your assumptions, is key. Over the centuries, mathematicians have learned that you can relax one or another of Euclid’s axioms and invent whole new mathematics, like the geometry on the surface of a sphere instead of a flat plane.

We must accept “axioms” on faith. Before we can reason, we must have faith in our ability to judge what is reasonable.

That is why no mathematical “proof” of the existence of God (or of His non-existence) can ever be valid. God is not something that we arrive at by following some chain of reasoning. Rather, God is one of the key assumptions that we start with (or don’t) when we begin to try to use reason to understand the universe.

It is possible to declare that one does not believe in God, and then construct a logically self-consistent system that explains the universe in terms of, say, accident or rigid necessity. (It’s tougher to explain where those laws of chance or rigid necessity came from, or course.) But one can also assume the truth of a God, indeed the personal God of Love as found in Scripture, who has willed this universe into being; and with that assumption, also derive a logically self-consistent universe.

How do you choose between these two possibilities? Study the universe. Listen to the authorities who have proved trustworthy to you in the past. And, at the end of the day, ask yourself which explanation, the one with God or the one without, satisfies both the data of science and the instinct of the human heart.

Faith and reason do not compete. Faith is the foundation on which we can build our systems of reason. But just as reason is built on faith, so our faith is pointless if we do not build upon it with reason. We cannot reason without faith, nor claim faith without engaging our reason, any more than a bird can soar with only one wing.

And notice: as St. John Paul II reminds us, neither faith nor reason are ends in themselves. Rather, they are wings to bring us to our ultimate goal: the contemplation of Truth.