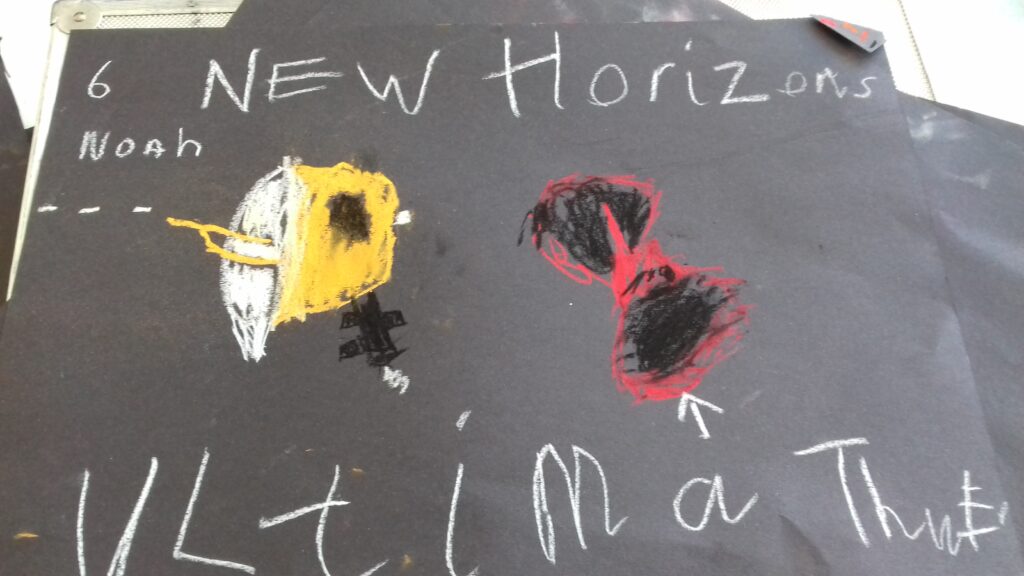 During World Space Week I was invited to do my workshop Pluto WOW !!!  for a small group of children .   I put the workshop together in order to highlight the incredible images sent back by the New Horizons Spacecraft.  This year it was impossible to resist including Ultima Thule the new flyby target of New Horizons.

When I was a child there were nine planets in the solar system , that was my reality. Pluto being the farthest planet was almost a myth as there were no proper images of it for many years.  The Hubble Space Telescope wonderful  as it is only managed unclear nondescript photographs.

When New Horizons left Earth to flyby Pluto it was still a proper member of the planet family. Along that journey the status of Pluto was altered forever, when it was demoted to being merely a dwarf planet.   New Horizons continued its pioneering journey to discover what Pluto had to offer.

The images sent back by the spacecraft of this distant world are breathtaking. The ex ninth planet in our solar system offered us  more than we ever expected. New Horizons Image Gallery

When I show these images  of Pluto to children they really warm to them. They love the heart shaped plain and are always pleased to know that it is named after Clyde Tombough. That heart shaped area is always emphasised in their drawings. The story of Pluto’s discovery and  naming coupled  with the flyby images brings out an empathic interest in this tiny planet.

During this workshop I decided to continue the story and bring the wonderfully named Ultima Thule to the attention of my little audience.  Ultima Thule is a traditional name of a distant place beyond the known world. Who could resist learning a little about this Kuiper belt object, inaimatly waiting  to be visited by a spacecraft from Earth.  Ultima Thule used to be known as 2014 MU69 now we have an iconic name and other information about its status, colour and importance.

The fact that New Horizons will flyby Ultima Thule on New Year day 2019 will offer us media coverage to announce this achievement to a global audience.  It will also give us exciting insight into the formation of our solar system. In time we will have images  that will send waves of applause around our blue planet for this milestone in space exploration.

I love the precision timing of flybys and the expertise in course correction to enable preciseness at such distances. All this as New Horizons is moving at a speed of one million kilometres per day.

In the workshop , I admire the children’s efforts to give it the black/ red colour it is deemed to have.  Some children included New Horizons in their drawings along with the Ultima Thule name. Since then some of these children have  attended other workshops and are still talking about Ultima Thule. I told them that most likely they are the only children in the world that have learnt about and drawn this object beyond the farthest frontiers.  New Years day 2019 is most definitely one to watch.

Many thanks once again for the venue, to Books at One in Louisburgh Co Mayo.

A side-show of Ultima Thule and Pluto drawings