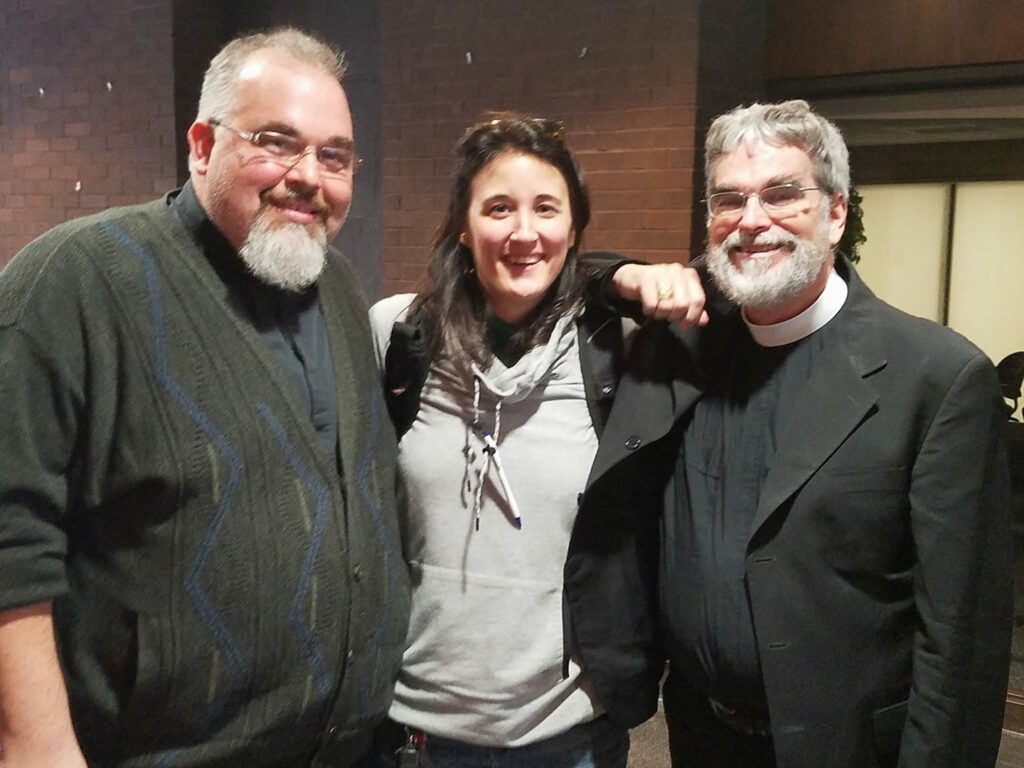 Br. Guy and Danelle Bjornson from the Diocese of La Crosse with yours truly.

Last Friday, the Diocese of La Crosse was blessed with an all-day inservice with Br. Guy. The day was primarily meant for our Catholic School teachers, but the gathering of over 150 also included diocesan clergy and interested lay people. While listening to Br. Guy’s presentations, my takeaway was of the importance of understanding the interpretive frame that many bring to questions of faith and science. After understanding and establishing a healthy framework, then an honest dialogue of truth can commence.

The point of the presentation was that the challenge of good media is to provide as broad and objective of a presentation as possible within the narrow confines of a frame that often needs to be presented in less than two minutes. Therefore, the difference between a good story and bad story about the Church is not only about the facts and falsehoods, but whether or not the interpretive frame presents a true interpretation of the facts.

I saw a connection between the Cardinal’s lecture and Br. Guy’s presentation about the presuppositions that many bring to questions of faith and science. For example, a person who wishes to argue the world was created in six, twenty-four hour days is not only making a presumption about the interpretation of Genesis, but is “waving a flag” to demonstrate what cultural worldview they represent when approaching Scripture. This cultural worldview, or interpretive frame, reveals the narrative from which people approach questions of faith and science. The same application can be done with a hard atheist who “waves the flag” of a materialist worldview, embracing the interpretive frame that there is nothing beyond the tangible world. Therefore, presumptions about questions of faith and science are not only statements of what we believe, but what “camp” we belong to that shapes our interpretive lens. 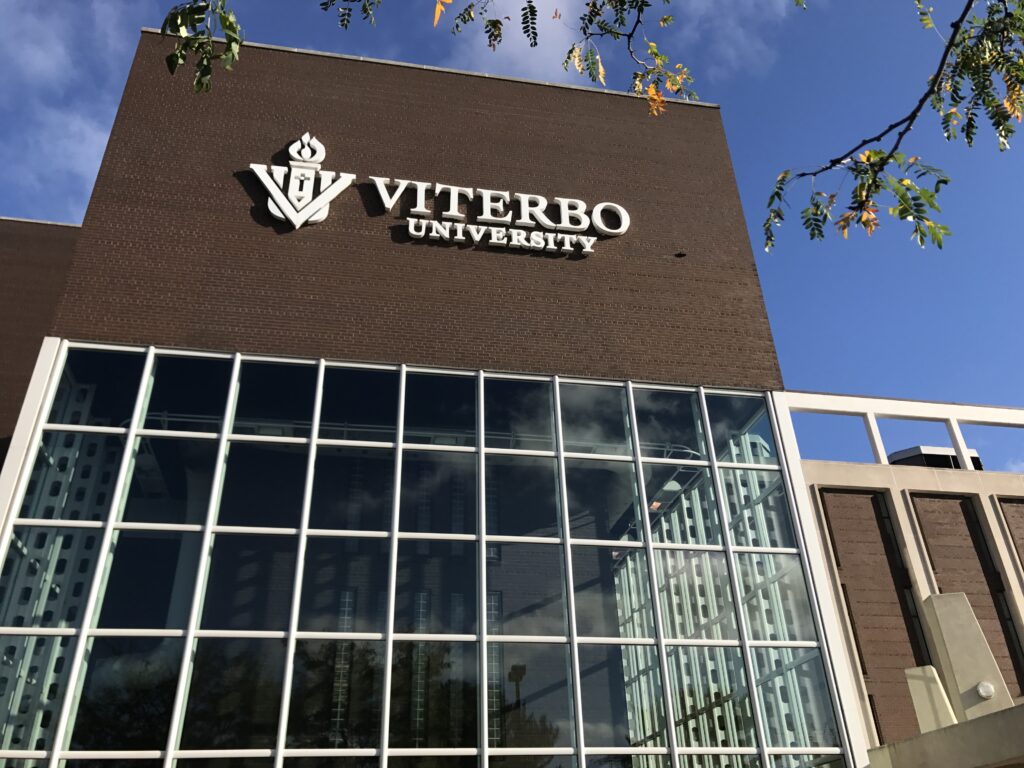 Viterbo University in La Crosse, Wisconsin. Host for the faith and science inservice.

Recently, I had a fascinating e-mail correspondence with someone about American apathy about climate change. The person I was corresponding with shared that one of the big problems when addressing any hot button social issue from abortion to climate change is that we have relegated them to “clubs.” When one forms a club, there is a presumption that those who join are all likeminded on whatever the club believes. Outside of the club, the closed nature of the group implicitly allows for social disengagement under the interpretive frame of, “that’s where all of ‘them’ go to express their beliefs.” The danger is that the interpretive frame, both within the club and from an outsider perspective looking in, can become rather distorted without healthy engagement. The reason for this is that the lack of healthy engagement outside of the club can create false presumptions about truth that are never challenged. So deep can these presumptions become that they are embraced as truth with no real challenge to their validity. 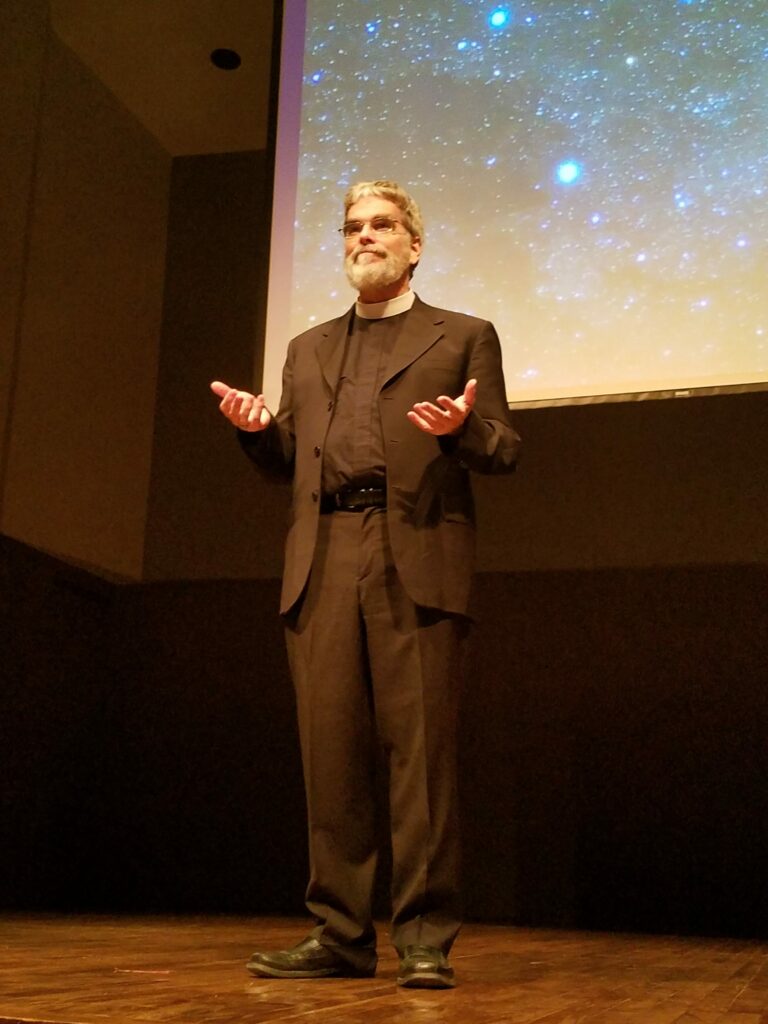 There is more that I could say about the presentation, but a question I have been wrestling with in light of this presentation is this, “How do you move a soundbite, redacted, narrative framed culture into an engagement with a Catholic faith that does not fit nicely into a soundbite and is not reducible to a narrow, interpretive frame?” Br. Guy’s starting point was to begin by understanding our biases, understand the other side’s biases, and then charitably broaden our perspective through challenging these biases.

As I let these thoughts roll around in prayer, I am reminded more and more of the “bunker mentality” culture that American society is becoming. What I see in all of these engagements is something that goes far beyond discussions about faith and science, but calls us to be a culture of charitable, honest, and peaceful engagement. The problem I see is that we are increasingly becoming an emotional, inflammatory, and verbally violent culture. This leads me to wonder: How can we move away from emotionalism and volatility to embrace a mentality of honest engagement, stepping out of the safety of our “club mentality” that ultimately does nothing more than reinforce presumptions, whether true or false?

Discussion: What do you think is the pathway out of this “club” mentality? Can we engage each other in a charitable manner that steps us out of our presumptions to explore questions of truth? And can we do this in a way that promotes charity, patience, and unity instead of polemics dug into their respective bunkers?

For another perspective on engagement, Bishop Barron recently spoke to the staff at Facebook on how to have an argument. I find his principles consistent with the spirit of Br. Guy’s presentation, promoting a culture of non-violent engagement in contrast to tribalist exclusion. Happy Monday!