Do you recall the post from a while back that focused on the research being done by Vatican Observatory scientists? This is another “Science at the V.O.” post. From the evening of Monday May 8 through the morning of Friday May 12 the V.O. hosted a conference entitled “Black Holes, Gravitational Waves, and Spacetime Singularities”. The conference was organized by Dr. Gabriele Gionti, S. J. 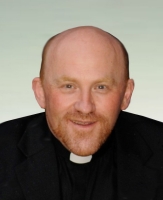 When I was visiting the V.O. in March I had the pleasure of meeting, talking with, and even hanging out at an Albano Laziale coffee shop expounding upon Kentucky community college life to, Fr. Gionti. Gionti is a native of Italy who earned his master’s and doctoral degrees in physics in the 1990’s, joined the Jesuits in 2000, was assigned to the V.O. in 2004, and ordained a priest in 2010. Since joining the Jesuits he has picked up several more degrees, in philosophy and theology. Gionti is a very educated man, but if you are imagining him as some sort of aloof genius who wanders around with his head in the clouds, well imagine instead an approachable, soft-spoken but very conversational fellow wandering through the town square in a hoodie sweatshirt.

Gionti’s conference was in part to celebrate the legacy of Fr. Georges Lemaître, the Belgian priest who, building on Albert Einstein’s Theory of General Relativity, first theorized about the idea now known as “The Big Bang”. Indeed the first talk of the conference was by the historian of science Helge Kragh, who spoke on “The scientific life of Georges Lemaître”.

The V.O.’s web page for the conference states:

The recent detection of gravitational waves has opened a new window in our understanding of the Universe, and it has also excited new speculations on the true nature of the singularities that signal the breakdown of the classical description of the spacetime at the beginning of the universe and at the endpoint of gravitational collapse. What are the current limits of modern scientific cosmology? What are the real scientific challenges that can be explored in the near future? The main goal of this workshop is to encourage interaction among the participants, between theory and observation, and to provide a stimulating and thought-provoking environment for new ideas.

That sounds like one pretty cool conference—made all the cooler by its location at the V.O. in Italy.