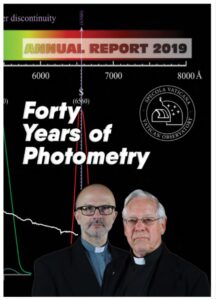 “Forty Years of Photometry.” That is what is on the cover of the Specola Vaticana/Vatican Observatory’s 2019 Annual Report. If you have not had a look at the report, click here and read through it (and to see Annual Reports going back years, click here). The two gentlemen on the cover are Fr. Richard P. Boyle, S.J. (at right) and Fr. Robert Janusz, S.J. And that cover, and those gentlemen, have a connection to my “origins story” with this Sacred Space Astronomy blog and the V.O.

The Annual Report’s main article starts off by noting that,

Just as this year the world celebrates the 50th anniversary of the Apollo moon landing, so here at the Specola we mark a significant anniversary: 40 years since the pioneering publication of Father Martin McCarthy and his collaborators on stellar photometry, which laid the groundwork for what has become a major thrust of research at the Vatican Observatory. In that paper, Fr. McCarthy described a program that has been carried out over forty years, three continents, several telescopes, and the careers of several astronomers… and is still ongoing.

The article provides a little history about the use of photometry—that is, “the measurement of light”—to learn about stars. The V.O. started doing photometry in earnest in the 1950s, and things gained momentum through Fr. McCarthy’s work. McCarthy ended up serving for several years as commission president of the International Astronomical Union’s (IAU) Commission 25 on “Stellar Photometry and Polarimetry,” and of Commission 45 on “Spectral Classification”. Meanwhile, the article reports,

The beginning of a long term photometric project at the Specola got underway with the urging of its new director, Fr. George Coyne, S.J., who had been appointed in 1978. Coyne, like McCarthy, was also a member of the IAU Commission 25. So was V. [Vytautas] Straižys from Vilnius, Lithuania.

When Coyne welcomed a new, young astronomer, Richard Boyle, S.J., to the Specola in 1981, he suggested that Boyle look into this new project. Boyle’s Ph.D. was actually in solar astronomy; but this young and energetic solar astronomer soon began to observe stars other than the sun, at night, using the Vilnius photometric system in collaboration with fellow astronomers in Rome, Vilnius, and Edinburgh….

Fr. Boyle has been doing photometric work ever since. And in the mid-2000’s his path and mine crossed (intellectually) in Vilnius. In 2004 I had read an article in Sky and Telescope magazine about Galileo’s observations of a double star, Mizar in the Big Dipper. It was immediately apparent to me that Galileo’s Mizar observation would have created problems for the heliocentric system that he supported. I became interested in the star observations made during Galileo’s time, and began research.

Eventually I wrote a paper about this research, but I was unsure of where to submit it for publication. I had never written about this kind of topic before. Who would consider a paper that included, on one hand, calculations involving “Bessel functions”, and on the other hand, Galileo’s drawing of the Trapezium in Orion? Well, a journal called Baltic Astronomy had published a paper that had been useful to me—about Galileo inadvertently observing Neptune. I had referenced the Baltic Astronomy paper in my paper. So, I decided to send my paper to Baltic Astronomy.

Baltic Astronomy was published in Vilnius, Lithuania. Its editor was an astronomer named Vytautas Straižys. After a referee’s report, Baltic Astronomy accepted the paper! I was very pleased—my first astronomy journal publication since my graduate school days. But there were certain details about the publication process that I was unsure about. I was afraid that if I kept bugging Straižys with questions I would quickly annoy this astronomer from Vilnius. So, I looked to see what authors regularly published in the journal.

The name “Richard Boyle” caught my attention. That sounded like someone I could bug with less chance of unknowingly doing something culturally clumsy. And, Boyle had a degree from St. Louis University. My father got his Ph.D. there. I lived in St. Louis once! Why, this Boyle guy was practically my second cousin twice removed. So, I contacted him for advice.

That was a good move. Boyle knew the ropes, of course. Everything worked out. “On the Accuracy of Galileo’s Observations”, by yours truly, appeared on page 443 of Volume 16, Number 3/4 (2007) of Baltic Astronomy. That was my first history of astronomy peer-reviewed publication. Boyle happened to have a paper published on page 459 of that same volume: “A Method to Correct CCD Flatfields for Precise Stellar Photometry”. Also, on page 467 was a paper by a guy named R. Janusz with a V.O. affiliation: “The Commandphot, an Organized and Automated Method for Processing CCD Stellar Observations”. Moreover, on page 451 was a paper “The STRÖMVIL Photometric System: 1996 TO 2006” by A. G. Davis Philip, whose affiliation was “Institute for Space Observations and Union College” but whose paper featured a full-color photo of the Vatican Advanced Technology Telescope (VATT). Unknowingly, I had ended up publishing in a journal that had significant ties to the Vatican Observatory.

I kept up the research, and I kept submitting papers to Baltic Astronomy. They published five papers of mine between 2007 and 2010. And most of the time, when one of my papers was published, a paper by a V.O. astronomer was published in the same volume. On page 93 of Volume 18, Number 1 (2009) is “Regarding the Potential Impact of Double Star Observations on Conceptions of the Universe of Stars in the Early 17th Century” by Henry Sipes and me. But on page 1 is “Young Stars in the Camelopardalis Dust and Molecular Clouds. V. More YSOs Confirmed Spectroscopically” by C. J. Corbally (Vatican Observatory) and V. Straižys. On page 265 of Baltic Astronomy Volume 19, Number 3/4 (2010) is my “Changes in the Cloud Belts of Jupiter, 1630-1664, as Reported in the 1665 Astronomia Reformata of Giovanni Battista Riccioli”. And on page 225 is “High Velocity Spectroscopic Binary Orbits from Photoelectric Radial Velocities: BD+20 5152, a Possible Triple System” by J. Sperauskas, A. Bartkevičius, R. P. Boyle, & V. Deveikis.

The Baltic Astronomy connection led to further contact with the V.O., and particularly with a V.O. astronomer named Guy Consolmagno. I ended up meeting Consolmagno in Chicago. Later, I invited him to come to Louisville to give a talk at our public library. When I invited him to talk at the library, he was not the Director of the V.O.—but by the time he spoke there, he was. In 2016 Br. Guy invited me to write for this blog, and in 2019 I was named a V.O. Adjunct Scholar.

I have not published in Baltic Astronomy since 2010. Around then I changed the focus of my work, from the sorts of technical analyses that I wrote for Baltic Astronomy to searching the writings of seventeenth-century astronomers for the kinds of historical works that those technical analyses said should exist, and to translating those works so others could read them. But Baltic Astronomy and the Vilnius connection is arguably why you read my posts on Sacred Space Astronomy, and why you can find my face, along with Frs. Boyle and Janusz, in the 2019 Annual Report of the Vatican Observatory that celebrates “Forty Years of Photometry”.