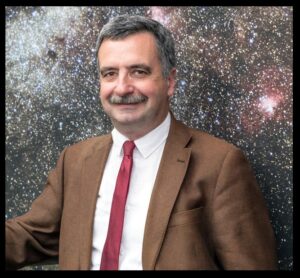 It is time for another guest post from Fernando Comerón.  Fernando is an astronomer with the European Southern Observatory.  His previous guest postings have been about using one of the world’s best telescopes at ESO in Chile (click here for that post) and about discovering the source of illumination of the North America Nebula (click here for that one) .

About this new post, he writes “it is not about professional astronomy and large telescopes, but the subject has a much closer connection with the Vatican Observatory and I thought that readers of the blog may like to read the story”.  Muchas gracias, Dr. Comerón.  ¡Que los cielos sobre Chile estén despejados siempre que observes!

This story is not about observing with large professional telescopes on remote mountaintops, but about an observation done with one of the telescopes that some of the readers of Sacred Space Astronomy, perhaps yourself, support through the Vatican Observatory Foundation.

I was honored to be appointed as faculty at the 11th Vatican Observatory Summer School (VOSS), in 2007. One of the many things that make the VOSS an unforgettable experience for everyone participating is the possibility of visiting and using some of the Observatory’s historical telescopes located on the roof of the Papal palace in Castel Gandolfo. For sure most students of the early Summer Schools remember standing inside one of the domes on some evenings, ready to watch the Moon, some planets or some globular clusters together with Fr. Emmanuel Carreira, who at the time was taking good care of, and using, those telescopes.

Nine days into VOSS’07 (which had started on the 9th of June with no less than a trip of the whole group to Rome to be received in private audience by Pope Benedict XVI), a beautiful astronomical event was going to take place: the Moon would pass in front of Venus, hiding it from view for a little over one hour. Having learned about it shortly in advance, I was prepared with the inexpensive webcam that I used at home with my small amateur telescope for lunar and planetary imaging, with the purpose of adapting it to one of the venerable telescopes at the Papal palace and recording the whole duration of the event. I explained my plans to Fr. Carreira, who was well aware of the upcoming event and was also planning to watch it, together with any VOSS students interested in joining him. Fr. Carreira suggested me to use the Zeiss double astrograph, which was the main telescope at the Observatory when it moved from Rome to Castelgandolfo in the 1930s. As it turns out, the double astrograph is equipped with a guiding telescope where my camera could be easily attached, using the massive mount of the telescope to provide reliable tracking of the Moon and Venus as they moved across the sky. 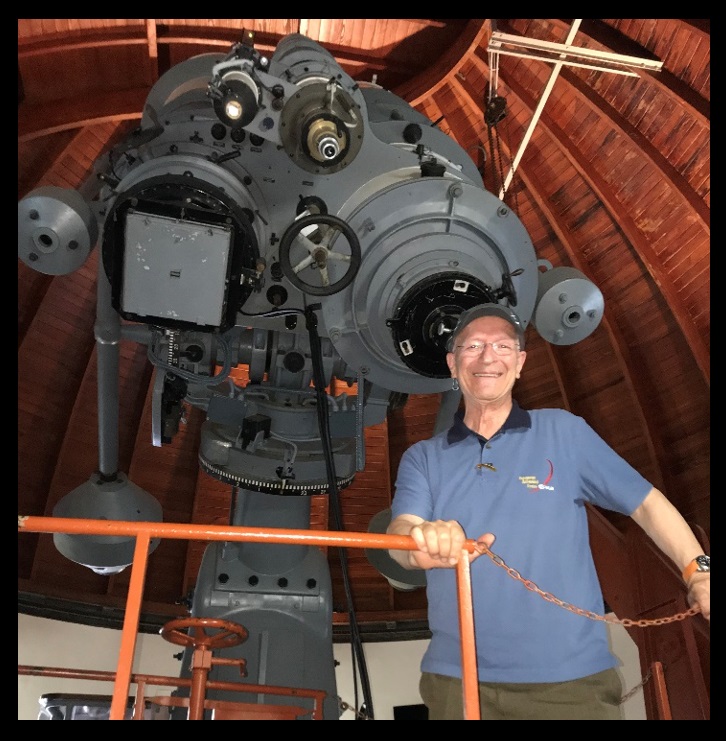 The Zeiss double astrograph seen here has been at the roof of the Papal palace of Castelgandolfo for more than eight decades. The gentleman standing in front of it is Swiss astronaut Claude Nicollier, who visited the Vatican Observatory Summer School in 2018. Mr. Nicollier has been at the same distance of another, much more famous telescope: he participated in two servicing missions to the Hubble Space Telescope, one of which included his spacewalk to install new equipment in it.

The occultation was predicted to take place on the 18th June starting at 16:38 local time. This was in the middle of the summer afternoon in full daylight. It was a pleasant, hot afternoon in the hills around Lake Albano, where Castel Gandolfo is located, with the sun shining bright in a cloudless sky. The lunar thin crescent, just four days after New Moon, was clearly seen, and next to it a very bright dot, planet Venus, slowly getting closer to the dark side of the Moon. It is always surprising to notice how easily Venus can be seen in full daylight, once you know where to look for it!

After Fr. Carreira helped me to set up the telescope, I attached my webcam to it, connected the webcam to my laptop computer, and made sure that everything was ready, with Venus centered in the field of view of the camera. Fr. Carreira went to another telescope to watch the occultation through the eyepiece. Not many students were around, which is normal when you take into account that any activity planned during the Summer School in the afternoon has to face fierce competition with the temptation of spending the time on the shores of the lake below. I patiently waited, while the telescope tracked Venus, until a few minutes before the due time for the occultation, and then I started recording with the webcam.

At 16:38, exactly as predicted, the bright crescent of Venus began to disappear as the dark edge of the lunar disk moved in front of it. It took 80 seconds for Venus to be fully hidden behind the Moon, where it would spend the next hour as the Moon followed its path in front of it. During this time I left the camera recording, trusting that the reliable mechanics of the mount of the telescope would keep tracking the motion of Venus across the sky, even when it could not be seen. 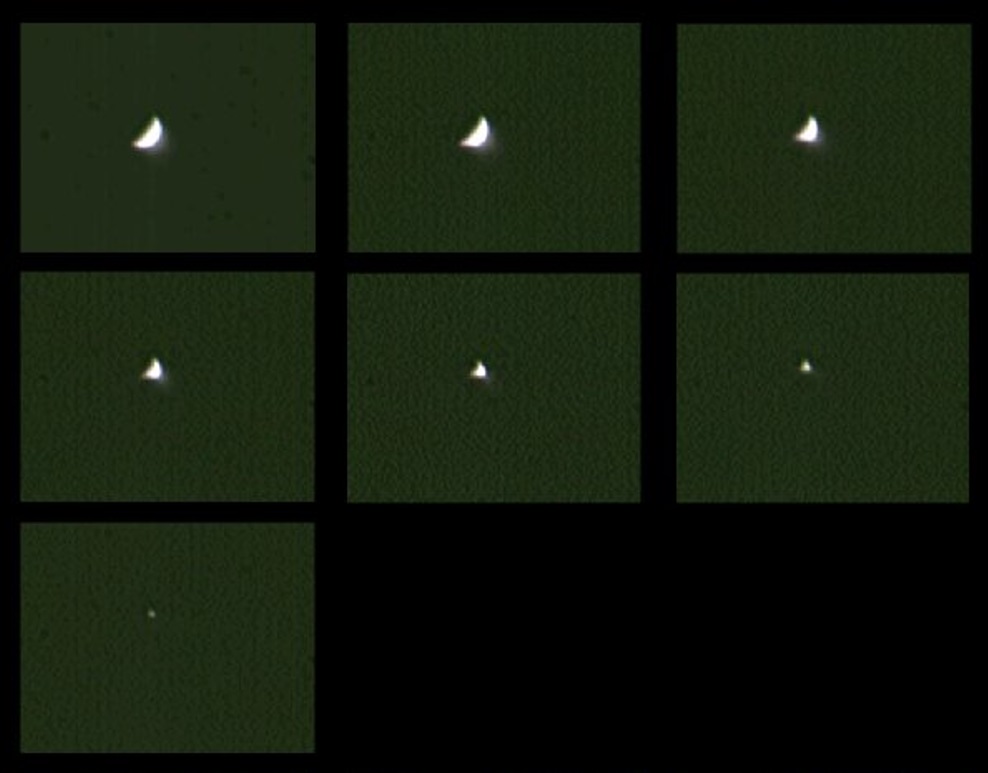 This is a composite of frames extracted from my webcam recording of the occultation of Venus by the Moon, obtained through the guiding telescope of the Zeiss double astrograph at the Papal palace of Castelgandolfo. From top to bottom and left to right, these seven images show the progressive disappearance of Venus behind the unilluminated part of the lunar disk.

And indeed, 65 minutes later, precisely on schedule, a bright dot suddenly appeared, this time projected against the edge of the lunar disk illuminated by the Sun. In the next seconds the dot turned into a crescent, and half a minute later Venus was fully uncovered, the disk of the Moon having moved past it. 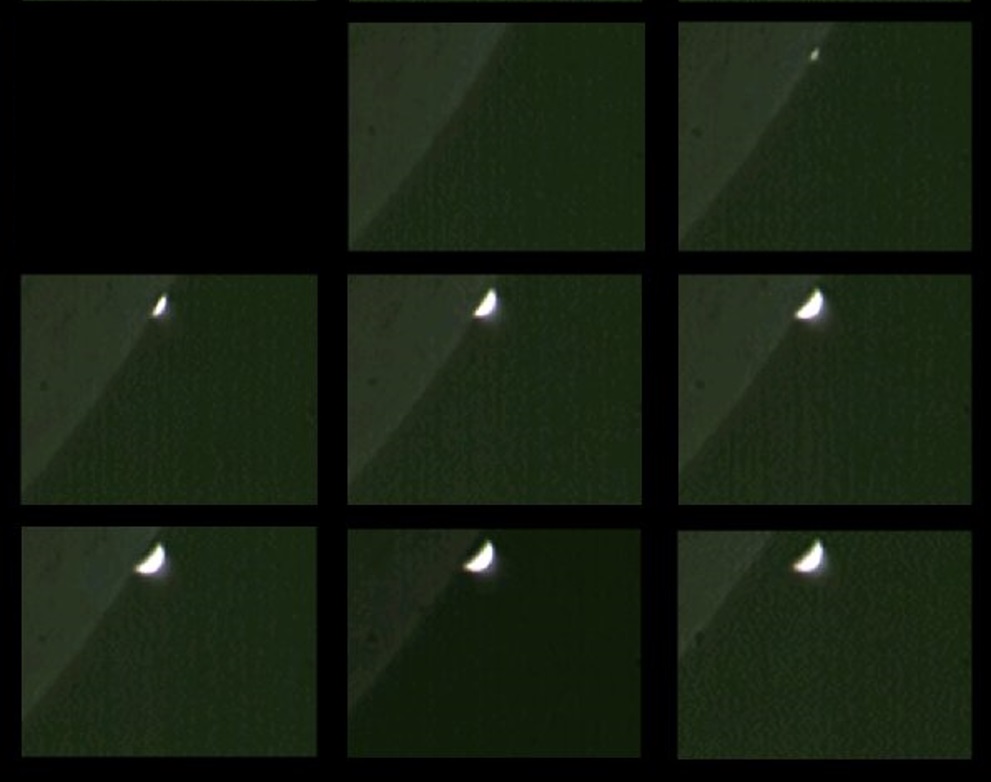 These seven show the reappearance of Venus from behind the illuminated lunar crescent. The globe of Venus, which is surrounded by highly reflecting clouds, is much brighter than the dusty surface of the Moon, which reflects much less of the incident light of the Sun and therefore appears much darker.

Astronomers do not always use telescopes for scientific research, and sometimes we take pleasure in using them just for the beauty of the things being observed. On that hot afternoon of the summer of 2007, the natural beauty of the view of the hills around Lake Albano seen from the roof of the Papal palace was enhanced, in a uniquely inspirational way, as Venus and the Moon briefly met and danced in the bright sky above.