A truly beautiful conjunction of the planet Venus and the star cluster know n as The Pleiades occurred on the evenings of April 3rd and 4th. This was a line of sight phenomenon because Venus and the Pleiades are many light years away from each other. To the eye, it looked like the planet had joined the cluster but it was a temporary visit. The star cluster is also known as the seven sisters and Messier 45 or M45. Mixed weather on April 3rd was not very inviting however I tried for a sketch (see below). I managed one partial sketch that evening.

In my efforts of the 3rd and 4th, I noticed that M45 had many more stars than seven. Venus to the naked eye was sparkling but viewed in my wide eyepiece,  it was just a bigger off white blob among the stars. On April 3rd the planet was low in the western sky, therefore it appeared to have a slight yellow tint.

My sketch from April 3rd rotated- Venus/M45 conjunction 00:52 UT / 23:52 local time. 200 mm dob/FL 1.200mm Magnification 37X The drawing is smudged here and there because it was done in light spitty rain. Earlier for a brief time, I had a good view the beautiful Venus M45 conjunction  in my 10X50 binoculars. In ambition, I dragged out the dob and  started the sketch. I could see more stars than I captured however the rain stopped play. Stayed up till I knew Venus was set because at that time the sky became 60% clear. Of course, the western horizon to the left of Clare Island stayed in the cloud so that ended my ambition of finishing the sketch. White gel pen on black pastel. I had several circles prepared in advance for C/2019 Y4 (ATLAS) they came in handy. 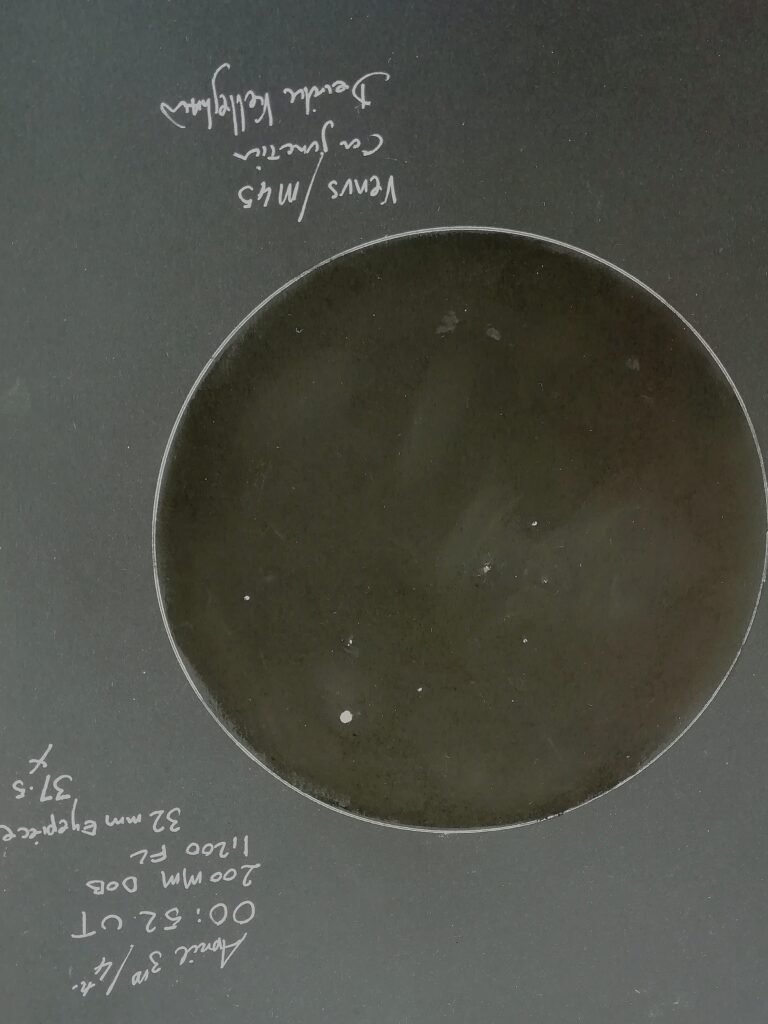 April 4th Venus/M45 conjunction 22:50 local time 23:50 UT – 200mm dob/1.200 FL/32mm eyepiece/ 37X – Just about fitted in my pre-drawn circle. Venus had moved along a lot since my first sketch. A clearer sky but very windy, my drawing gel pens went all over the deck. Lucky they did not fall between the boards 🙂 Sketch rotated 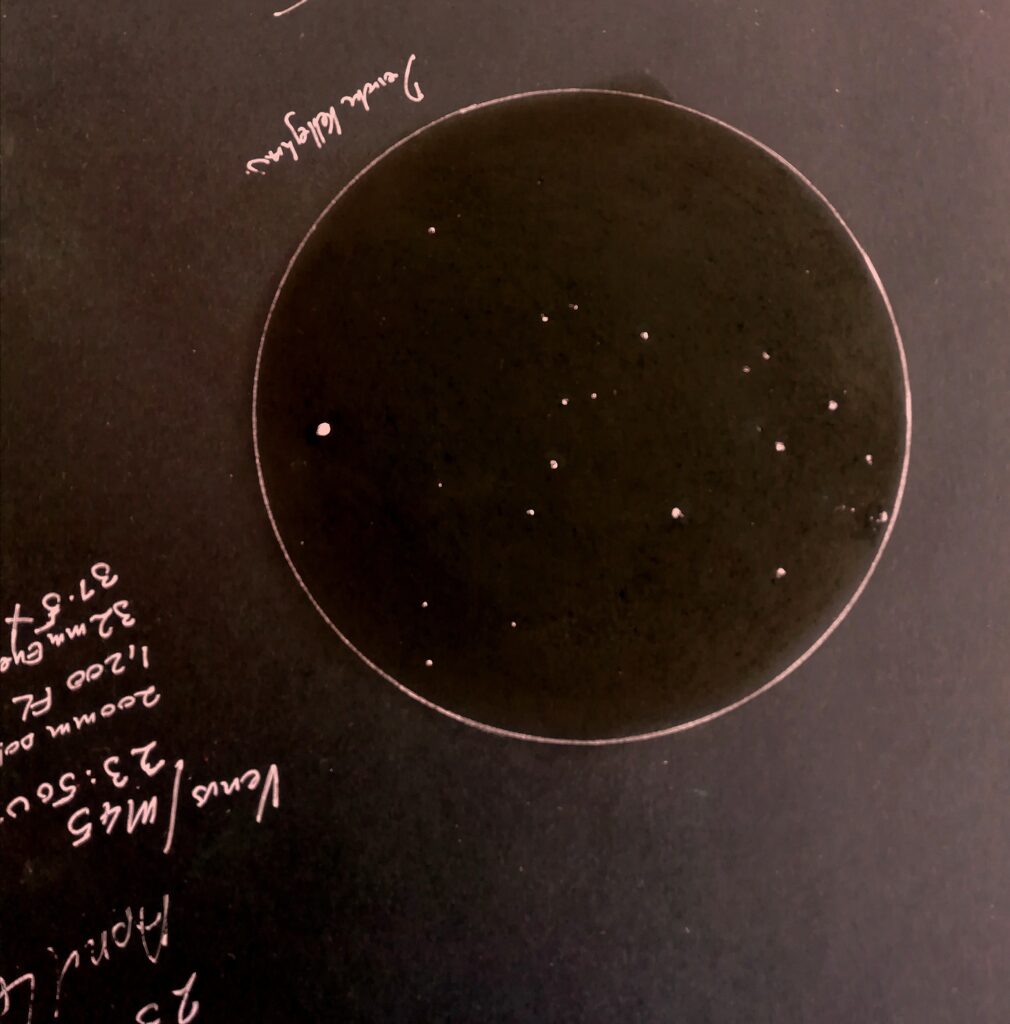 I never usually bother with Venus but as I had a different telescope out I had a look. Meade LX90 200mm/ 2000 mm Focal Length /8mm eyepiece / 250X / 23:25 UT.  The planet had an obvious phase, it looked small in my view, therefore I drew it bigger than I could see it. To my eye, it looked about 6mm diameter within my field of view, therefore I drew it at 3cm diameter. Before I started it I tried several filters. In a deep yellow filter, I thought I saw some altered contrast on the sunlit quarter. However, I wasn’t sure if it was real or not so I did not include it.

The phase was very clear via the 8mm eyepiece.  I became aware of some subtle contrast changes and a darkening  near the terminator.  I started my sketch in yellow as I was looking at Venus via the deep yellow filter. However, I thought it looked ridiculous in colour. Minus the filter Venus  had a slight grey / blue appearance with some glare.When I reverted to a non-filtered view I  was happy to settle my eye into the small detail available.  The phase and the shape of the terminator. The view of M45 with Venus minus the telescope  was still very beautiful. It woud have made a nice a naked eye drawing.

Next time Venus and M45 hang out together will be in 2028 !!!! Sketch below in pastel on black paper 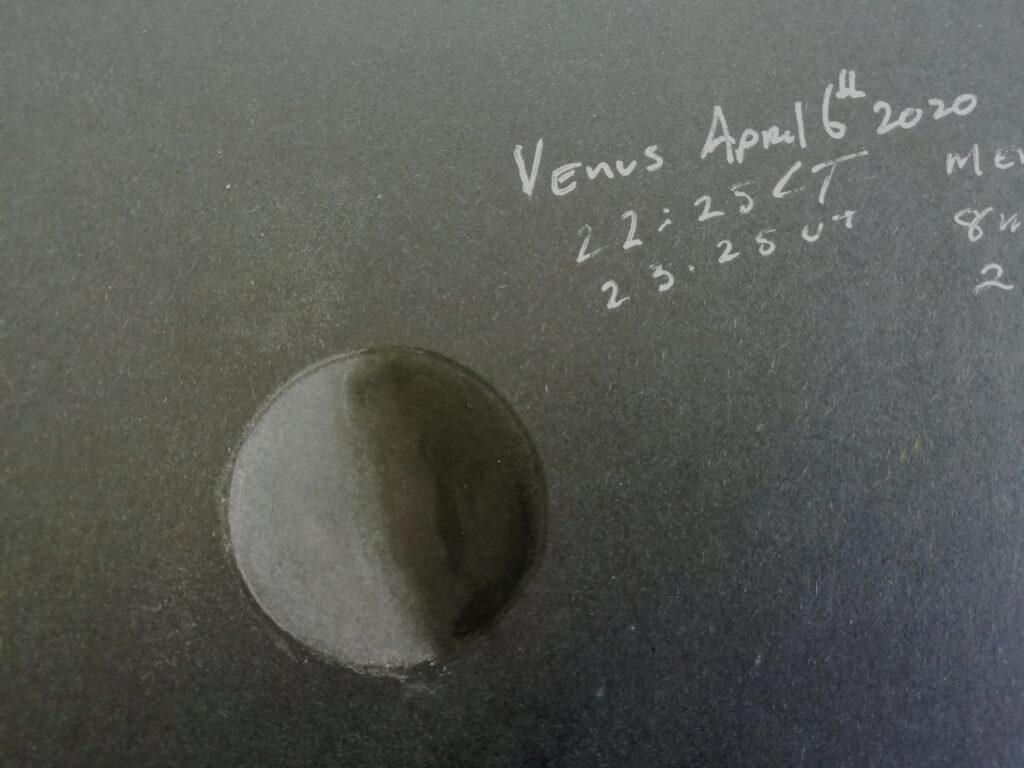