NASA is exploring our solar system and beyond to understand the workings of the universe, searching for water and life among the stars. Image credit: NASA

As NASA missions explore our solar system and search for new worlds, they are finding water in surprising places. Water is but one piece of our search for habitable planets and life beyond Earth, yet it links many seemingly unrelated worlds in surprising ways.

“NASA science activities have provided a wave of amazing findings related to water in recent years that inspire us to continue investigating our origins and the fascinating possibilities for other worlds, and life, in the universe,” said Ellen Stofan, chief scientist for the agency. “In our lifetime, we may very well finally answer whether we are alone in the solar system and beyond.”

The chemical elements in water, hydrogen and oxygen, are some of the most abundant elements in the universe. Astronomers see the signature of water in giant molecular clouds between the stars, in disks of material that represent newborn planetary systems, and in the atmospheres of giant planets orbiting other stars.

There are several worlds thought to possess liquid water beneath their surfaces, and many more that have water in the form of ice or vapor. Water is found in primitive bodies like comets and asteroids, and dwarf planets like Ceres. The atmospheres and interiors of the four giant planets — Jupiter, Saturn, Uranus and Neptune — are thought to contain enormous quantities of the wet stuff, and their moons and rings have substantial water ice.

This diagram illustrates the possible interior of Saturn’s moon Enceladus based on a gravity investigation by NASA’s Cassini spacecraft and NASA’s Deep Space Network, reported in April 2014. Credit: NASA/JPL-Caltech

Perhaps the most surprising water worlds are the five icy moons of Jupiter and Saturn that show strong evidence of oceans beneath their surfaces: Ganymede, Europa and Callisto at Jupiter, and Enceladus and Titan at Saturn.

Europa and Enceladus are thought to have an ocean of liquid water beneath their surface in contact with mineral-rich rock, and may have the three ingredients needed for life as we know it: liquid water, essential chemical elements for biological processes, and sources of energy that could be used by living things. NASA’s Cassini mission has revealed Enceladus as an active world of icy geysers. Recent research suggests it may have hydrothermal activity on its ocean floor, an environment potentially suitable for living organisms.

NASA spacecraft have also found signs of water in permanently shadowed craters on Mercury and our moon, which hold a record of icy impacts across the ages like cryogenic keepsakes.

While our solar system may seem drenched in some places, others seem to have lost large amounts of water. 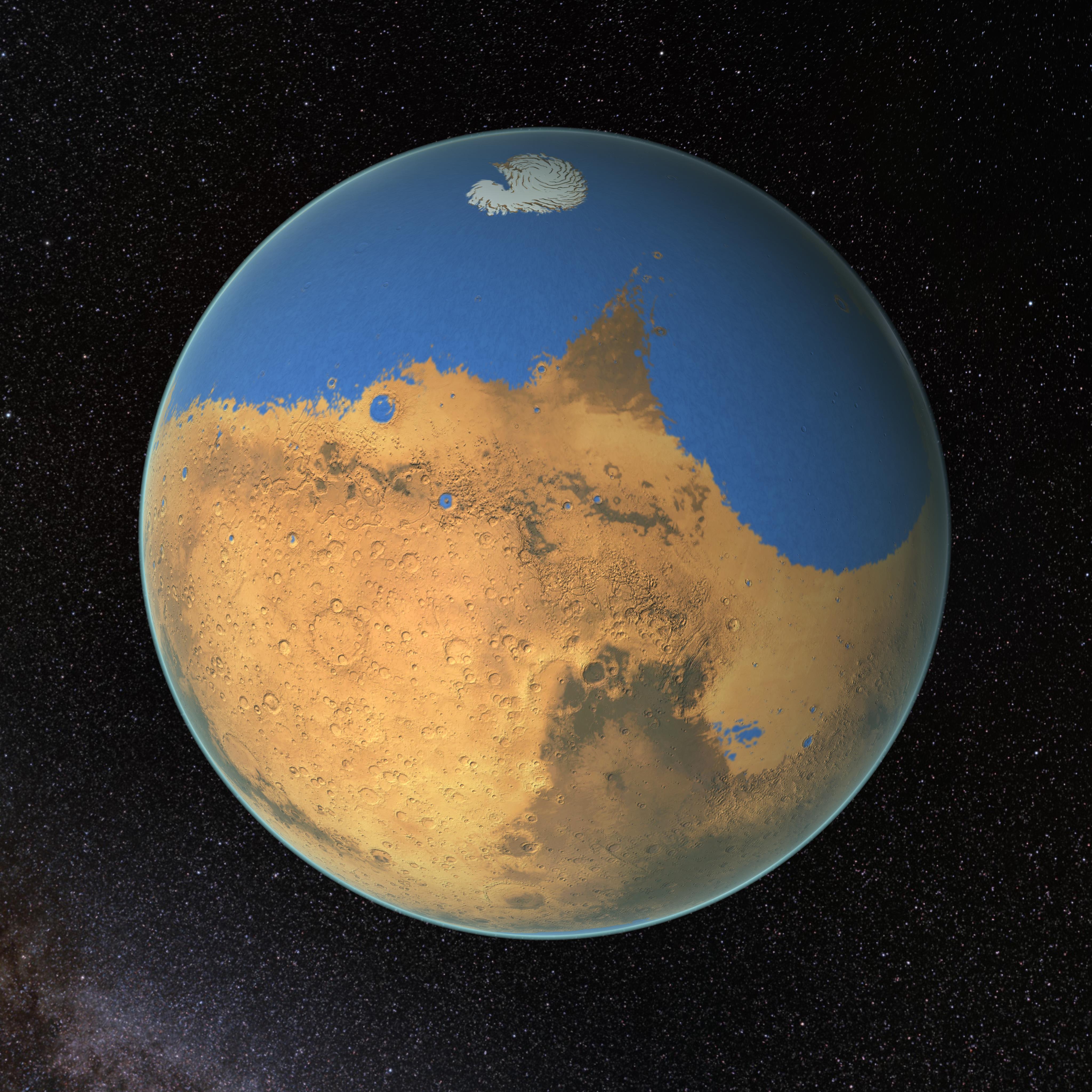 NASA scientists have determined that a primitive ocean on Mars held more water than Earth’s Arctic Ocean and that the Red Planet has lost 87 percent of that water to space. Image Credit: NASA’s Goddard Space Flight Center

On Mars, NASA spacecraft have found clear evidence that the Red Planet had water on its surface for long periods in the distant past. NASA’s Curiosity Mars Rover discovered an ancient streambed that existed amidst conditions favorable for life as we know it.

More recently, NASA scientists using ground-based telescopes were able to estimate the amount of water Mars has lost over the eons. They concluded the planet once had enough liquid water to form an ocean occupying almost half of Mars’ northern hemisphere, in some regions reaching depths greater than a mile (1.6 kilometers). But where did the water go?

It’s clear some of it is in the Martian polar ice caps and below the surface. We also think much of Mars’ early atmosphere was stripped away by the wind of charged particles that streams from the sun, causing the planet to dry out. NASA’s MAVEN mission is hard at work following this lead from its orbit around Mars.

The story of how Mars dried out is intimately connected to how the Red Planet’s atmosphere interacts with the solar wind. Data from the agency’s solar missions — including STEREO, Solar Dynamics Observatory and the planned Solar Probe Plus — are vital to helping us better understand what happened.

Understanding the distribution of water in our solar system tells us a great deal about how the planets, moons, comets and other bodies formed 4.5 billion years ago from the disk of gas and dust that surrounded our sun. The space closer to the sun was hotter and drier than the space farther from the sun, which was cold enough for water to condense. The dividing line, called the “frost line,” sat around Jupiter’s present-day orbit. Even today, this is the approximate distance from the sun at which the ice on most comets begins to melt and become “active.” Their brilliant spray releases water ice, vapor, dust and other chemicals, which are thought to form the bedrock of most worlds of the frigid outer solar system.

Scientists think it was too hot in the solar system’s early days for water to condense into liquid or ice on the inner planets, so it had to be delivered — possibly by comets and water-bearing asteroids. NASA’s Dawn mission is currently studying Ceres, which is the largest body in the asteroid belt between Mars and Jupiter. Researchers think Ceres might have a water-rich composition similar to some of the bodies that brought water to the three rocky, inner planets, including Earth.

The amount of water in the giant planet Jupiter holds a critical missing piece to the puzzle of our solar system’s formation. Jupiter was likely the first planet to form, and it contains most of the material that wasn’t incorporated into the sun. The leading theories about its formation rest on the amount of water the planet soaked up. To help solve this mystery, NASA’s Juno mission will measure this important quantity beginning in mid-2016.

Looking further afield, observing other planetary systems as they form is like getting a glimpse of our own solar system’s baby pictures, and water is a big part of that story. For example, NASA’s Spitzer Space Telescope has observed signs of a hail of water-rich comets raining down on a young solar system, much like the bombardment planets in our solar system endured in their youth.

With the study of exoplanets — planets that orbit other stars — we are closer than ever to finding out if other water-rich worlds like ours exist. In fact, our basic concept of what makes planets suitable for life is closely tied to water: Every star has a habitable zone, or a range of distances around it in which temperatures are neither too hot nor too cold for liquid water to exist. NASA’s planet-hunting Kepler mission was designed with this in mind. Kepler looks for planets in the habitable zone around many types of stars.

Recently verifying its thousandth exoplanet, Kepler data confirm that the most common planet sizes are worlds just slightly larger than Earth. Astronomers think many of those worlds could be entirely covered by deep oceans. Kepler’s successor, K2, continues to watch for dips in starlight to uncover new worlds.

The agency’s upcoming TESS mission will search nearby, bright stars in the solar neighborhood for Earth- and super-Earth-sized exoplanets. Some of the planets TESS discovers may have water, and NASA’s next great space observatory, the James Webb Space Telescope, will examine the atmospheres of those special worlds in great detail.

It’s easy to forget that the story of Earth’s water, from gentle rains to raging rivers, is intimately connected to the larger story of our solar system and beyond. But our water came from somewhere — every world in our solar system got its water from the same shared source. So it’s worth considering that the next glass of water you drink could easily have been part of a comet, or an ocean moon, or a long-vanished sea on the surface of Mars. And note that the night sky may be full of exoplanets formed by similar processes to our home world, where gentle waves wash against the shores of alien seas.

Earth isn’t the only ocean world in our solar system. Oceans could exist in diverse forms on moons and dwarf planets, offering clues in the quest to discover life beyond our home planet. This illustration depicts the best-known candidates in our search for life in the solar system.

For more information about NASA’s exploration of the solar system and beyond, visit: http://www.nasa.gov