There is an idea that floats around that says we used to think the universe was small—and then following Copernicus and the development of modern science we found out that it was large and the Earth was just a speck within it and we were tiny.  You will find this idea in all sorts of places, from works on the history of science—

The [Copernican] revolution saw a historical progression from belief in a small universe with humankind at its center to a larger, and eventually infinite, universe with Earth not in the center.

Only 500 years ago, the universe seemed simple, orderly, peaceful, and well-understood. The Earth stood motionless at the center. The Sun, Moon, and planets circled it at no great distance. Slightly further away, the fixed stars were tiny points of light mounted on a sphere of pure crystal. It was a small, comfortable, and reassuring universe, and Man was at the center of everything.

The Greek, and later medieval Christian, model of the universe had described a small and intimate place populated with heavenly bodies.

—to the writings of Carl Sagan—

Once we overcome our fear of being tiny, we find ourselves on the threshold of a vast and awesome Universe that utterly dwarfs—in time, in space, and in potential—the tidy anthropocentric proscenium of our ancestors.

But this idea is wrong.  Two thousand years ago, in chapter six of the first book of his Almagest, Ptolemy wrote that the Earth was so small in comparison to the size of the universe as to be but a point:

Now, that the earth has sensibly the ratio of a point to its distance from the sphere of the so-called fixed stars gets great support from the fact that in all parts of the earth the sizes and angular distances of the stars at the same times appear everywhere equal and alike, for the observations of the same stars in the different latitudes are not found to differ in the least. 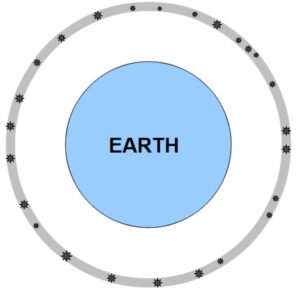 The Earth, surrounded by the sphere of fixed stars. 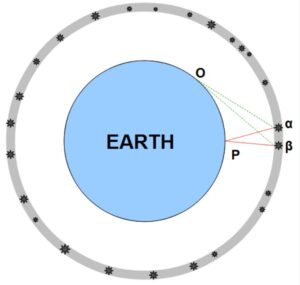 Two stars, α and β, are observed by astronomers at points O and P on Earth’s surface. 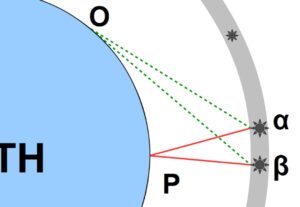 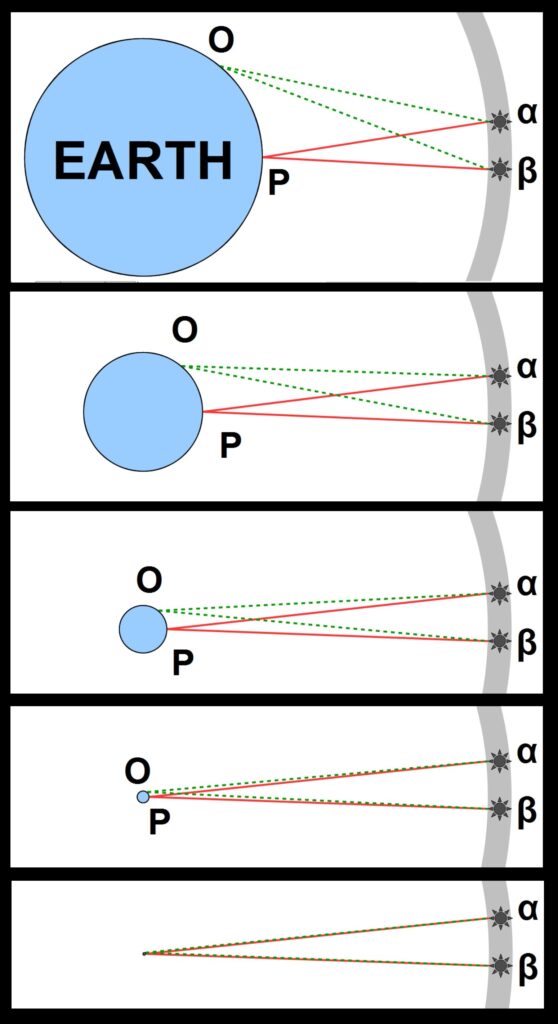 The smaller Earth is compared to the sphere of the stars, the less difference there is between what the astronomer at P sees and what the astronomer at O sees. If Earth is a mere point compared to the distance to the stars, then P and O see exactly the same thing. Ptolemy notes that P and O in fact do see exactly the same thing—“observations of the same stars in the different latitudes are not found to differ in the least”—so therefore the Earth is indeed a mere point in comparison to the universe of stars.

In fact it is actually completely obvious that Earth is like a point in comparison to the distance to the stars—you can easily verify this for yourself.  Just go outside and watch the sky.  The key is to observe constellations on the celestial equator, which divides into halves the sphere of the stars as seen from Earth.  Orion’s belt is on the celestial equator, so suppose you go out during early April, when Orion is just setting at midnight.  You now note what is rising opposite Orion—Ophiuchus.

Then six months later, in early October, you go out when Orion is just rising at midnight.  And what is setting opposite Orion?  Ophiucus again. 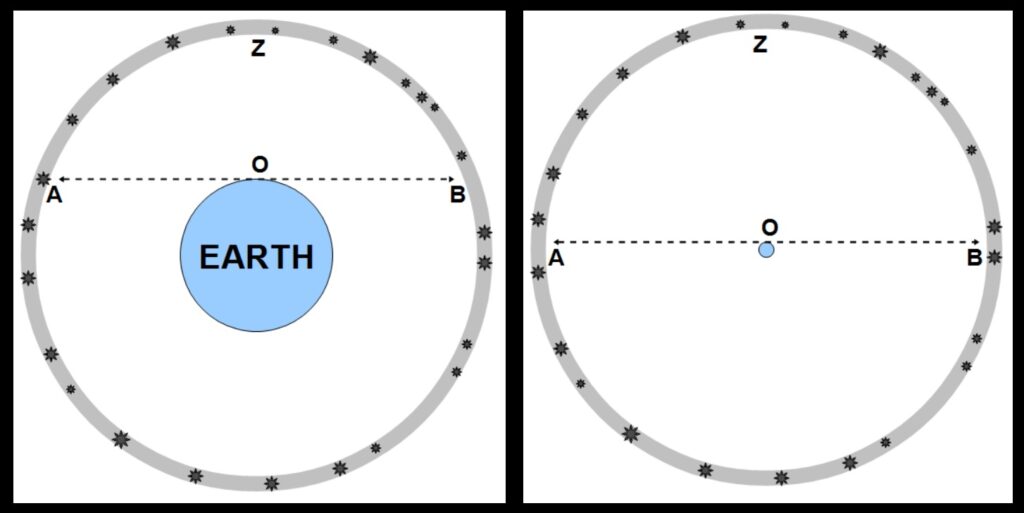 An observer at O on Earth sees that portion of the celestial sphere of stars which is located above his or her horizon (assuming the horizon, represented here by the dotted line, is clear): The observer sees stars from one horizon A, across the zenith Z, to the other horizon B. In the left-hand figure, the Earth is of significant size compared to the sphere of stars, and A-Z-B encompasses less than half of that sphere. In the right-hand figure, the Earth is much smaller, and A-Z-B encompasses nearly half. In the case where Earth is truly of negligible size, or a point, compared to the sphere of stars, then the observer at O sees exactly half the celestial sphere. Make measurements as precisely as you like—you will find that exactly half the celestial sphere is seen from Earth.

So long as we humans have understood some basic things about geometry, and so long as we have made basic observations of the sky, we have known that Earth is insignificant in comparison to the rest of the universe.  “As high as the heavens are above the Earth” has always been incomprehensibly high.  There was never a time when anyone who looked at the night sky could believe in a universe that was small, comfortable, reassuring, intimate, and tidy.  We have always known that we are tiny.