This is a re-run of a post that I originally wrote for October 5, 2016.
I think it goes well with the posts on the expanding universe from two weeks ago and last week. 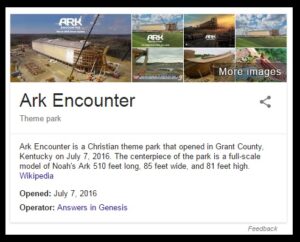 What Google returns when searching on the Kentucky Ark.

Last week [in 2016], in a post about discussing theories like the Big Bang theory with those who hold traditional views of the age of the universe (such as the folks who built the Kentucky Ark), I mentioned how Arthur Eddington and Edwin Hubble expressed opposition to the idea of a finite age to the universe, and how the name “Big Bang” was a derisive joke-name given to it by Fred Hoyle.

Guess who else disliked the Big Bang Theory?  Soviet scientists.  Yes, in 1949 Soviet astronomers pledged to fight against the theory of the “widening of the Universe” and declared that, in order to counterbalance this pro-religious “bourgeois” idea

…Soviet science must intensify its work on regions beyond our galaxy, to give a materialistic explanation of the red displacement in the spectra of galaxies.*

And, during the same time period, members of the Soviet establishment made statements such as

Today’s bourgeois science supplies the church and fideism with new arguments… [which] assert that the world is finite, that it is limited in time and space….  The theory [“broadly known in capitalist countries as the expanding Universe theory”] was offered in the late 1920s by the Belgian priest Georges Lemaitre, and it is underlain by the phenomenon called in astronomy the “red shift.”  The reactionary scientists Lemaitre… and others made use of the “red shift” in order to strengthen religious views on the structure of the Universe….  Falsifiers of science want to revive the fairy tale of the origin of the world from nothing.** 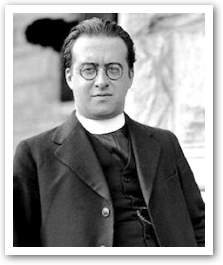 And then there was

The general scientific crisis in America and Western Europe is reflected in astronomy also.  As a result, cosmogony, the branch of astronomy concerned with questions of the development of celestial bodies, has been turned into a repository for all kinds of idealistic nonsense and absurd fabrications which in the last analysis aim at restoring the legend of the world’s creation.+

One of the great ironies of the Big Bang theory is that opposition to it has come from such widely divergent groups as “godless Soviet” scientists and the folks who brought us the Kentucky Ark.++

+From “Greetings to Winners of Stalin Prizes,” Pravda (March 5, 1951), pg. 4.  The quote is from V. Ambartsumyan, who was a Stalin Prize winner and President of the Armenian Academy of Sciences.

++I learned about Soviet opposition to the Big Bang theory from the talk “The Relations between Dutch Radio Astronomers and Their Soviet Colleagues during the Heyday of the Cold War,” by Astrid Elbers of Leiden Observatory, at the Tenth Biennial History of Astronomy Workshop, July 6-10, 2011, at the University of Notre Dame.  Elbers’s work was published in 2012 under the title “De relaties tussen Nederlandse astronomen en hun Sovjetcollega’s tijdens de Koude Oorlog.” The published version contains other interesting quotations related to this topic.