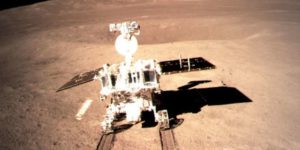 You can add to this list festivals in China and Korea!

Some of this Blog is taken from an activity that Nancy and I developed many years ago for our teacher professional development workshop, Project ARTIST (Astronomy-Related Teacher In-Service Training), that Nancy mentioned in her last Blog, “When I Heard the Learn’d Astronomer.” The activity is called Magpies and the Milky Way. The following information about the Tanabata Festival comes from a Japanese travel guide.

Tanabata, also known as the “star festival,” takes place on the 7th day of the 7th month of the year, when, according to a Chinese legend, the two stars Altair and Vega, which are usually[sic] separated from each other by the Milky Way, are able to meet….

One popular Tanabata custom is to write one’s wishes on a piece of paper and hang that piece of paper on a specially erected bamboo tree, in the hope that the wishes come true.

Colorful Tanabata festivals are held across Japan in early July and August. Among the biggest and most famous ones are the Tanabata Festivals in Sendai in August and Hiratsuka near Tokyo in July.

It should be noted here that the number 7 has significance in many cultures—seven days of the week, seven planets (before the telescope when the Sun and the Moon were planets, but the Earth was not), seven archangels, seven deadly sins, etc.

The festival was brought to Japan by the Empress Kōken in 755. It originated from “The Festival to Plead for Skills,” otherwise known as the Qixi Festival (qi=seven and xi=night). The festival is also celebrated in Korea where it is called Chilseok. In China the myth relating to this festival (discussed below) dates back more than 2,600 years!

Story Summary by Nancy Lebofsky
Long ago there was a beautiful princess, the daughter of the Sky God. She was the most skillful weaver in the land, weaving beautiful cloth at her loom every day. One day she looked up from her loom and saw a herdsman at work. She fell in love with him at once. When the herdsman saw the princess at her window, he also fell in love.

The Weaving Princess begged her father to allow her to marry the poor herdsman. The Sky God agreed, and the two were very happy together. They were so happy that they each neglected their work. The princess forgot to weave her beautiful cloth, and the herdsman neglected his animals. The Sky God decided to punish them.

The Sky God placed the princess in the sky in one place, and the herdsman in the sky in another place. She was called Orihime Boshi (Weaving Princess Star) and he was called Hiko Boshi (Puller of Cow Star). Between them the Sky God put a river of stars. They could see each other but could not cross the river. The princess and herdsman returned to their work with great sadness.

Other versions of this story are found in Tom Birdseye’s A Song of Stars (1990) and Jeanne Lee’s Legend of the Milky Way (1982), a Reading Rainbow Book which tells the Chinese version of the legend. In China, the Weaving Princess, in one version of the story, is a fairy. The herdsman is sometimes referred to as a cowherd or just a peasant boy. 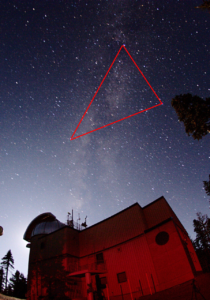 Image of the Milky Way and Summer Triangle above VATT. Photograph by Jim Scotti.

Connections to Astronomy
There are two astronomy-related connections!

The first relates to the date of the Festival. The Festival is traditionally held on the 7th day of the 7th month. However, the date is based on the Chinese lunisolar calendar and so falls in August rather than July.

The second astronomical connection is mentioned in the Travel Guide quote above. Vega, the star represented by the Weaving Princess, is a prominent star in the constellation Lyra (the harp). Altair, the star represented by the Herdsman, is a prominent star in the constellation Aquila (the eagle). In the summer these two stars can be seen separated by the Milky Way. Vega and Altair are part of an asterism—a prominent group of stars, but not one of the 88 designated constellations—called the Summer Triangle. The third star in the triangle is Deneb, located in the constellation Cygnus (the swan), or the Northern Cross (another asterism). Here is an image that shows the Milky Way and the Summer Triangle above the Vatican Advanced Technology Telescope (VATT) on Mt. Graham. I wrote about this several months ago in my last Blog. You can learn more about the Summer sky and the Summer Triangle in Bob Trembley’s Blog, In the Sky this Week.

A Chinese Lunar Mission
What inspired me to write this Blog was the ongoing Chinese mission to the far side of the Moon! The lander, China’s fourth, is called Chang’e-4 (Chang’e is the Chinese Moon goddess) and the rover is China’s second rover, Yutu-2 (Jade Rabbit, the rabbit in the Moon).

There are many “retellings” of this 2,500-years-old myth. One also finds alternate ways to spell the names in these myths. The following is based on what has been officially published by the International Astronomical Union (IAU) which oversees the naming of objects from space (meteorites) to objects in space: asteroids, moons, exoplanets, and features on the surfaces of these bodies. We call the formal naming of these objects nomenclature and nomenclature will be the subject of a future Blog.
The name of the communications satellite (the bridge between the lander and Earth) is Queqiao, which means “magpie bridge” in Chinese.

Do we see the obvious connection to the Weaving Princess and Herdsman story?

Yutu-2, is exploring within the 2,500-kilometer-wide South Pole-Aiken Basin. The rover has observed olivine and low-calcium pyroxene which could be material excavated from the Moon’s mantle by a nearby impact.

Hunting for Saffordites East of Mt. Graham and the Vatican Telescope. pt. 2