I want to let you in on a little secret. It’s a secret that, for those who are Christians that observe Advent, was reflected upon this past weekend. It’s a secret that was shared between Mary and Elizebeth from the Gospel of Luke. As Scripture shares with us, Mary went in haste to see her cousin Elizabeth since the angel announced to Mary that both she and her cousin were pregnant. Is the secret I speak of about two women who just found out they are expecting a baby? Don’t get me wrong, I have had a taste of that excitement as former students of mine have called me in the past to share with me that they are expecting a child and ask me to do two things: The Baptism after they are born and not to tell anyone – especially their parents. However, that isn’t the secret I speak of.

So, then, what is this great “secret” that I’m trying to tantalize you with? The answer that would have been plainly understood by both Mary and Elizabeth is hidden in the song Mary sings to Elizabeth after Elizabeth tells Mary that she is humbled to be in the presence of Jesus’ mother.

“My soul proclaims the greatness of the Lord;
my spirit rejoices in God my savior.
For he has looked upon his handmaid’s lowliness;
behold, from now on will all ages call me blessed.
The Mighty One has done great things for me,
and holy is his name.

His mercy is from age to age
to those who fear him.
He has shown might with his arm,
dispersed the arrogant of mind and heart.
He has thrown down the rulers from their thrones
but lifted up the lowly.

The hungry he has filled with good things;
the rich he has sent away empty.
He has helped Israel his servant,
remembering his mercy,
according to his promise to our fathers,
to Abraham and to his descendants forever. (Luke 1:46-55)

Some often think of this song to be an extemporaneous, charismatic prayer by Mary. It wasn’t. Similar to when you drive to work and that one song comes on that speaks deeply to who you are, Mary was singing a song that would have been know to any of the Children of Israel at that time: The Song of Hannah that was sung long before Mary’s praise issued from her lips, giving praise to God for the birth of her son Samuel.

My heart exults in the LORD,
my horn is exalted by my God.
I have swallowed up my enemies;
I rejoice in your victory.

There is no Holy One like the LORD;
there is no Rock like our God
Speak boastfully no longer,
Do not let arrogance issue from your mouths.
For an all-knowing God is the LORD,
a God who weighs actions.

“The bows of the mighty are broken,
while the tottering gird on strength.
The well-fed hire themselves out for bread,
while the hungry no longer have to toil.
The barren wife bears seven sons,
while the mother of many languishes.

“The LORD puts to death and gives life,
casts down to Sheol and brings up again.
The LORD makes poor and makes rich,
humbles, and also exalts.

He raises the needy from the dust;
from the ash heap lifts up the poor,
To seat them with nobles
and make a glorious throne their heritage.
“For the pillars of the earth are the LORD’s,
and he has set the world upon them.

He guards the footsteps of his faithful ones,
but the wicked shall perish in the darkness;
for not by strength does one prevail.
The LORD’s foes shall be shattered;

the Most High in heaven thunders;
the LORD judges the ends of the earth.
May he give strength to his king,
and exalt the horn of his anointed!” (1 Samuel 2:1-10)

Again, you might ask, “What is the secret these ‘songs’ sing that has got Fr. James so jazzed up?” To recast the secret in today’s language: Mary and Elizabeth knew the secret that Christmas had already come – it was in their wombs – John the Baptism in Elizabeth’s womb – Jesus in Mary’s womb. Now, similar to my former students who swear me to secrecy about the baby to come until they can announce it to their families, so, too, is this secret a hidden one. Mary and Elizabeth were the only two, save Joseph and Zachariah, who would have fully grasped the power of this moment. Nevertheless, we have the honor to sit with Mary and Elizabeth and share in their excitement of both the joy of newborn children to come and the keeping of a promise that God had made throughout all of human history after the Fall.

Again the LORD spoke to Ahaz:
Ask for a sign from the LORD, your God; let it be deep as Sheol, or high as the sky!
But Ahaz answered, “I will not ask! I will not tempt the LORD!”
Then he said: Listen, house of David! Is it not enough that you weary human beings? Must you also weary my God?
Therefore the Lord himself will give you a sign; the young woman, pregnant and about to bear a son, shall name him Emmanuel. (Isaiah 7:10-14)

During Advent, we light four candles, three purple and one rose. They symbolize both our waiting for Christ’s final return in glory and our preparation for Christmas. The history of the symbol is from the northernmost parts of Europe and the Yule season. The tradition was that the people would light candles during the time the sun would disappear in the northernmost regions, marking time until the Sun would return over the horizon again.

For Christians, this symbol is transformed to show that in a world of “darkness” that knows brokenness, we wait for Christ to break in with his “light” and “re-order” our world. Put another way, our nights that knew no stars turns to the rising Son of God, a star so bright that even night is turned to day. Our world NEEDS Christmas. Not the Christmas of how much was spent on the diamond neckless or the Christmas of whether or not the kids got all the toys they wanted. We need a Christmas to allow the love and mercy offered in Jesus Christ to turn our spiritual nights into day. On this Christmas, then, let us look to the morning star. Not a celestial object that we know well and admire, but to the risen Son – Jesus Christ. And I wish to extend to you a most Blessed Christmas and Happy New Year! 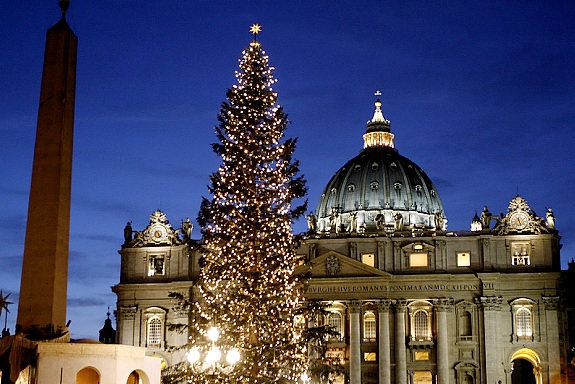