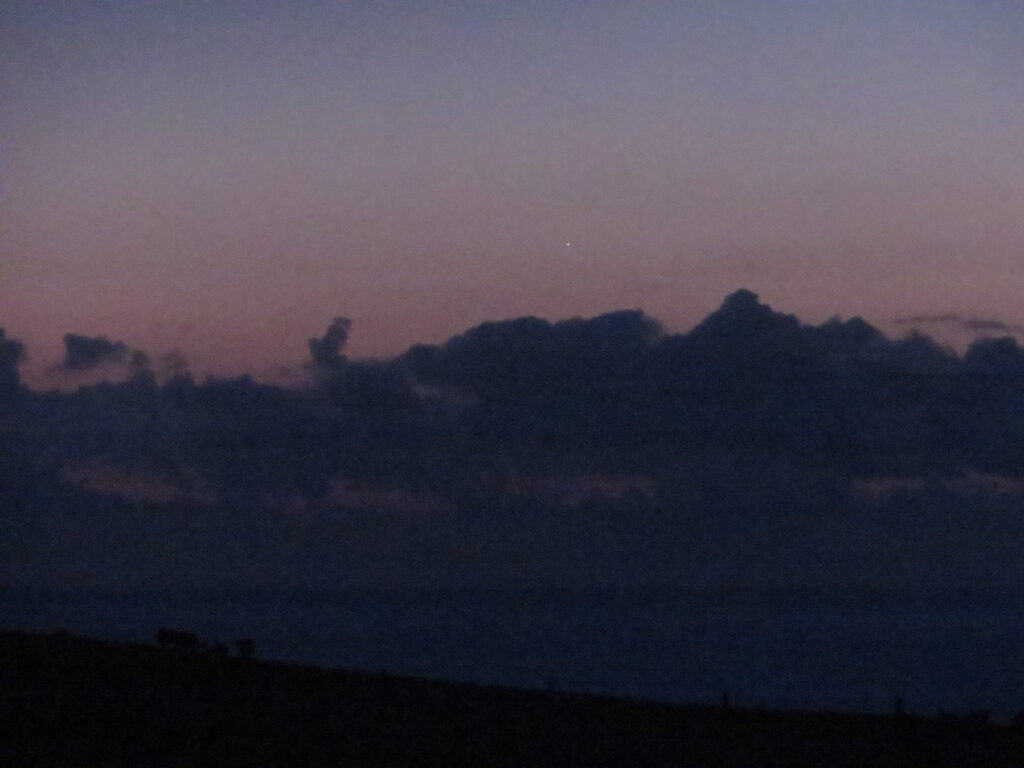 Where I live, there is an unobstructed view of the horizon to the setting sun. This full-on view also helps with watching setting planets like Mercury. Last July, I was lucky enough to observe and draw Comet C/2020 F3 Neowise over Clare Island. Venus pulled my eye to follow it during one of those late evening sessions. It was heading to the horizon line. It was one of those memorable nights where no cloud gathered on that line to impede my view. As I continued to draw Neowise, I was amazed to notice the light from Venus spilling out over the sea in a line towards me. Neowise was my goal, so I continued to draw. When I was packing up, I stood mesmerised by the planet Venus setting. A stunning clear view, it is burned into my head. I think of it as the drawing that got away.

Since then, I am more aware of planets setting, so the recent appearance of Mercury had me try again. Then on May 12th at 21:19, I took the image above a massive dark cloud that lingered, preventing further observations. On May 5th, I spotted it above similar clouds, small but bright against the pale blue sky. Finally, on May 6th, I decided to try for a drawing despite the clouds as I was conscious that this might be my only chance considering the weather forecast.

It’s a pastel drawing showing Mercury in a milky blue sky above lingering peachy clouds. An odd glow in the water near the rocky island is for the moment unexplainable. As it grew darker local sheep presented themselves as black bumps on the edge of the hill. Misty rain seemed to be pouring from one cloud into another over the Atlantic. Soon tiny Mercury joined Venus and the sun below the horizon.

The clouds giveth and the clouds taketh away

On May 13th, I watched the young crescent moon and Mercury descend together into coal-black clouds. However, there was a gap between one massive cloud and another black horizon hugging variety.

The clouds were drifting south slowly. I got my drawing gear ready and watched the gap. I figured at the time, the gap was large enough for the moon / Mercury conjunction to fit inside. Then the gap began to fill from right, limiting the possibilities. When the moon finally made an appearance, Mercury was, of course, hidden behind inky clouds.

The clouds were drifting south slowly. I got my drawing gear ready and watched the gap. I figured at the time, the gap was large enough for the moon / Mercury conjunction to fit inside. However, the gap began to fill from right, limiting the possibilities. When the moon finally made an appearance, Mercury was, of course, hidden behind inky clouds.

Watching Mercury like this reminded me about a solar system workshop I used to do. In the presentation, I would tell the children something interesting about each planet. In Mercury’s case, its craters are named after classical composers, artists and writers.

I would ask if anyone knew the name of a famous composer. Sometimes hands would go up, a child trying to be funny would answer Freddy Mercury; the class would laugh away. Even the teachers were amused. Sometimes the Freddy Mercury answer was genuine. Usually, one child would say Beethoven or Mozart, but occasionally, a child would stand up and say, Debussy or Vivaldi. When that happened, the teacher would look astonished because they were surprised those children had an answer to offer.

When asked for a famous artist that might have a crater named for them on Mercury, the hands flew up. Michaelangelo the most common answer. Occasionally Dali was offered, and again, the look of unexpected amazement on the teachers face was priceless.

Cover Image: May 12th 21:19 Mercury a dot, just above the clouds to the left of Clare Island Co Mayo