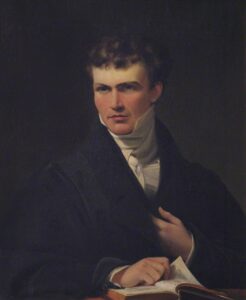 Readers of The Catholic Astronomer should check out a newly published paper by Michael J. Crowe entitled “William Whewell, the Plurality of Worlds, and the Modern Solar System.” In this paper Crowe—who is the Rev. John Cavanaugh, C.S.C., Professor Emeritus in the Program of Liberal Studies and the Graduate Program in History and Philosophy of Science at the University of Notre Dame, and one of a relatively small number of scholars who study the history of human thought concerning intelligent life on other worlds—suggests that Whewell was the first person to envision the modern solar system.  This is Rev. William Whewell (1794–1866), Master of Trinity College of Cambridge University.  He features prominently in Laura Snyder’s The Philosophical Breakfast Club.  So how does Whewell qualify as the first person to envision the modern solar system?

Here’s how:  In the geocentric universe of Aristotle—the model of the universe that dominated science across 1500 years and across polytheistic, Islamic, and Christian cultures—the Earth was unique.  The Earth was the only world—the only place with dirt and water and air to breathe.  The heavens were made of a substance not found here on Earth but that actually comprised the vast majority of the observable universe.  Think of this substance as an Aristotelian version of dark matter or dark energy, except that bits of it could be seen, and comprised things like Vega, Arcturus, Venus, and Saturn.  Venus and Saturn were lights in the sky—wandering stars (as opposed to fixed stars like Vega and Arcturus) made of this alien substance.  They were not places to live like Earth.

That changed with the heliocentric theory, which stated that the Earth and those wandering stars all orbited the sun.  No longer were Mercury, Venus, Mars, Jupiter, and Saturn celestial lights made of the mysterious substance, but bodies made of the same stuff as Earth, and orbiting the same sun due to the same principles of gravity and motion.  They were other worlds like Earth, visible to anyone with a telescope.

A Man that is of Copernicus’s Opinion, that this Earth of ours is a planet, carry’d round and enlighten’d by the Sun, like the rest of them, cannot but sometimes have a fancy, that it’s not improbable that the rest of the Planets have their Dress and Furniture, nay and their Inhabitants too as well as this Earth of ours: Especially if he considers the later Discoveries made since Copernicus’s time of the Attendents of Jupiter and Saturn, and the Champain and hilly Countrys in the Moon, which are an Argument of a relation and kind between our Earth and them….

Johannes Kepler assumed there must be intelligent life on Jupiter.  William Herschel said the sun—

—is most probably also inhabited, like the rest of the planets, by beings whose organs are adapted to the peculiar circumstances of that vast globe. Whatever fanciful poets might say, in making the sun the abode of blessed spirits, or angry moralists devise, in pointing it out as a fit place for the punishment of the wicked, it does not appear that they had any other foundation for their assertions than mere opinion and vague surmise; but now I think myself authorized, upon astronomical principles, to propose the sun as an inhabitable world.

(Emphasis added.)  The idea was that the surface of the sun was cool, beneath glowing clouds—and the sunspots were holes in the clouds through which you could see that cool surface.

Jerome de La Lande, senior director of the Paris Observatory in the late eighteenth century, felt it was foolish to think the solar system was not inhabited.  La Lande wrote:

The resemblance between the earth and the other planets is so striking, that if we allow the earth to have been formed for habitation, we cannot deny that the planets were made for the same purpose; for if there is, in the nature of things, a connection between the earth and the men who inhabit it, a similar connexion must exist between the planets and beings who inhabit them.  We see six planets around the sun, the earth is the third; they all move in elliptical orbits; they have all a rotatory motion like the earth, as well as spots, irregularities, mountains: some of them have satellites, the earth has one satellite: Jupiter is flattened like our world; in short there is every possible resemblance between the planets and the earth: is it, then, rational to suppose the existence of living and thinking beings is confined to the earth?  From what is such a privilege derived but the groveling minds of persons who can never rise above the objects of their immediate sensations?

Thus two hundred years ago it was a given that what we now call “space aliens” were abundant, inhabiting a “Plurality of Worlds” like Earth.  What seems to have motivated all this?  Crowe says that in part it was what we would call “The Copernican Principle”—the idea that there is nothing special about Earth.  And, he says, in part it was “The Principle of Plenitude”—the idea that God or Nature would not waste the efforts involved in producing the universe without placing within it widespread intelligent beings.  A modern framing of the Principle of Plenitude can be found in the 1997 movie Contact, in which the line appears several times that if there is not intelligent life out there, then the universe is an “awful waste of space.”

There are still those who hold out hope yet for finding extraterrestrial life in the solar system.  When he spoke in Louisville last December, V. O. Director Brother Guy speculated on sentient fish under the ice on Europa.  But the historical trajectory is against those Europan fish.  La Lande and Dick and Herschel would no doubt be stunned by the lifeless solar system we know today.  Crowe argues that the first person to foresee this lifeless modern solar system was William Whewell.

We will talk about that in part II, next week.