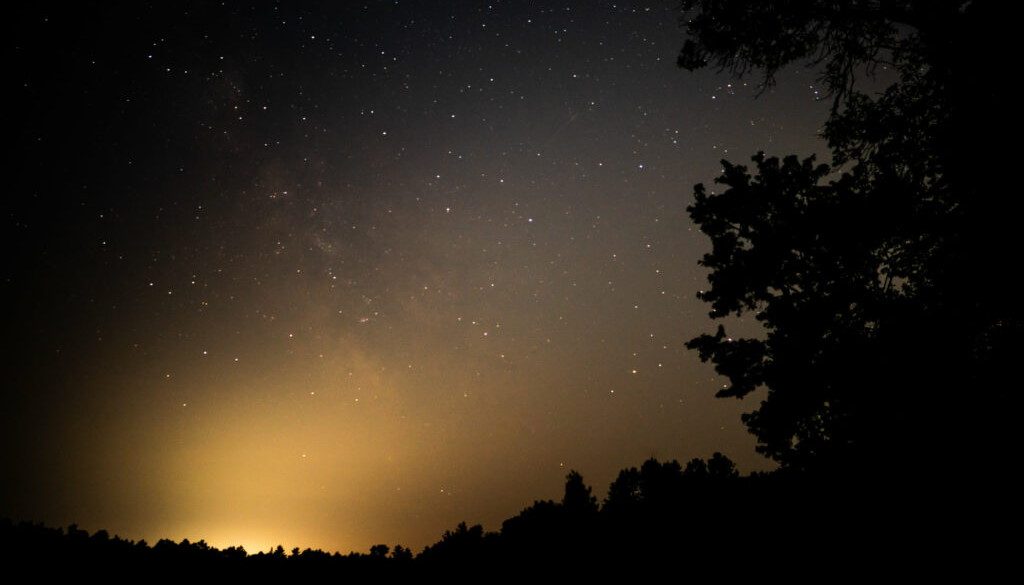 If you live in North America, you probably have noticed the skies look a little hazier than usual. The haze is not new at this time of year, especially for those who live in Canada and the northern United States. This year, however, it seems the haze from wildfires is a little thicker than usual and is staying longer.

In my home state of Wisconsin, smoke from the Canadian fires has made its way to my home and has caused Air Quality Advisories on a regular basis. Yes, the health risk from these fires is more important than my astronomical pursuits, but I would be lying if I didn’t admit that I have had occasional moments of murmuring under my breath, “Dang Canadians” while trying to image the night sky.

One of my favorite Canadian astronomers to follow online, Trevor Jones of AstroBackard, playfully apologized in his latest video to all astronomers impacted by the Canada wildfires – On behalf of Canada, We’re Sorry. His words gave me a smile, prompting me to say – Trevor, if you see this, your apology is not necessary, but appreciated!

As is true with all uncharitable thoughts, it would be unfair to pin all of our hazy nights on Canada alone. Though the majority of wildfire smoke we are dealing with in Wisconsin is from Canada, there are many fires burning out of control in the United States as well. When looking at wildfire maps, two thoughts pop into my mind: 1. It looks like much of North America is on fire; and, 2. Is this normal?

The maps tell the story of how prevalent wildfires are in North America, but answering the question, “Are these fires normal,” can get a little complicated. For example, wildfires are common and, at times, necessary to promote new growth. Most wildfires are caused by weather events, such as the comingling of dry conditions and lightning strikes. From that standpoint, we can see a natural cycle to wildfires that would prompt some to say to frustrated astronomers, Deal with it – this is natural.

At the same time, we also see routine examples of arson leading to wildfires. These manmade fires cause destruction that would not otherwise occur. Also, there is much speculation that climate change may be playing a role in the increased amount of wildfires.

In a piece by Jessica Merzdorf of NASA Goddard from 2019, she beautifully lays out the complex relationship between climate and wildfires. As is often the case with climate science, there is much that has yet to be learned. At the same time, changing weather patterns are creating areas in the United States that are both dryer than normal and wetter than normal. The comingling of shorter winters leading to longer dry seasons combined with more extreme weather that literally spark wildfires begs the question – Is human activity partially to blame for our hazy skies?

The question of wildfires not only points to the Catholic Church’s call to Care for Creation, but also touches areas of sinfulness such as the destruction of property through arson. Yes, wildfires are natural, leading to times of frustration for us “astro-nerds” that need to deal with this cyclical reality. At the same time, there is much we can do to minimize these events, allowing nature to run her course without forcing upon nature something that is unnecessary. Yes, land management is part of Care for Creation and has moral implications. Let us care for our land, God’s creation, so that we can live in a healthy environment and allow astronomers the ability to do their work of observing the heavens.

Two days ago, I went back out to do some more imaging on the night sky. The wildfire smoke is still present, but dissipating. My hope is to try some new techniques I’ve learned to image Andromeda in the days to come. In the meantime, let us continue to pray with the question of how we are called to care for the created world around us. Let us learn to properly manage our environment not just so I can have clear skies to enjoy, but that we can have a healthy environment to treasure and share with current and future generations.