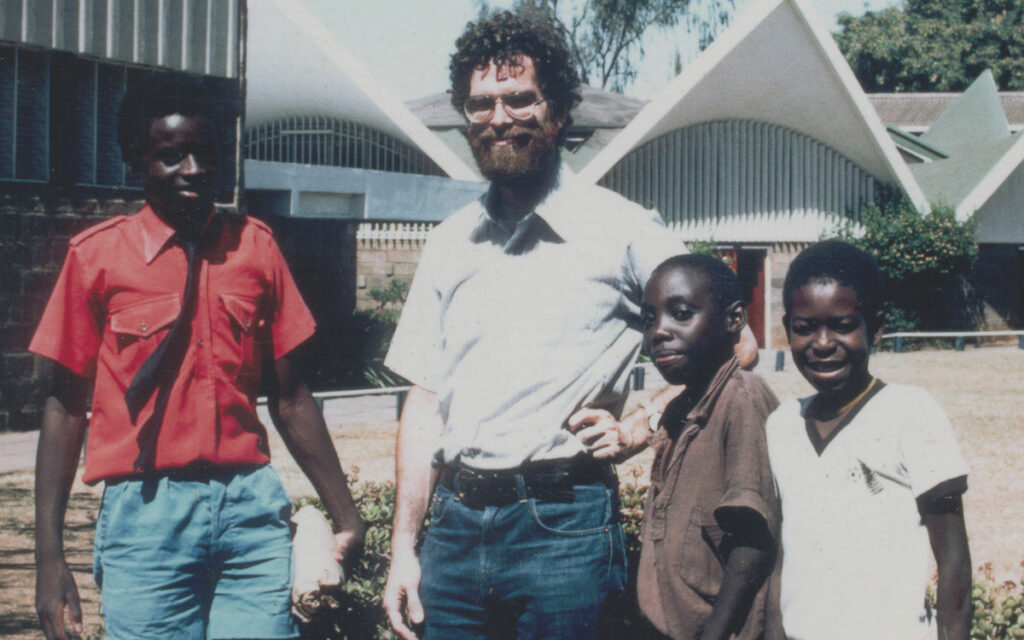 And then I wrote… as many of you know, I was a Peace Corps volunteer in Kenya from 1983-1985. Thirty years later, in 2015, I was invited to write an article for the National Peace Corps Association magazine WorldView. This article ran in 2016.

One of my best Peace Corps experiences was working with some of Kenya’s fantastically gifted students. The University of Nairobi was the only university around, in those days; we got the top fraction of the top one percent of all the kids studying in Kenya. But most of these students had passed their high school leaving exams by memorizing the “right” answers. Our challenge was to teach them how to think beyond getting the right answer.

My office mate, a Kenyan with a PhD from Boston College, lamented to me one day, “I had three students here earlier; they complained my homework was too hard because they’d looked through every book in the library and couldn’t find the answer!” They were hard workers; but they hadn’t learned yet what all good physicists know: hard work sometimes means that you haven’t thought through the problem well enough.

And so I would end every physics lecture with a logic puzzle from one of Martin Gardner’s books, puzzles that he used to run in Scientific American. We would go over the answers at the next class. They loved the challenge. And it got them to really think.

One day a PhD student in psychology asked permission to test my class for the ability to understand, rather than to regurgitate. One question was a true-false question: “The length of a pendulum depends on the period of time it takes to oscillate.” If all you know is the equation, you’ll say, ‘True’; if you understand the difference between cause and effect, you’ll realize that’s just backwards. Unlike most of the other physics classes he tested, mine really understood the material.

It made me happy for my students… and it also told me that maybe I wasn’t so bad at this teaching stuff. I’ve been doing it ever since.

Even more important than teaching physics in Nairobi were the days when I went upcountry to visit my fellow Peace Corps Volunteers. Everyone in their villages wanted to look through my telescope. Seeing their reactions while looking at the sky was when I finally understood why I do astronomy.

I had already learned, after 5 years as a lecturer at Harvard and MIT, that I did not want to be a big-time professor. It’s not just that I wasn’t hungry enough, or good enough; I just didn’t want to live that life. This was the early 1980’s, the start of the high-tech world. Software companies of Cambridge and Route 128 were getting big. I had a job offer from the people who invented the very first spreadsheet program for personal computers: Visicalc. Never heard of it? The company went belly-up while I was in the Peace Corps because the spreadsheet idea was swiped by bigger players in the field. Just as well I turned them down.

My sister had been in the Peace Corps in Senegal, and the woman in Cambridge who I was dating at the time had talked about doing the same some day, herself. She never did; but I applied, not quite knowing where I would end up.

I counted on travel, adventure, and teaching. And maybe I would finally shut up that conscience of mine, I thought. Conscience… my good Catholic upbringing in Detroit had left me with that unfortunate thing, a conscience. It would bother me at three in the morning, asking me, why should I spend my life studying the moons of Saturn when there were people starving in the world?

It was in upcountry Kenya that I finally understood why we do astronomy, even in the face of starvation. They were curious to know about the moons of Saturn as much as I was! All  human beings share a hunger to know about how we fit in the universe, and a delight in seeing and understanding the stars. That hunger is an essential part of what makes us human. We don’t satisfy all our hungers by bread alone. But if we deny that hunger, we deny our humanity.

Science, God and the universe

Being in the Peace Corps in Kenya also taught me an important lesson about how God acts in our world.

One of the challenges we all faced in the Peace Corps was that we came into a host country with all the unearned advantages we have, from been born in a place where we could have good health care as children, a good education, the self confidence to accomplish things; advantages that we now recognize as “privilege”. It was always a temptation to use that privilege, to rely on it, when we were working in our host countries. It was hard not to; it was hard not to just go in and “fix things ourselves.” But it also wasn’t the right way to behave.

The goal of a Peace Corps volunteer is not to be the outsider who messes around with the local culture in the name of “fixing things”. It is to be someone who enters into the local culture, at least partially, and who enables others to be really themselves, without trying to replace them or control them.

That is just a very faint echo of what I see in the bigger universe: God enables us, but lets us learn how to do things for ourselves. What I see in how the universe works is that God doesn’t act like a god. And that’s pretty amazing.

And one of the things we are enabled to do, as human beings, is to study that universe with the tools of science. The instructions I received when I joined the Vatican Observatory more than twenty years ago are exactly what I pass on to the rest of the staff today, as the new head of The Specola: Do Good Science. That’s it. (The whole point of the Vatican Observatory is to show the world that we support good science, so we have to be doing good science or else what we do is pointless.)

We have eleven active full-time researchers on our staff – an expert on quantum gravity and string theory, another on galaxy clusters and stellar evolution, on the theory of timekeeping, on the search for extra-solar planets. Two of our astronomers in Tucson use our telescope there to measure the compositions of stars in our own Milky Way. Two of us measure the physical properties of meteorites in the lab here in Rome; another observes the near-earth asteroids that we think were the sources of some of those meteorites. And we all collaborate on research with colleagues all over the world.

Science and the fundamentalists

We all love the universe, and we all love science. Even the so-called creationists call what they are doing, “creation-science” – that means that even they want the cachet of the word “science.” But I think there’s a basic misunderstanding of what science is.

Actually, speaking to “creationists” – whose ideas of science and religion are very, very different from mine – I have come to realize that a lot of the bad reputation science has gotten among those on any given side of a political or social issue comes when people see their opponents using “science” to justify stuff that they think is horrible. And I have to admit that science is abused in this way by lots of people, including people whose goals I agree with.

Fundamentalists of any stripe – including those who I would call “science fundamentalists” who read this week’s latest science as their gospel – are often acting from fear. And often the fears are legitimate, even if I disagree with the actions that come out of such fear.

The irony is that using science in such a way is unscientific; it misrepresents the nature of what science really is. Science is not a big book of proven facts. It’s a conversation about what each of us sees in the universe, with the goal of helping all of us see things more deeply. But the conversation is never ending; that means that no one ever has the last word – though some ideas will be closer to reality than others – and we can learn even from people we strongly disagree with.

Isn’t that what we learned to do, living in different cultures with the Peace Corps?

My religion gives me the courage, and the motivation, to do my science. What do I mean? I could not do science if I did not believe in a universe that works according to logical rules. The ancient pagans didn’t believe that; they explained everything they saw in nature as the whims of some unpredictable nature deity. You have to reject such a belief to begin to start looking for logical reasons for why things work the way they do.

It’s even more amazing that we puny humans can figure out some of those rules, imperfect as our knowledge is. But I have to believe that that is possible, or else I just throw up my hands in despair.

We all grew up with these ideas of the Great Men and Women of Science. But it’s something else to realize that you’re expected to walk in their footsteps.

On the other hand, the more you read about them, the more you can recognize in people like Kepler and Galileo the same hopes and fears and ambitions… and mistakes… that we see in ourselves and in our colleagues. It makes them more human, more accessible somehow.

It also reminds us that no matter how profound our work is or how much it changes the way we all see the universe, none of it stays up to date. We honor Copernicus and Galileo – and rightly so – but no scientist actually reads their work to learn science from it anymore. The field has moved on.

Contrast that with the literature or philosophy of their contemporaries; after all is said and done, we still read Shakespeare and Descartes.

My religion gives me the courage, and the motivation, to do my science. I could not do science if I did not believe in a universe that works according to logical rules. The ancient pagans didn’t believe that; they explained everything they saw in nature as the whims of some unpredictable nature deity. You have to reject such a belief to begin to start looking for logical reasons for why things work the way they do.

It’s even more amazing that we puny humans can figure out some of those rules, imperfect as our knowledge is. I have to believe that that is possible, or else I’d just throw up my hands in despair.