I was intrigued by the European Space Agency’s mission to comet 67P/ CG (Churyumov–Gerasimenko). Some of you might ask what is a 67P ?  . 67P/ CG  is a periodic comet. That means  that as it orbits the sun its pathway brings it between the orbits of Jupiter and Earth once every 6.5 years.  The short orbit makes it a periodic comet with a very predictable trajectory.  Comets are named after the person or group of people or telescopes who discover them. Back in 1969, Klim Ivanovich Churyumov and Svetlana Ivanovna Gerasimenko, discovered this comet jointly.

The European Space Agency built the Rosetta space craft to rondezvous with a comet, it launched in 2004.The comet eventually choosen was 67P/C G.  ESA sent a passenger along with Rosetta , this companion was the Philae Lander. This is a small probe ( about the size of a washing machine) .  Philae’s job was to land on the comet and investigate the surface and the activity on the comet . The entire mission was of epic proportions. Landing on a comet had never happened before.

In fact nobody knew what this comet even looked like because it is the nature of comets to cloak themselves in their own self-produced dust and gasses.  The dust/ gas surrounds the  comet as it moves through space hiding the nucleus and its secrets. Rosetta and Philae were undertaking an adventure of epic proportions.

During 2014 I decided I was going to make a model of 67P C G . Having models or something tangible in the room is always an ingredient of my workshops.  So I took myself off to a local recycle plant in search of a large chunk of polystyrene .  When I eventually ( after months) found a suitable block I then had to wait to see what Rosetta’s images would reveal.  Oh boy !!  the first image was  very complex.  However I had to give it a try. It took a lot of carving and cutting , my yard looked like it had snowed . The polystyrene stuck to my hands and face, white beads  were flying through the air like mini comets.  After several weekends my model of 67P/ CG began to take shape. I used an image on my phone to work from while I hoped for more images from the amazing  Rosetta. At one stage I had to add extra polystyrene from an areosol can as one end of 67P/ CG was much larger than the other.

As the mission continued  my  comet model developed alongside a model of the Rosetta Spacecraft and a small model of the Philae Lander. I was almost ready to offer my Action Comet workshops to Science Foundation Ireland and other bodies so that children could learn about the mission. The Rosetta Spacecraft and Philae were also made from recycled materials with as many science instruments as I could muster included.

My Action Comet workshop was supported by The European Space Agency.  They kindly sent me lots of Rosetta stickers, posters, cut out Philae kits and mission pins to give away to attendees.  It is always lovely to have these kind of educational products to give away . It was handy also that ESA sent a lot of Rosetta booklets so I could give them to teachers to extend the learning after the workshop. Every library I dealt with also got a booklet for their shelves and a poster for their wall.  My workshop was further enhanced by using the many beautiful Rosetta educational  cartoons made by ESA for the mission.

The workshop began with a twenty-minute presentation about the mission , its purpose , its goals, the latest images. The role of Irish scientists in the mission was mentioned in every workshop.  Having my models in the room, hugely increased the story of the mission for children to enjoy.  Children were challenged to produce a pencil drawing of 67P/CG, a task they carried out with surprising enthusiasm and inventive pencil work.  This was followed by  each child making a mini comet from a small polystyrene ball and long streams of paper representing the gas and dust tails of comets in general.  Occasionally the children made plasticine models of 67P/CG itself depending on their age group.  Thousands  of children took part in my Action Comet workshops over two years or so.

Just two days before Christmas 2017, a large envelope arrived. Inside was a Certificate of Recognition from The European Space Agency for my contribution to the Rosetta mission.  A massive surprise , totally unexpected.  I feel very grateful and humble to have my workshops supported by ESA education and now to have this recognition has me smiling from ear to ear.

Thanks to all the teachers, schools, libraries , science centres, arts centres and observatories who hosted Action Comet. 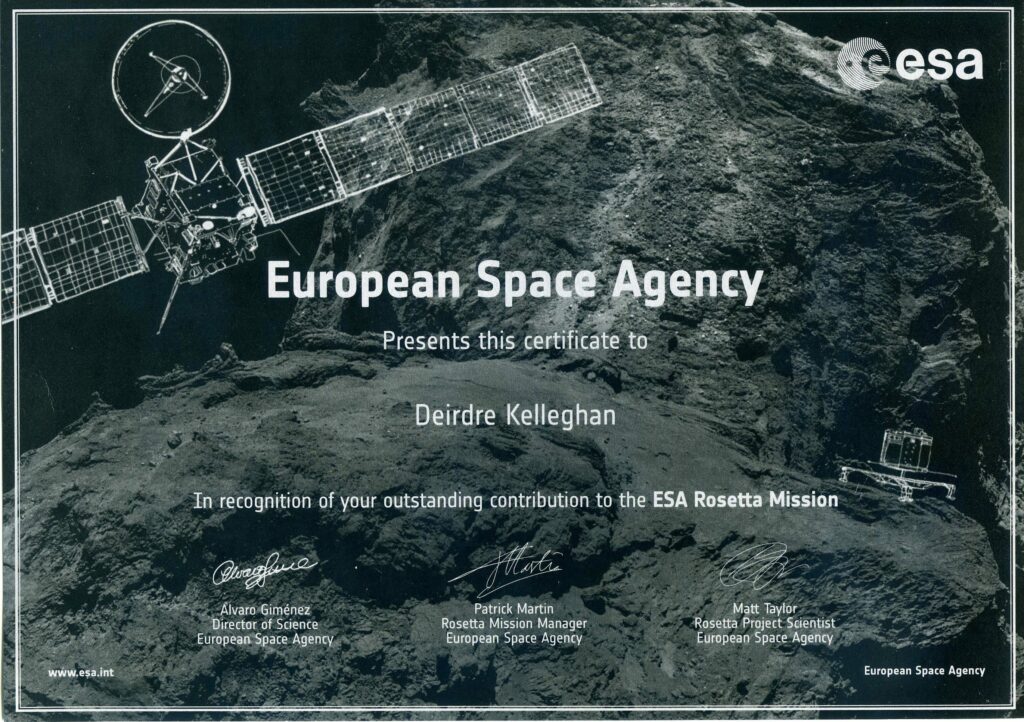 Link to all the Rosetta / Philae Lander Cartoons , they are outstanding

Link to ESA to learn more about Rosetta and Philae