I saw a banned film this week! And it led to you-know-who!

If you read this blog, you are likely familiar with NPR’s “Science Friday” show. You might have listened last Friday, May 15, and heard the segment called “Fact Check My Feed: Finding The Falsehoods In ‘Plandemic’”. For those of you who do not follow “Science Friday”—and who somehow have managed to miss all the rest of the hubbub over this—“Plandemic” is a video, a short film, if you will. It primarily consists of an interview with a scientist named Dr. Judy Mikovits. Mikovits has renegade ideas regarding the coronavirus, vaccines, and the medical world. Of course, your cousin Joey has renegade ideas about these things, too. But Mikovits is co-author of a book called Plague of Corruption that has a foreword by Robert F. Kennedy, Jr. (a prominent figure in the anti-vaccine movement) and that has been the top seller on Amazon recently. 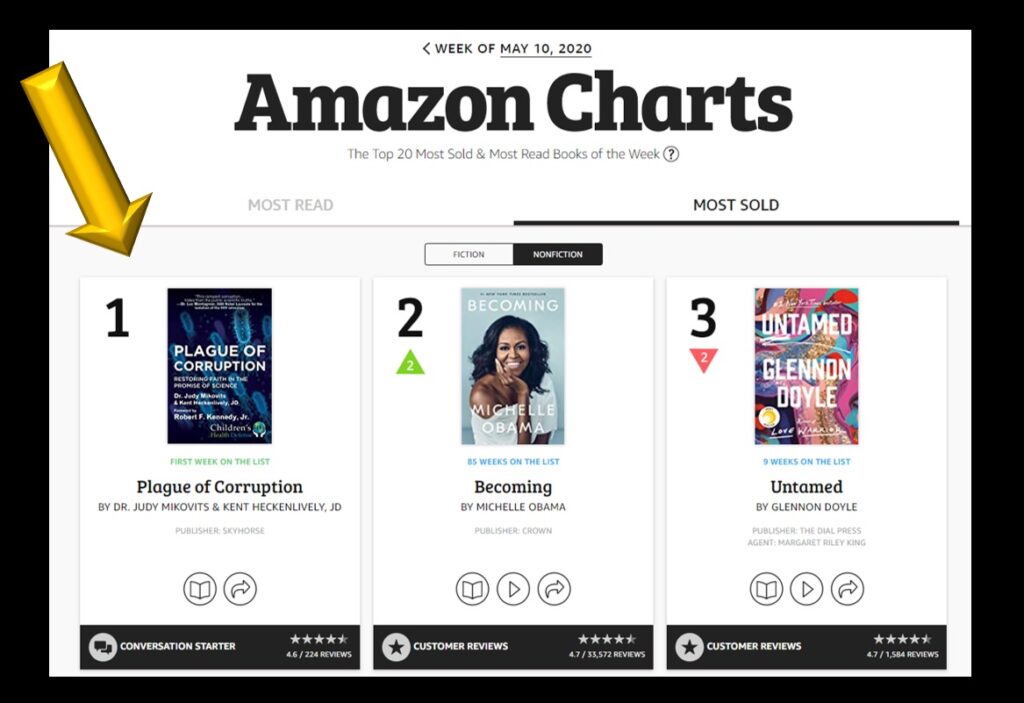 I wanted to see the video before writing this post, but “Plandemic” has been banned by the big internet companies, and someone hacked its web page (which now—or at least when I looked for it—features a short statement, replete with a few common crudities, asserting that Mikovits is crazy). It took some work to find the film. But I found it. And I watched it. I believe this is the first time I have ever watched a banned film.

When I was growing up in Owensboro, Kentucky, there was a drive-in movie theater that liked to show “banned” films—typically B-grade horror flicks loaded with gore; the kind made by a guy whose cousin works at the local butcher shop and can get hold of lots of offal for “special effects”. The drive-in would advertise movies “banned in 30 countries” and promote a “free barf bag with each ticket purchased”. This classy operation was located over a mile from my house, but because the ground between it and home was low, and mostly fields, from my back yard on summer evenings I could see the screen flickering in the distance. I would sometimes use my telescope to try to see what was showing. But seeing the screen one-eyed through the eyepiece, half-blocked by trees, image inverted, with no sound, was pretty much pointless. My eighth-grade self could never really make out anything, could never really brag to my friends that I had seen one of those banned movies. Had that younger, telescope-peering self known that this video of two middle-aged people talking would be my first experience with banned film, he would have been very, very disappointed indeed.

But my present, historian-of-science self is not disappointed at all. He loves this. Why? Because it was a “science” thing that was being banned. And banning a science thing, of course, means that talk of you-know-who is just around the corner. 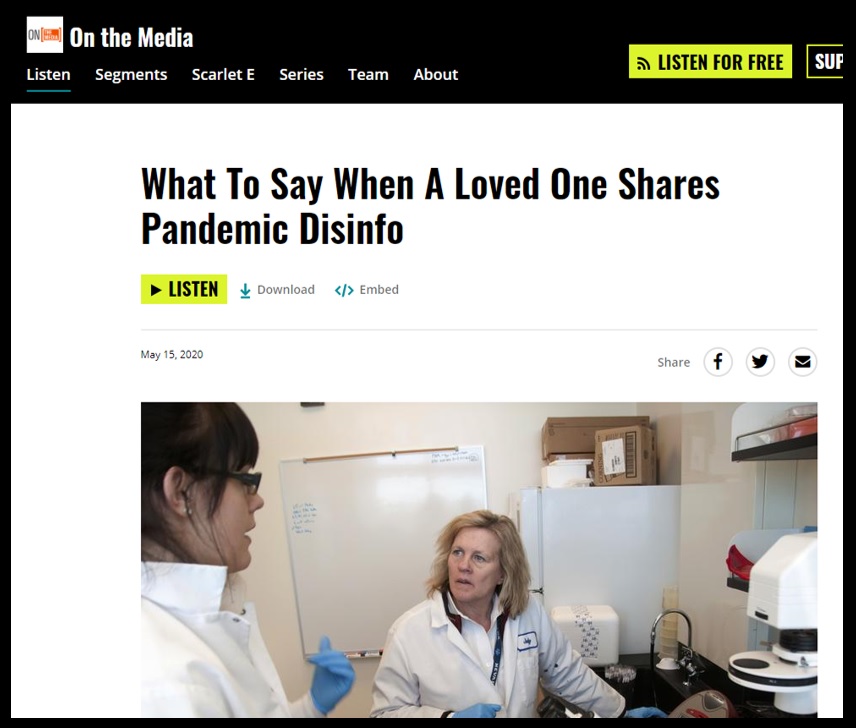 From the web page of “On the Media”. Mikovits is seated.

Also on Friday the 15th, NPR’s “On the Media” show devoted a segment to “Plandemic” and its banning. Noting the #1 rank Mikovits’s book had achieved on Amazon, the show’s host Bob Garfield remarked (at about 8 minutes in to the segment),

One of the things that makes this video, I guess, effective is that Mikovits is portrayed as a victim, someone who has been silenced by “The Man”, a martyr to truth-telling, which I guess is a recurring theme in the conspiracy genre…. The more that the social media platforms take down the video, the more juice it has among its potential audience. They are boasting of how great it is that Facebook and Google are playing to the stereotype of powerful institutions.

Powerful institutions suppressing a renegade scientist. A martyr to The Truth. Surely you-know-who’s name is coming—it’s just a matter of when. And indeed, Kennedy’s foreword to Plague of Corruption opens with…

And yet, it moves!

Galileo whispered those defiant words in 1615 as he left the Roman Inquisition tribunal before which he repudiated his theory that the Earth—the immovable center of the Universe according to contemporary orthodoxy—revolves around the sun. Had he not recanted, his life would be forfeit. We like to think of Galileo’s struggles as the quaint artifact of a dark, ignorant, and tyrannical era where individuals challenged government-anointed superstitions only at grave personal risk. Dr. Judy Mikovits’ story shows that stubborn orthodoxies anointed by pharmaceutical companies and corrupt government regulators to protect power and profits remain a dominant force in science and politics.

If this all just seems too scripted, right down to Kennedy getting the date wrong, well, it gets better. On that same Friday, May 15, “Science Friday” aired another segment, “Galileo’s Battle Against Science Denial”. This was an interview with astrophysicist Mario Livio, whose new book Galileo and the Science Deniers is just out from Simon and Schuster. I have just obtained a copy and begun to read it, but as the title indicates, the thrust of the book is to compare those who opposed Galileo to science deniers today. Those who opposed Galileo being, of course, Catholic Church flunkies. Interestingly, in his interview Livio echoes Kennedy to some extent, citing business and government interests as being part of what drives modern rejection of science, but Livio at least does not repeat the idea that Galileo said, “And yet, it moves!”  NPR, apparently going for the “Plandemic” Trifecta this past week, also featured Livio and a discussion of “Plandemic” together on their May 19 episode of the show “The 1A”. Livio here remarked (about 2 minutes into the show) that those who rejected science in Galileo’s time were motivated by a literal interpretation of scripture, mentioning the Catholic Church and noting that “they tried to deny what he was saying”.

Of course, the fact is that those who opposed Galileo were not ignorant and not science deniers. Galileo was not—

punished when he proved
that the sun was sitting still
and the earth’s the one that moved.

He was not forced to recant what he could see with his own eyes. No one denied his discoveries. As I have discussed many times on this blog, Galileo’s opponents were not rejecting science or refusing to acknowledge obvious data in the name of religion, money, or whatnot. They had science on their side—the science of Tycho Brahe, the top astronomer of the time. Telescopes and Earth-bound experiments seemed to support Brahe’s ideas. The Copernican theory at that time had some weird features. Scientists today who take the time to look at the evidence available in the early seventeenth century and look at it through early seventeenth-century eyes will agree that the science was not with Galileo. (Needless to say, I do not think Livio has looked at things through early seventeenth-century eyes, but I will let you know for sure when I have read the whole book.) Those who condemned heliocentrism were not rejecting science for religion. They were rejecting science for science—condemning ideas that they believed were scientifically untenable (“foolish and absurd in philosophy”) and that were also counter to scripture (“and formally heretical”).

“Science Friday”’s two May 15 segments and “The 1A”’s May 19 show both illustrate a certain perverse hypocrisy of those of us in the science world. We promote this Galileo myth of the victim, the scientist silenced by “The Man”, the martyr to truth-telling. We are so attached to this nineteenth-century narrative that we just keep repeating it, even when historians of science have long since abandoned it. It is our contemporary orthodoxy, which we accept regardless of historical evidence to the contrary. And thus, we regularly reinforce one of the foundations of the science rejection conspiracy genre. And with the very same breath in which we do all this, we proceed to complain about science rejection conspiracy theories, and go through the motions to “fact check” their “falsehoods”. We are like the gardener who busily fertilizes the roots of some tough weed, while complaining vociferously about the weed, and plucking off some of its leaves here and there. 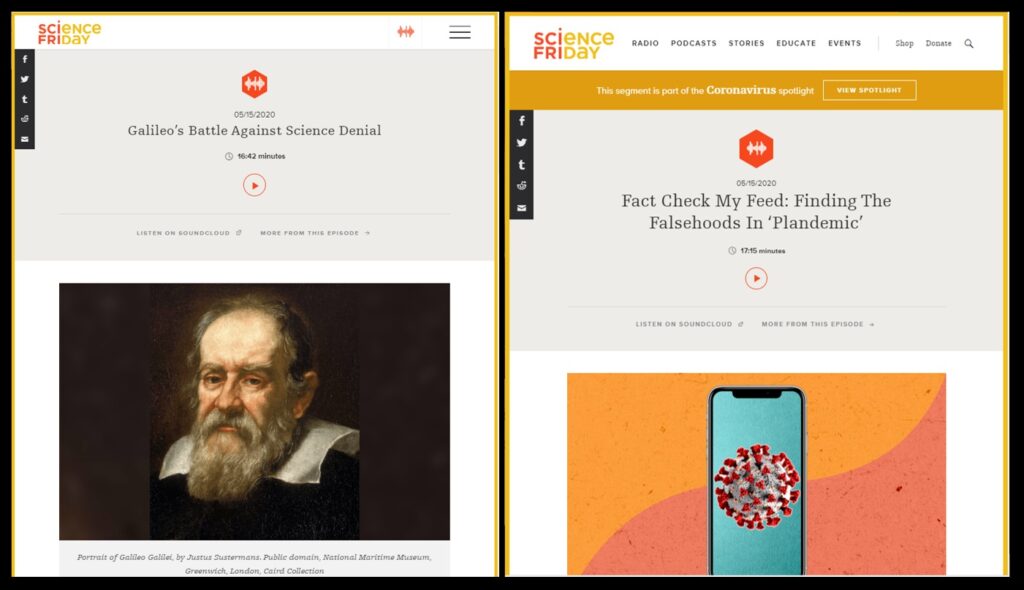 If we would be rid of the weed, we must dig it up by its roots. We can’t combat conspiracy theories about powerful institutions suppressing the truth in science when we constantly promote the Galileo myth about powerful institutions suppressing the truth in science at its very moment of birth! Attack the weed of conspiracy theory at its Galileo myth root. Provide a proper understanding of The Galileo Affair. Show how science actually worked in the seventeenth century, and how it actually works now. And then Kennedy might have to look hard for some other martyr figure to point to and get the date wrong. And it might be a whole lot harder to turn a book about conspiracy in science into a best-seller.

I am not going to hold my breath waiting on this. Sometimes it seems to me that science denialism is something we in the science world are all too willing to live with. We may complain about it, but in truth we are happy to have it, so long as we can ignore historical evidence and cling to our cherished orthodoxy about Galileo and how his ideas got banned by The Man, y’know, because, even though he proved that the Earth goes around the sun, y’know, that wasn’t what was in The Bible. And They could see the Earth moving right through one of those telescopes he invented, but They wouldn’t admit it. So They got him, y’know, and They broke him. Burnt him at the stake! But as he was going up in flames, he yelled “And yet, it moves!” So he showed them in the end, if y’know what I’m saying.

I guess maybe it gives us something to bond over with cousin Joey. 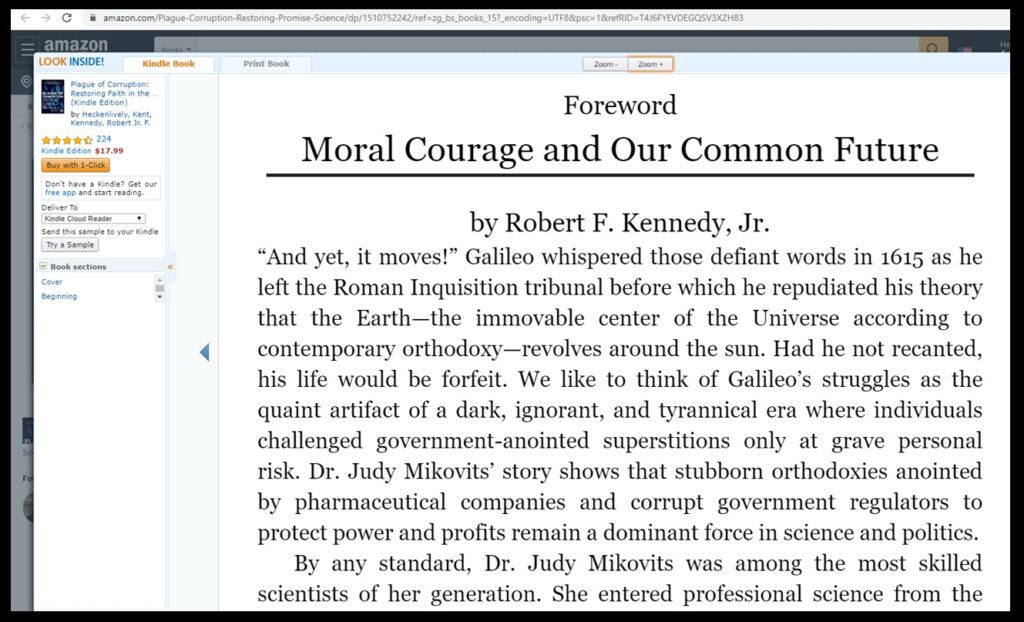