Do young Catholics leave their faith because of science? Some data say they do. In 2017, St. Mary’s Press of Minnesota and Georgetown University’s Center for Applied Research in the Apostolate published Going, Going, Gone: The Dynamics of Disaffiliation in Young Catholics. This very short book was a report on a study done in 2015 of young former Catholics, ages 15-25 at the time. Those former Catholics would today be ages 20-30.

The study involved a national survey that sifted through almost 4000 young adults (ages 18-25) and teens (ages 15-17) to find 184 young adults and 20 teens, all who self-identified as Catholic in the past but did not self-identify as Catholic at the time of the survey. The median age at which these folks abandoned Catholicism was 13 (that is, of the 204 respondents in the survey, half stated that they had left Catholicism at age 13 or earlier, half said they left at age 13 or later). One of the reasons that these young former Catholics cited for leaving Catholicism was science. 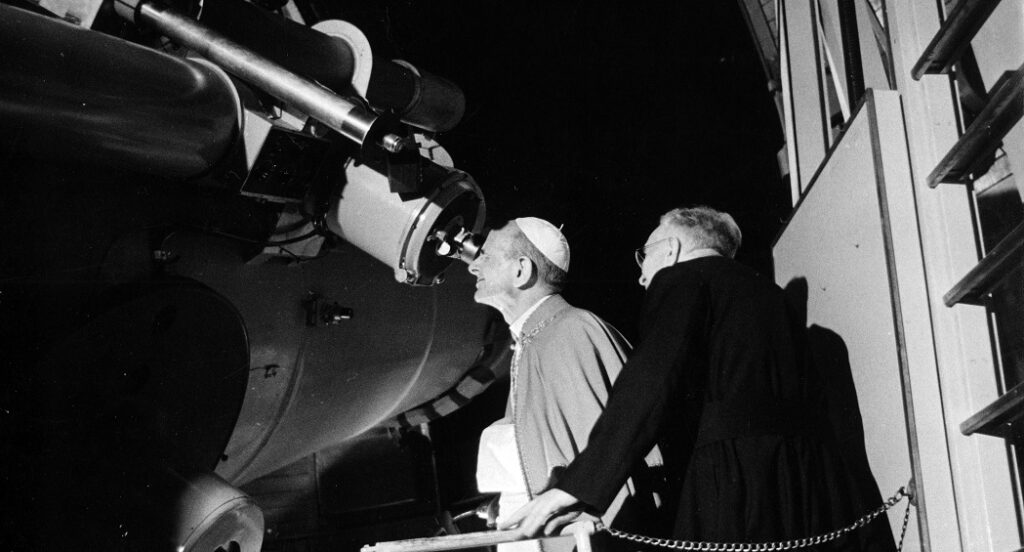 Pope St. Paul VI looking at the moon through a Vatican Observatory telescope.

Science came up in the seventh question of the survey. It read:

There are many reasons people might leave Catholicism. Please indicate how important, if at all, each of the factors listed below were in your decision to no longer be Catholic.

Twenty-four different factors were then listed, and respondents were asked to rate each with one of these four levels of importance:

Of the twenty-four factors, the two highest-rated factors were

Stopped believing in what the Catholic Church teaches

Did not like the Catholic Church’s rules and judgmental approach

And next, ranking #4 out of 24 possible factors, was

Church conflicts with my scientific beliefs

What ranked #5? That was

So science ranked high, including above loss of belief in God. Notably, it ranked above factors like Reaction to the sexual abuse of minors committed by Catholic clergy, or A tragedy or death affected me and I began to question my faith, or Found a religion I like more, or Did not feel welcome in the Catholic community, or Believe the Catholic Church has become too liberal or progressive/too traditional or conservative, or The Catholic Church wasn’t meeting my spiritual needs, and a dozen others.

Before we proceed further: Remember, O Readers of Sacred Space Astronomy—O Readers of this SCIENCE BLOG—that a study like this has to be taken for what it is. “Reproducibility” is key in science. If we ran this study again, would we get the same results? How would the results change if we just re-arranged the order of the twenty-four factors? Or if we changed the wording slightly? For example, if we changed the wording on the “science” factor from “Church conflicts with my scientific beliefs” to “Church teachings conflict with scientific evidence”? After all, “scientific beliefs” is a weird phrase, and perhaps carries within it the suggestion that science is sort of a religious activity in conflict with church. I doubt anyone is going to rigorously reproduce this study several different times to test all this out, so we will not know the answers to these questions. Moreover, the authors of Going, Going, Gone themselves state that the sample of 184 young adults and 20 teens “results in a margin of sampling error for all respondents of +/- 6.9 percentage points”. That’s a lot of error. And that’s just the inherent error that arises from the process of asking a sample of people questions and supposing their answers represent all 15-25 year-old former Catholics.

So, do not accept these results as being handed down from On High on Stone Tablets. What I would take away from this study is simply that there is reason to believe that science is indeed a factor in the decisions many young people make to leave Catholicism—along with other factors, such as not believing in what the Church teaches, not liking its rules and judgments, political conflicts with teachings, and loss of belief in God.

However, what is unique about the “science” factor is that it can be addressed. After all, if someone says he or she does not believe some Church teaching—for example, if someone says “I think that ‘Communion of Saints’ stuff in the Creed is completely bogus”—well, that is tough. After all, the Communion of Saints is indeed in the Creed. Or if someone says “I hate Lent and the abstaining from meat on Fridays”—well, Lent is indeed part of Catholicism, and abstaining from meat is part of that. And obviously lack of belief in God would be a Big Problem! But conflict with science is not in the Creed, obviously, and it is not part of Catholicism.