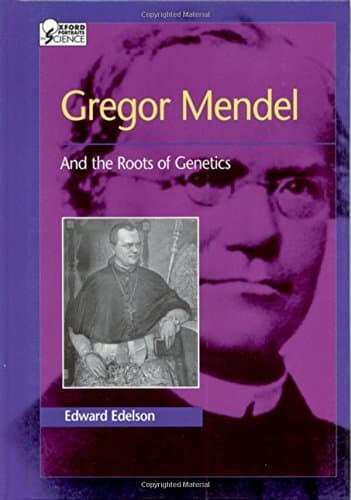 This book by Edward Edelson is part of the Oxford Portraits in Science series for young adults. The general editor of this series is Owen Gingerich, a historian of science with Harvard University, and an astronomer with the Harvard-Smithsonian Center for Astrophysics. This book discusses the work and life of Gregor Mendel, who is recognized today as being the founder of the modern science of genetics. Mendel was a monk and later abbot of the Augustinian monastery at Brno in the Czech Republic. Edelson writes:

[In] an Easter sermon. Mendel took special note of the way that Christ appeared to Mary Magdalen when he rose after his crucifixion: as a gardener. He wrote that “the gardener plants seed or seedlings in prepared soil. The soil must exert a physical and chemical influence so that the seed of the plant can grow. Yet this is not sufficient. The warmth and light of the sun must be added, together with rain, in order that growth may result.” Mendel used this image from the world of nature to illustrate how “the germ of supernatural life, sanctifying grace, is put into the soul of man.” So even as a priest, Mendel referred to his work with plants.

When Gregor Mendel passed away in 1884, not a single scholar recognized his epochal contributions to biology. The unassuming abbot of the Augustinian monastery in Brno (in today’s Czech Republic) was rediscovered at the turn of the century when scientists were stunned to learn that their findings about inheritance had already been made by an unknown monk three decades earlier. A dedicated researcher who spent every spare hour in the study of the natural sciences, Mendel devised a series of brilliantly simple experiments using a plant easily grown on the monastery’s grounds–the garden pea. In the course of just a few years he made the famous discoveries that later became the centerpiece of the science of heredity. In an entertaining and thoroughly informed narrative, Edward Edelson traces Mendel’s life from his humble origins to his posthumous fame, giving us both a brief introduction to the fascinating science of genetics and an inspired account of what a modest man can accomplish with dedication and ingenuity.