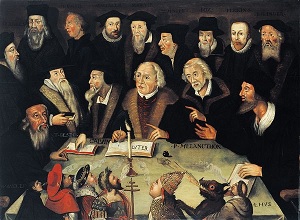 In this 2017 article in in the journal Nature, author David Wootton writes on the Protestant Reformation and the Copernican Revolution:

Were the Reformation and this revolution merely coincident, or did the Reformation somehow facilitate or foster the new science, which rejected traditional authorities such as Aristotle and relied on experiments and empirical information? Suppose Martin Luther had never existed; suppose the Reformation had never taken place. Would the history of science have been fundamentally different? Would there have been no scientific revolution? Would we still be living in the world of the horse and cart, the quill pen and the matchlock firearm? Can we imagine a Catholic Newton, or is Newton’s Protestantism somehow fundamental to his science?

Wootton notes that “it is still widely argued by historians of science that the Protestant religion and the new science were inextricably intertwined, as Protestantism turned away from the spirituality of Catholicism and fostered a practical engagement with the world”.  Wootton’s argument, however, is that it this is not so: “If we are looking for the preconditions of modern science, it’s to Gutenberg [of the printing press], not Luther, that we should turn.”