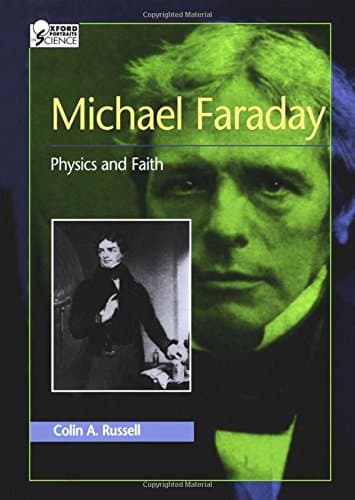 This book by Colin Russel is part of the Oxford Portraits in Science series for young adults. The general editor of this series is Owen Gingerich, a historian of science with Harvard University, and an astronomer with the Harvard-Smithsonian Center for Astrophysics. It discusses the life and work of Michael Faraday, one of the more prominent physicists in the history of science. As the book’s title suggests, Faraday was a religious man.

Michael Faraday (1791-1867), the son of a blacksmith, described his education as “little more than the rudiments of reading, writing, and arithmetic at a common day-school.” Yet from such basics, he became one of the most prolific and wide-ranging experimental scientists who ever lived. As a bookbinder’s apprentice with a voracious appetite for learning, he read every book he got his hands on. In 1812 he attended a series of chemistry lectures by Sir Humphry Davy at London’s prestigious Royal Institution. He took copious and careful notes, and, in the hopes of landing a scientific job, bound them and sent them to the lecturer. Davy was impressed enough to hire the 21-year-old as a laboratory assistant.

In his first decade at the Institution, Faraday discovered benzene, isobutylene, and two chlorides of carbon. But despite these and other accomplishments in chemistry, he is chiefly remembered for his work in physics. In 1831 he proved that magnetism could generate an electric current, thereby establishing the field of electromagnetism and leading to the invention of the dynamo. In addition to his extraordinary scientific activities, Faraday was a leader in his church, whose faith and wish to serve guided him throughout his career. An engaging public speaker, he gave popular lectures on scientific subjects, and helped found a tradition of scientific education for children and laypeople that continues to this day.