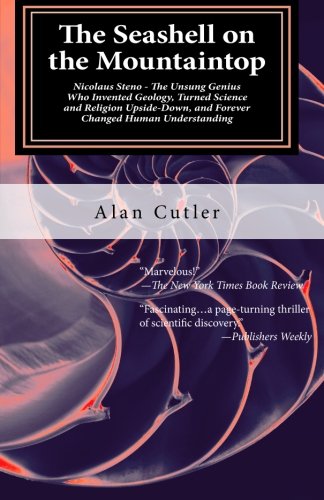 The Seashell on the Mountaintop is a 2003 book by Alan Cutler, published by Dutton/Penguin, about the seventeenth century scientist and bishop Nicholaus Steno. From the dust jacket:

It was an ancient puzzle that stymied history’s greatest minds: How did the fossils of seashells find their way far inland, sometimes high up into the mountains? Fossils only made sense in a world old enough to form them, and in the seventeenth century, few people could imagine such a thing. Texts no less authoritative than the Old Testament laid out very clearly the timescale of Earth’s past; in fact one Anglican archbishop went so far as to calculate the exact date of Creation…October 23, 4004, B.C.

A revolution was in the making, however, and it was started by the brilliant and enigmatic Nicholaus Steno, the man whom Stephen Jay Gould called “the founder of geology.” Steno explored beyond the pages of the Bible, looking directly at the clues left in the layers of the Earth. With his groundbreaking answer to the fossil question, Steno would not only confound the religious and scientific thinking of his own time, he would set the stage for the modern science that came after him. He would open the door to the concept of “deep time,” which imagined a world with a history of millions or billions of years. And at the very moment his expansive new ideas began to unravel the Bible’s authoritative claim as to the age of the Earth, Steno would enter the priesthood and rise to become a bishop, ultimately becoming venerated as a saint and beatified by the Catholic Church in 1988.

Combining a thrilling scientific investigation with world-altering history and the portrait of an extraordinary genius, The Seashell on the Mountaintop gives us new insight into the very old planet on which we live, revealing how we learned to read the story told to us by the Earth itself, written in rock and stone.

Seashells on mountaintops are no longer a mystery. The science of geology employs thousands of people in academia, government, and industry. In searching for oil and mapping the structure of bedrock, geologists use Steno’s principles every day. Students of geology quickly learn to take them for granted. Out of these seventeenth-century ideas grew the modern concept of deep time, not to mention plate tectonics, evolution, global climate change, and dinosaurs. It all would greatly surprise Steno.

What might seem surprising to us looking back at Steno today is his status as a figure of both scientific innovation and staunch religious piety. Despite De solido’s clear connection to the volatile issue of interpreting Scripture, Steno’s science was never criticized by his contemporaries on religious grounds. There is no evidence that the Church objected to anything Steno wrote, or pressured him in any way. Both the hyper-orthodox Cosimo de Medici and the progressive Leibniz encouraged Steno to continue his geological research.As for Steno, even at the height of his religious zeal, he never disowned his science, never showed any concern that it might infringe on his faith.