This column first appeared in The Tablet in May, 2011

This spring [2011], the Massachusetts Institute of Technology (MIT) celebrates its 150th anniversary. A breathless article in the Guardian reporting on the celebrations describes MIT as a place of “maverick genius,” contrasting its educational style combining theory and practice against the more stuffy Latin-and-Greek classical schooling found just up the river at Harvard. 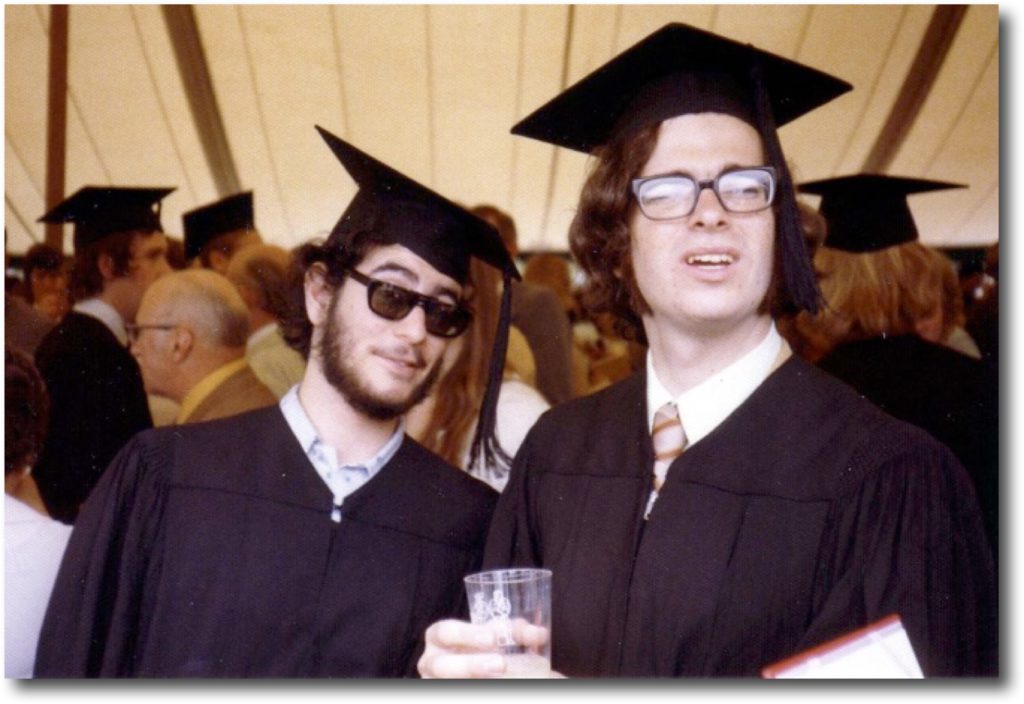 What MIT maverick geniuses looked like in 1974. I’m the one without the beard; with me is my roommate Paul Mailman. Credit my parents for taking, and holding onto, this photo. (Even my family can’t recognize me here!)

Forty [now 45!] years ago, I was a student at MIT. Thirty years ago, I taught there. Recently I visited it again with fellow graduates whose son is now a student there himself. It’s still the wonderful place I remember. And it is fun to pretend that we somehow live up to the status of “maverick geniuses.”

It’s not true, of course. For one thing, there is nothing inherently preferable to practical knowledge over classical. When I taught physics, I regularly saw that my best students were often those who had in fact also studied Latin or Greek; I myself did classics, not science, in high school. And for that matter, Bill Gates (Microsoft) and Mark Zuckerberg (Facebook) both went to Harvard, not MIT.

The fact is, we all need to learn how to at least appreciate both worlds. And we appreciate those in both worlds, who can. We’ve seen how embarrassing it is when scientists publicly (as happens in the Guardian) display their ignorance of philosophy, or when religious people misunderstand evolution.

But more importantly, science is not something done by mavericks. It is a social activity that only advances as a community.

The figure of the lone genius is a common cliché, of course. One theory dates this back to the way Einstein was popularized in the press during the 1920’s with the same vocabulary used for film stars or sports heros. (The press conference announcing Eddington’s 1919 observations supporting the Theory of Relativity was covered by a sports writer for the New York Times who happened to be in London for a golf tournament.) But even Einstein was no Einstein, at least not the Einstein of the popular imagination.

The real benefit of an MIT is not the education you get in its classrooms. That’s no different from Nairobi to Nagasaki; I’ve taught physics on three continents, and we all used the same textbooks. What makes tech-friendly schools like MIT special is the community that grows there.

These are places where students can feel comfortable enough to follow their curiosity without fighting negative social pressures. They can be inspired by role models, both professors and fellow students. The sociologist Harriet Zuckerman, cited in Nicholas Russell’s recent book Communicating Science, has suggested that what such a setting provides is not any specific technical know-how, but (in Russell’s words) “socialization into the cultural conventions of elite science.”

The stereotype of the antisocial nerd is deeply flawed, but there’s a kernel of truth to it. An essential role for an institution like MIT is to provide the place and space where science and engineering students can learn how to interact socially. They need it. Unlike philosophy or novel-writing, science and engineering is a vocation that is done in teams, not alone.

It’s a familiar pattern. Consider how the Church grew in the first century, as described this season in our daily readings from Acts. Yes, Paul’s genius was of inestimable value. But if Paul had stayed home making tents in Tarsus then someone else, maybe Apollo or Cephas, would have done the job. The Church was not Paul, it was the folks in Corinth and Ephesus and Antioch. Paul wrote the letters; but they practiced what he preached, and passed his words on to future generations. We hardly know the names of the people in those communities. They were never called “maverick geniuses” in the Guardian. But they were satisfied to call each other Christians.