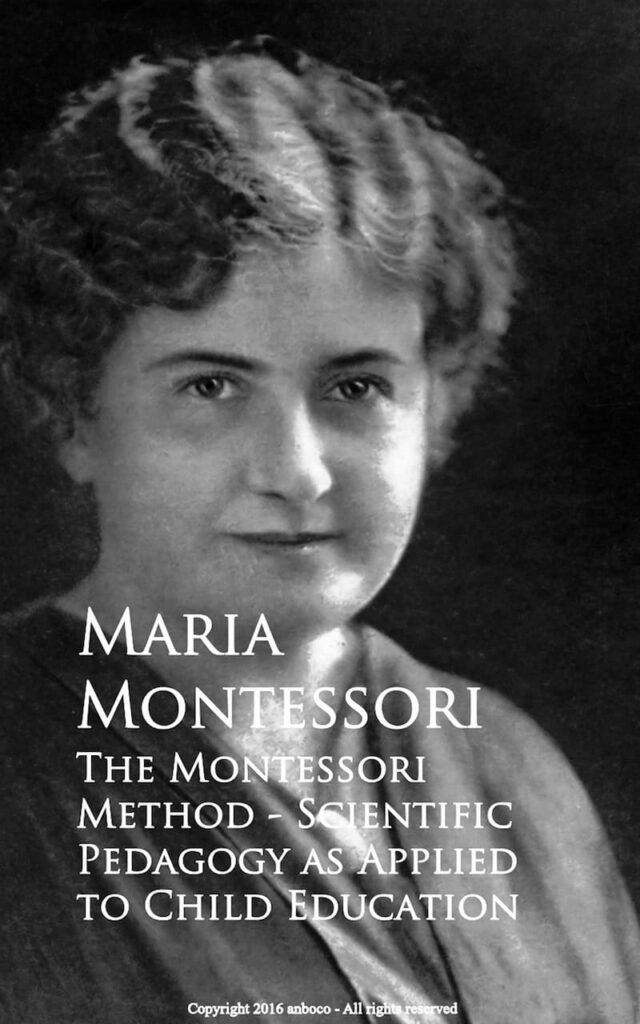 This book by Maria Montessori was originally published in Italian in 1909 and translated into English in 1912 under the title of Scientific Pedagogy as Applied to Child Education in the Children’s Houses (the “Children’s Houses” being education programs for children in the slum tenements of Rome, run under the direction of Montessori).  J. McV. Hunt, in a 1964 introduction to The Montessori Method, said that “Montessori was reforming pedagogy and basing her innovations on her own clinical observations of children”, as compared to American educators such as John Dewey, who was “attempting to foster social reform in schools… [based on] reformed Darwinism”.  According to Hunt, interest in Montessori’s work surged following publication of The Montessori Method, owing to her successes in Rome.  But then that interest rapidly waned, owing to the fact that Montessori’s work clashed with the increasing popularity of ideas such as the relative unimportance of school experience for three- and four-year-olds; fixed intelligence and predetermined development; behavior being primarily motivated by instincts and stimuli; among others.

[T]hey asked of Him, “Master, tell us who shall be greatest in the Kingdom of Heaven?” To which Christ, caressing the head of a little child who, with reverent, wondering eyes, looked into His face, replied, “Whosoever shall become as one of these little ones, he shall be greatest in the Kingdom of Heaven.” Now let us picture among those to whom these words were spoken, an ardent, worshipping soul, who takes them into his heart. With a mixture of respect and love, of sacred curiosity and of a desire to achieve this spiritual greatness, he sets himself to observe every manifestation of this little child. Even such an observer placed in a classroom filled with little children will not be the new educator whom we wish to form. But let us seek to implant in the soul the self-sacrificing spirit of the scientist with the reverent love of the disciple of Christ, and we shall have prepared the spirit of the teacher. From the child itself he will learn how to perfect himself as an educator.

And regarding the importance of observation in students:

The progress of positive science is based upon its observations and all its discoveries and their applications, which in the last century have so transformed our civic environment, were made by following the same line — that is, they have come through observation. We must therefore prepare the new generation for this attitude, which has become necessary in our modern civilised life. It is an indispensable means — man must be so armed if he is to continue efficaciously the work of our progress.

Montessori’s book does reflect in certain ways the attitudes of the times in which she wrote it, and at times refers to ideas no longer considered scientifically credible.  But Montessori writes as a person of great faith who believes that by setting aside our own preconceptions and studying the world around us, including our children, observing it for what it truly is, we will progress in knowledge through the use of science:

Every great cause is born from repeated failures and from imperfect achievements. When St. Francis of Assisi saw his Lord in a vision, and received from the Divine lips the command — “Francis, rebuild my Church!” — he believed that the Master spoke of the little church within which he knelt at that moment. And he immediately set about the task, carrying upon his shoulders the stones with which he meant to rebuild the fallen walls. It was not until later that he became aware of the fact that his mission was to renew the Catholic Church through the spirit of poverty. But the St. Francis who so ingenuously carried the stones, and the great reformer who so miraculously led the people to a triumph of the spirit, are one and the same person in different stages of development. So we, who work toward one great end, are members of one and the same body; and those who come after us will reach the goal only because there were those who believed and laboured before them. And, like St. Francis, we have believed that by carrying the hard and barren stones of the experimental laboratory to the old and crumbling walls of the school, we might rebuild it. We have looked upon the aids offered by the materialistic and mechanical sciences with the same hopefulness with which St. Francis looked upon the squares of granite, which he must carry upon his shoulders.

Click here for the 1912 edition of The Montessori Method, courtesy of Google Books.

Click here for a preview of the 1964 edition which includes J. McV. Hunt’s introduction, courtesy of Google Books.

From the V.O. Faith and Science Pages: What Maria Montessori Knew