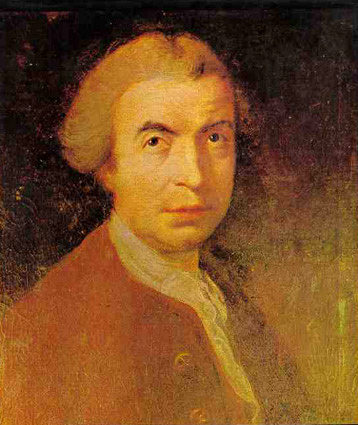 Ruđer Josip Bošković was born May 18, 1711 to a merchant family in Dubrovnik, in what is today Croatia.  He attended the Jesuit school in Dubrovnik. In 1725, he traveled to Rome to study at the Roman College, and in 1731 entered the Jesuit order. He was ordained a priest in 1744.

He showed aptitude for mathematics and the natural sciences, and from 1740-1759 served as a professor of mathematics at the Roman College.  It is during this time that he made many of his more significant scientific contributions.

In 1742, Pope Benedict XIV requested Boscovich’s input on a little problem. The dome of St. Peter’s Basilica was developing cracks.  Boscovich recommended securing the dome with iron bands, which was then implemented successfully. This led him to be consulted on other such projects.

Boscovich was well studied on the latest physics from contributors such as Isaac Newton, and promoted Newton’s works in continental Europe. He also successfully petitioned Benedict XIV to remove Copernicus’s works from the Index of forbidden books.

In 1759, the Jesuit superior general Lorenzo Ricci named Boscovich a Jesuit Visitor, for which he traveled to Paris and London. His visit to London also had a diplomatic dimension, serving as ambassador to ease tensions between the British government and his native Ragusa. In 1764 he became professor of mathematics at Pavia, near Milan. In 1765 he helped establish the observatory of Brera, and he became its first director in 1770.

In 1773, an event occurred that would deeply affect not only Roger Boscovich, but every Jesuit alive at the time.  Pope Clement XIV, bowing to political pressure from Portugal, Spain, and France, formally suppressed the order. (The suppression would not be lifted until 1814, many years after Boscovich’s death.)

At this time, Boscovich was invited by King Louis XV of France to relocate to Paris and become the director of optics for the French Navy.

In 1782, after some disputes with Laplace and other rivals over scientific priority, he left France and returned to Milan. He died there of lung disease on Feb 13, 1787.

Atomic Theory: While Boscovich’s early atomic models have been superseded by modern atomic theory, he was the first to develop a plausible scientific model for the theory of the atom.  Unlike many of his predecessors, he rejected the idea of the atom as an extended indivisible body. Instead, each atom was a point particle that interacted with other atoms though forces that acted at a distance. (Some have also called this a precursor to field theories.)

Interatomic forces varied in direction (attractive / repulsive) and strength at varying distances.  At larger distances, the force manifested as the gravitational attraction described by Newton. At close interatomic distances, at certain distances the force was attractive, allowing atoms to come together in coherent structures, but at closer distances it became repulsive again, preventing atoms from collapsing into one another. Repulsive forces between component atoms are also why extended bodies appear solid.

This work was published under the title Philosophiae naturalis theoria redacta ad unicam legem virium in natura existentium. (The Theory of Natural Philosophy derived to the Single Law of Forces which Exist in Nature.)

Celestial Mechanics: In 1746 he had developed a method for calculating the orbit of a comet from three observations of its position.

He developed a method for determining the equator of a rotating body from three observations of a given point on the surface.

His other contributions are many. He organized observations of the transits of Venus and Mercury. He measured gravity anomalies (variations in the strength of the local gravitational field) along the surface of the Earth. He developed ways of measuring the limits of telescope resolution. He studied aurorae.  He made improvements to the achromatic telescope and the ring micrometer. His mathematical contributions helped Legendre develop the principle of least squares. His contributions go on, but I haven’t had a chance to research them all.

There is a lunar crater named for him, as is the asteroid 14361 Boscovich.

I would like to single out Father Ruđer Josip Bošković…. He is a good illustration of the happy symbiosis of faith and scholarship, each stimulating the other through research that is at the same time open, diversified and capable of synthesis. … In Bošković, there is analysis, there is study of multiple branches of knowledge, but there is also a passion for unity. This is typical of Catholic culture. … The experts say that his theory of “continuity”, which holds true both in the natural sciences and in geometry, accords well with some of the great discoveries of modern physics. What are we to say? Let us pay tribute to the illustrious Croat, but also to the true Jesuit; let us pay tribute to the cultivator of truth who knows how far the truth surpasses him, but who also knows, in the light of truth, how to engage fully the resources of reason with which he has been endowed by God himself.