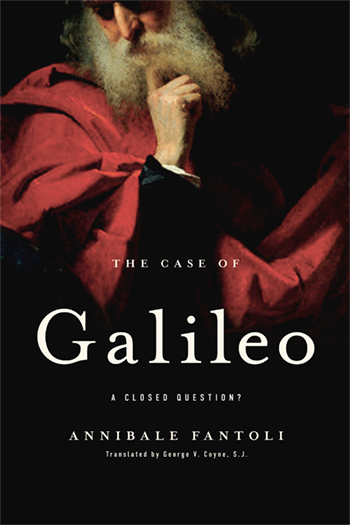 This book, written in Italian by Annibale Fantoli and translated into English by Fr. George Coyne, S. J. (Director of the Vatican Observatory from 1978 to 2006), is essentially a streamlined version of his more massive book, For Copernicanism and for the Church. From the website of the publisher, the University of Notre Dame Press:

The “Galileo Affair” has been the locus of various and opposing appraisals for centuries: some view it as an historical event emblematic of the obscurantism of the Catholic Church, opposed a priori to the progress of science; others consider it a tragic reciprocal misunderstanding between Galileo, an arrogant and troublesome defender of the Copernican theory, and his theologian adversaries, who were prisoners of a narrow interpretation of scripture. In The Case of Galileo: A Closed Question? Annibale Fantoli presents a wide range of scientific, philosophical, and theological factors that played an important role in Galileo’s trial, all set within the historical progression of Galileo’s writing and personal interactions with his contemporaries. Fantoli traces the growth in Galileo Galilei’s thought and actions as he embraced the new worldview presented in On the Revolutions of the Heavenly Spheres, the epoch-making work of the great Polish astronomer Nicolaus Copernicus.

Fantoli delivers a sophisticated analysis of the intellectual milieu of the day, describes the Catholic Church’s condemnation of Copernicanism (1616) and of Galileo (1633), and assesses the church’s slow acceptance of the Copernican worldview. Fantoli criticizes the 1992 treatment by Cardinal Poupard and Pope John Paul II of the reports of the Commission for the Study of the Galileo Case and concludes that the Galileo Affair, far from being a closed question, remains more than ever a challenge to the church as it confronts the wider and more complex intellectual and ethical problems posed by the contemporary progress of science and technology. In clear and accessible prose geared to a wide readership, Fantoli has distilled forty years of scholarly research into a fascinating recounting of one of the most famous cases in the history of science.