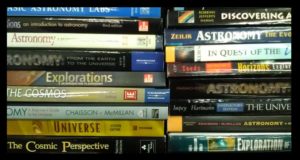 On occasion someone will ask a member of the staff of the Vatican Observatory to recommend a good astronomy textbook, with “good” meaning not simply that the book effectively conveys astronomical concepts, but that it does not go out of its way to portray science and faith as being in conflict or to make its reader feel that science requires the rejection of religious faith.

The listing below attempts to provide a limited overview of various textbooks from a “Faith and Science” perspective. The listed books were reviewed for their discussions of two key figures in the history of astronomy: Johannes Kepler (1571-1630) and Galileo Galilei (1564-1642). How books treat Kepler and Galileo is used here to gauge their treatments of matters of faith and science.

For more discussion of why Johannes Kepler and Galileo Galilei, click here. This discussion will be useful when reading the reviews.

But in brief, if a textbook treats the subject of faith and science, it will likely discuss Galileo. A solid discussion of Galileo will not state that Church officials refused to accept his discoveries. It will not suggest that Galileo proved that the Earth circles the sun. It will not portray opposition to the idea that Earth moves as having been simply religious in nature. It will portray the debate over Earth’s motion, and Galileo’s interaction with Church officials, as complex.

In addition, if a textbook treats the subject of faith and science, some discussion of Kepler’s faith can indicate effort on the part of the author or authors to look seriously at the subject. Kepler is a key figure in astronomy. His faith was a strong part of who he was. He wrote his faith directly into his scientific writings. His faith-filled view of a universe that reflected its creator influenced his astronomical ideas. A good text should tell enough about Kepler’s faith to enable the reader to have some sense of what motivated his ideas about the universe. Without that, books end up giving the reader little more than a nebulous statement that Kepler somehow figured it out by looking at data.

A book that makes no mention of Kepler’s faith, but goes on at length about religious opposition to Galileo, is probably relaying an inaccurate picture of faith and science.

Note that the listings below are not recommendations. Most books contain some errors; to err is human. Within some of the books below are obvious errors, such as stating that Galileo’s observations were “the first fundamentally new astronomical data in 2000 years”, despite Tycho Brahe’s data (which preceded Galileo’s observations) being what Kepler used to develop his laws of planetary motion; or stating about Tycho Brahe’s model of a sun that circles Earth while planets circle the sun, that “few people took this model seriously”; or stating that Galileo’s Sidereus Nuncius was written in Italian; or stating that one of Kepler’s laws of motion appeared in his early work Mysterium Cosmographicum, which he wrote prior to working with Tycho Brahe, and thus before he obtained the data that he used to develop his laws of motion; or even promoting studies of UFOs. The listings below, which are in alphabetical order by the last name of each book’s first author, are only about the discussions of Kepler and Galileo found within each book. The rest of the book may be good or not.

Finally, the reader may wonder why so many of the books reviewed tend to be from the 1980’s-2000’s. This is because this project was made possible thanks to the discovery in 2020 of a large collection of textbooks assembled over time by Dr. Les D. Burton of Louisville, Kentucky, whose career teaching astronomy spanned that time period.

If You Enjoy These Posts, You Will Enjoy This Book! God’s Canvas: An Exploration of Faith, Astronomy, and Creation.