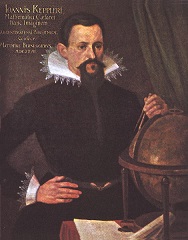 Kepler is the astronomer who first worked out the true nature of how planets move.  This is covered in virtually all astronomy textbooks.  What is generally not covered is how he worked this out.  Faith is part of that story.

Since the time of the ancient Greeks, astronomers had believed that the observed motions of planets through the constellations resulted from them moving around the Earth in perfect, steady circles, or some combination of circles.  This idea reached its peak in the work of the ancient astronomer Ptolemy, whose work was based on the ideas of the philosopher Aristotle.  In the early sixteenth century Nicolaus Copernicus proposed that Venus, Earth, Mars, etc. all revolve about the sun, but (a) he still assumed they moved in circular orbits and (b) the ancient Greek Aristarchus had proposed this idea nearly two thousand years earlier.  Kepler, by contrast, determined that planetary motion was the result of them all revolving around the sun in simple but elliptical orbits.  He made a conceptual breakthrough that no other astronomer had ever made.  Why?

Kepler worked with precise data on the positions of the planets gathered by Tycho Brahe, who had hired him as an assistant.  For example, using the circular motion idea, Kepler calculated the locations of Mars at certain times for various years from 1580 through 1604.  Then he compared the calculated locations to the actual locations observed by Tycho.  They did not match, even allowing for a reasonable margin of error.  Kepler’s conclusion was that a new theory was needed that would match the reality of the heavens revealed by Tycho:

It behoves us, to whom by divine benevolence such a very careful observer as Tycho Brahe has been given, in whose observations an error of 8′ of Ptolemy’s computation could be disclosed, to recognize this boon of God with thankful mind and use it by exerting ourselves in working out the true form of celestial motions….

When Kepler developed his ellipse theory, it worked perfectly, and it is still used by astronomers today.  But what led Kepler to think of elliptical orbits?

He actually tried a variety of oval orbits that would have worked quite well with Tycho’s observations, but he was not satisfied with just picking any shape that worked.  But when he noticed that elliptical orbits worked well if the sun was at a mathematical point within the ellipse called a focus, he latched on to that idea.  Kepler supposed that the sun was the cause of the motions of the planets.  Focus is the Latin word for “hearth”, as in a fireplace hearth.  For Kepler the sun was the hearth or focus of the universe.  Kepler, a deeply religious man who once wrote, “I wanted to become a theologian; for a long time I was restless: Now, however, observe how through my effort God is being celebrated through astronomy”, and who included lengthy praises to God within his books, also saw the sun as a symbol of God.  He argued that Aristotle’s ideas, in which the Earth was the center of celestial motions, divided the universe into two parts, the heavens and the Earth; but when the sun is the center of motion, “there are three regions, symbols of the three persons of the Holy Trinity”, noting “the beautiful correspondence of the immobile sun, fixed stars, and intermediate space [where the planets are] with God the Father, the Son, and the Holy Spirit”.  He even discussed the harmony of celestial motions as being a model for harmony within churches.  Kepler’s faith-filled, mystical view of the universe played a role in his revolutionary scientific ideas.* 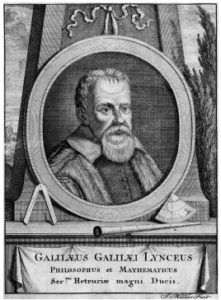 Galileo Galilei often comes to mind when the subject is faith and science.  His telescopic discoveries showed that many of Ptolemy’s ideas were wrong, forcing astronomers to make major changes in how they understood the universe.  However, those discoveries did not show that Copernicus was right about the Earth revolving around sun, because what Galileo saw through the telescope was compatible with a theory developed by Tycho, in which the sun circled the Earth while the planets circled the sun.  Furthermore, there were at the time several apparently very strong lines of scientific argument against Earth’s motion (later scientific discoveries would undermine them all).  Even though Galileo’s discoveries did not prove Copernicus right, Galileo strongly advocated for Copernicus’s ideas.  Since the Bible speaks of a moving sun—for example, describing it as rising and setting and rising again (Eccl. 1:5)—this advocacy became a matter of religious controversy.

Galileo’s conflict with officials in the Catholic Church is well-known, but that conflict was complex.  He had both supporters and opponents within the Church, and sometimes the same people were both supporters and opponents.  For example, Jesuit astronomers verified his discoveries with their own telescopes, but he also had conflict with prominent Jesuit astronomers.  Also, Pope Urban VIII was for a while a supporter, but later he personally worked for Galileo to be condemned, possibly because he thought Galileo had betrayed his support by insulting him within the pages of Galileo’s 1632 book, Dialogue Concerning the Two Chief World Systems: Ptolemaic and Copernican.

* The discussion in this paragraph is based on the following works of the Harvard astronomer and historian of science, Owen Gingerich: “The Great Martian Catastrophe and how Kepler fixed it”, Physics Today, Volume 64 (2011), pg. 50; “Kepler’s Trinitatian Cosmology”, Theology and Science, Volume 9 (2011), pg. 45; “Kepler as a Copernican”, Katalog zur Kepler-Austellung in Linz (1971), pg. 109 (the source of the three quotations used in the paragraph is pg. 111 of this work); “The Origins of Kepler’s Third Law” in Vistas in Astronomy volume 18, edited by A. Beer and P. Beer (Pergamon Press: Oxford, 1975), pg. 595.