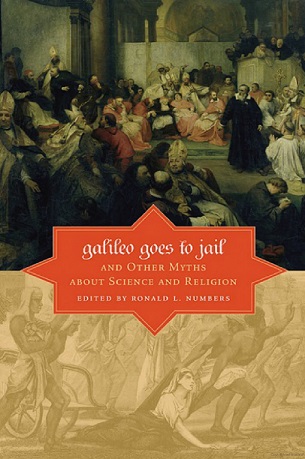 This 2009 book, edited by Ronald Numbers, contains much that will be of interest to many readers. From the publisher, Harvard University Press:

If we want nonscientists and opinion-makers in the press, the lab, and the pulpit to take a fresh look at the relationship between science and religion, Ronald L. Numbers suggests that we must first dispense with the hoary myths that have masqueraded too long as historical truths. Until about the 1970s, the dominant narrative in the history of science had long been that of science triumphant, and science at war with religion. But a new generation of historians both of science and of the church began to examine episodes in the history of science and religion through the values and knowledge of the actors themselves. Now Ronald Numbers has recruited the leading scholars in this new history of science to puncture the myths, from Galileo’s incarceration to Darwin’s deathbed conversion to Einstein’s belief in a personal God who “didn’t play dice with the universe.” The picture of science and religion at each other’s throats persists in mainstream media and scholarly journals, but each chapter in Galileo Goes to Jail shows how much we have to gain by seeing beyond the myths.