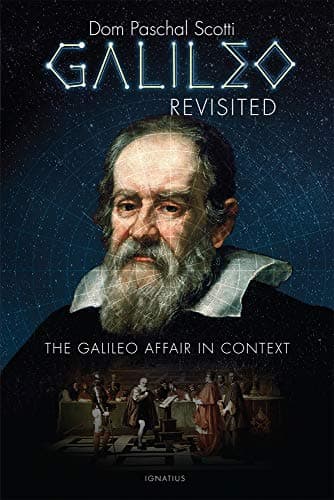 Fr. Paschal Scotti’s 2017 book Galileo Revisited offers another look at the Galileo story; a look in which there are no heroes and no villains; a look that makes a special effort to include the broad historical and cultural background in which that story took place. Fr. Scotti is a Benedictine monk at Portsmouth Abbey in Rhode Island, and teaches at his monastery’s school, Portsmouth Abbey School.

From the publisher, Ignatius Press:

No other work on Galileo Galilei has brought together such a complete description of the historical context in its political, cultural, philosophical, religious, scientific, and personal aspects as this volume has done. In addition to covering the whole of Galileo’s life, it focuses on those things that are most pertinent to the Galileo Affair, which culminated in his condemnation by the Inquisition in 1633.

This work shows the significance of astrology in the history of society and the Church (Galileo was a master astrologer), and the importance of the internal tensions and factions within the Roman Curia in the seventeenth century. It also tells of the profound battles among Church leadership over the direction of the Church in a time of uncertainty and intellectual and cultural ferment. The Galileo Affair is not just of its time and place, and it is not just about Galileo, but it touches upon that perennial issue of how the Church deals with issues of adaptation and change.