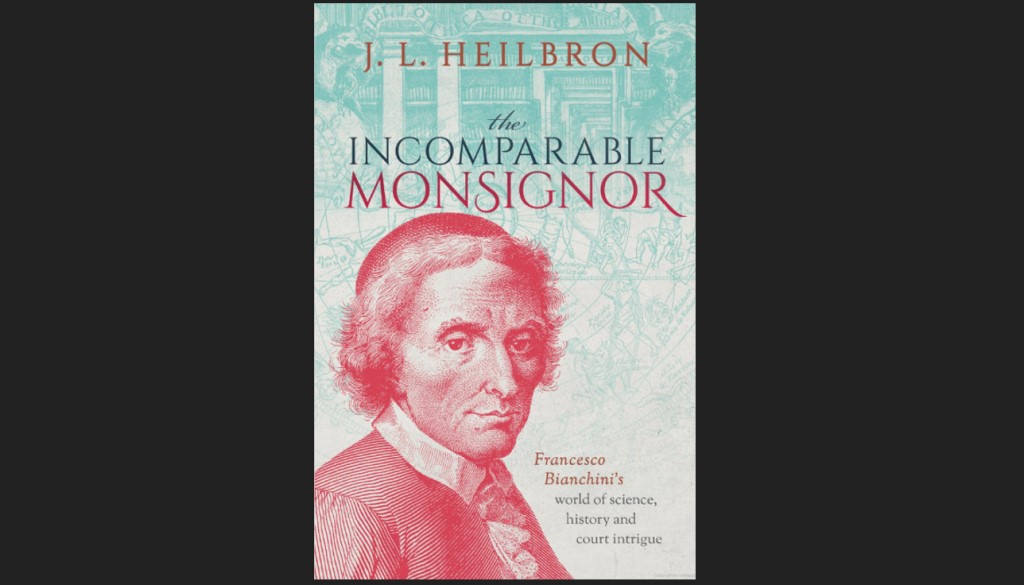 “Was there nothing Monsignor Bianchini could not do better than anyone else? [p. 227]” Apparently not. He did archaeology, history, diplomacy, spy craft, engineering, astronomy, and more. Historian J. L. Heilbron has written on Church history in his books on Galileo (2010) and on cathedrals as solar observatories (1999). The Incomparable Monsignor (published in 2022) is a readable, illustrated, informative addition to that work that portrays a Catholic man of many talents, supported by and on good terms with his Pope and his Church.

Through Francesco Bianchini, the ‘greatest Italian of his time’ this book explores the exciting meeting of science, history, and politics in early modern Europe.

Born in a time where entry into the church granted power, privilege, and access to the most exciting ideas of his time, the magnificent Monsignor Francesco Bianchini was an accomplished player in the political, scientific, and historical arenas of early modern Europe. Among his accomplishments were writing a universal history from the creation to the fall of Assyria; discovering, excavating, and interpreting ancient buildings; and designing a papal collection of antiquities that was later partially realized in the Vatican museums. He was also responsible for confirming and publicizing Newton’s theories of light and color; discovering several comets; and building the most beautiful and exact heliometer in the world in the basilica of Santa Maria degli Angeli in Rome.

Bianchini’s international reputation earned him election to the Académie royale des sciences of Paris and the Royal Society of London. As a trusted servant of Pope Clement XI, he helped to execute the difficult balancing act the papacy practiced during the War of the Spanish Succession, which pitted Britain, the Dutch Republic, and the Habsburg Empire against France and Spain. One of his assignments also resulted in attachment to the cause and person of the Old Pretender, James III, the Stuart claimant to the thrones of England, Scotland, and Ireland. Through the career of this eminent and adept diplomat, astronomer, archaeologist, and historian, J. L. Heilbron introduces a world of learning and discovery, Church and State, and politics and power.

Advancing our Understanding: Revelation and Science

From the V.O. Faith and Science Pages: John Henry Newman – on Darwin’s Theory of Evolution