And then I wrote… A couple of weeks ago (on April 2) I ran an article written for the International Year of Astronomy in 2009. This article also dates from that time; it was written for an “astroblog” set up by some IYA committee or another. No idea where it actually went up, but it’s a nice summary of where I was, scientifically, back in 2009… 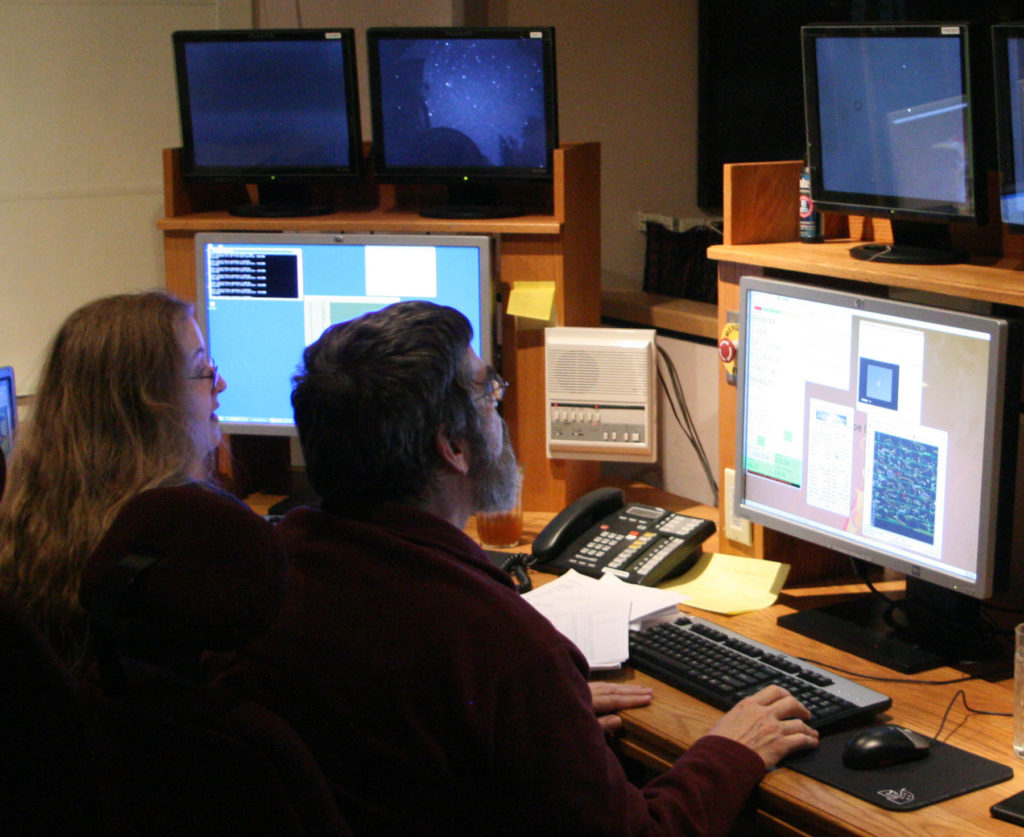 This photo of Melissa Brucker and me at the VATT controls dates from November 2008, about the time this article was written

I’m writing this from the control room of the Vatican Advanced Technology Telescope (VATT) on Mt. Graham, Arizona.

Observing Centaurs, the proto-comets whose orbits cross Neptune, Uranus, and Saturn, is our project for this run; it consists of five minutes of doing nothing while the camera takes an exposure of these small iceballs, followed by a brief flurry of activity when the next picture comes off our CCD camera… a faint smudge moving from image to image across a background of stars and distant galaxies.

Behind me, Bill Romanishin from the University of Oklahoma is inspecting the images coming across the computer screen, while Steve Tegler from Northern Arizona University is keeping himself busy grading papers until the next time we need to tweak the focus or move to another field of stars.

My work here is not so much different from observers around the world on any given night… except that this really isn’t my work at all. My real field of expertise is not Centaurs; or even using a telescope. I am a meteoriticist. My real work takes place in a laboratory five thousand miles away from this Arizona mountaintop, in the Pope’s summer home of Castel Gandolfo, Italy, where the Vatican’s meteorite collection is housed. In that lab I measure the physical properties of those rocks from the asteroid belt – density, porosity, magnetic properties. So why am I at a telescope?

In fact, I started out as a theorist. I wanted to use the physics and chemistry…

…of small solar system bodies to make computer models that could match what we actually see in the small moons around the gas giant planets, or the asteroids that orbit between Jupiter and Mars. I had assumed that meteorites were good analogues for the material that made up those small bodies, but it was hard to find data for the physical properties of the meteorites. When I was assigned to the Vatican Observatory in 1993, and got to see the wonderful collection of meteorites (donated to the Vatican by a French nobleman seventy years earlier), I worked out a rapid, non-destructive way to get the data I needed from these samples.

A portrait of a telescope: the VATT

But the Vatican Observatory supports more than a meteorite lab and a set of offices outside Rome; it also has a telescope in the mountains outside Tucson. For the past fifteen years, the VATT has served as the testbed for the new technology now going into the twin 8.4 meter mirrors of the Large Binocular Telescope, our neighbor here on Mt. Graham. The VATT saw its first starlight in 1993, by coincidence my first summer at the Vatican Observatory. And over the next fifteen years a number of advances in planetary astronomy in a wide variety of areas conspired to bring me to this telescope this evening. 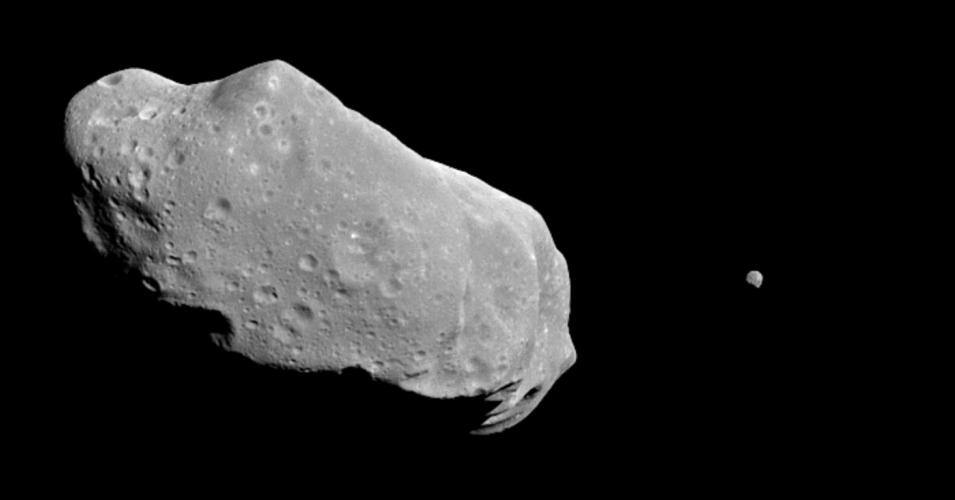 Asteroid Ida (and its little moon Dactyl), as imaged by NASA’s Galileo spacecraft on its way to Jupiter, gave us our first good measurement of asteroid mass and volume.

In one sense, you can blame it on Galileo. Not only the man who invented the telescope (and whose problems with the Church eventually led it to found an astronomical observatory, in a sort of quiet apology for those problems). But it was the Galileo spacecraft that passed by asteroid Ida on its way to Jupiter in the early 1990s and discovered a moon orbiting that asteroid. By seeing how fast the moon moves around the asteroid, we could calculate how massive the asteroid pulling on it must be. Thus it became the first asteroid for which a mass and density could be measured. Since then, other techniques from radar echos to adaptive optics on the largest telescopes have led to the discovery of dozens more moons around asteroids. (And the asteroids themselves can pull on passing spacecraft, allowing us to measure their mass that way.)

Once you know the mass of an asteroid, you can divide that mass by the asteroid’s volume to get its average density. And our meteorite densities turned out to be systematically 20% to 50% larger than the densities of the asteroids from which they come; asteroid volumes are 20% to 50% empty space! The asteroids are not solid rocks but rather highly fractured — and porous — piles of rubble.

Meanwhile, during this same time, a whole new belt of asteroid-like objects was discovered orbiting out beyond Neptune: the Kuiper belt. This apparently is the source for many of the comets we see. Are comets and Kuiper Belt bodies also made largely of empty space? 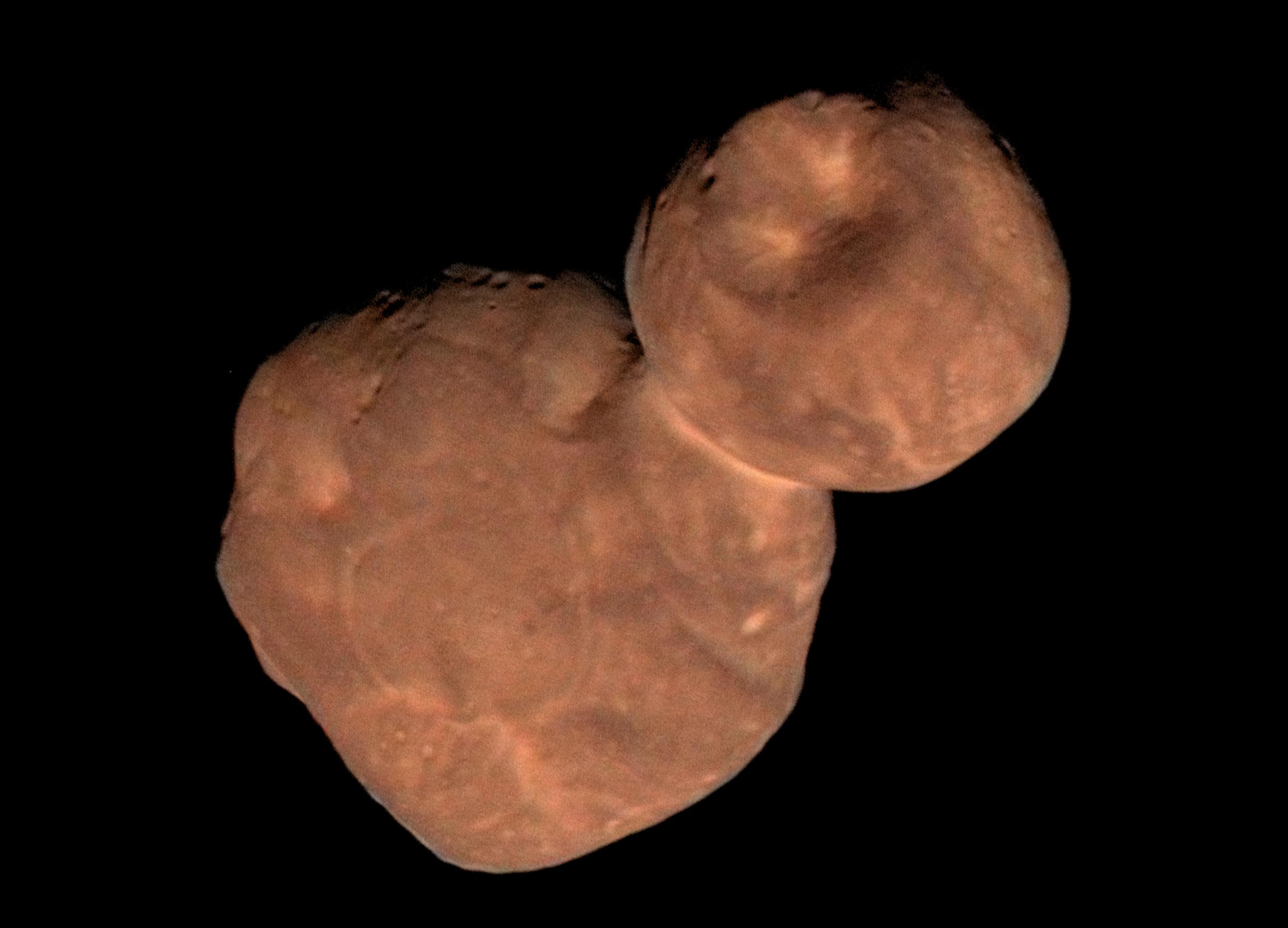 In 2019, the NASA New Horizons spacecraft gave us our first good image of a Kuiper Belt Object, Arrokoth

That’s hard to tell. It’s not only that they are so much further away from us than the asteroids, but, unlike the asteroids, we don’t have samples of comets in our lab to measure. So how can we tell what they are made of? By comparing their detailed colors with the spectra of different materials in our lab. That’s one reason I observed them with the telescope in Arizona, to measure their colors and guess their composition.

There is a trick, however, that can let us make an intelligent guess at their average densities. If a body is not a single solid object but a very weak pile of rubble, then the faster it spins, the more its spin should pull it into an elongated shape. What holds such a body together against that spin is its gravity, which depends on its average density. So for a given spin rate, the more elongated it is, the lower its density must be.

If we can measure how fast a body spins, and how elongated it is, we should be able to estimate its density.  By seeing how the brightness changes as it spins, we can compute not only how fast it is spinning but — from the difference between the brightest and the dimmest phases — how non-spherical it is. To get a complete shape requires observing this “lightcurve” at many different positions in the body’s orbit around the sun.

And that’s what we’re working on tonight. We choose Centaurs, bodies perturbed out of the Kuiper belt, because as they approach the Sun, we get to see them at many different aspects in their orbits. It would take hundreds of years to get the same range of aspects for the bodies out in the Kuiper belt itself. Even for Centaurs, however, we need lightcurve data taken over many decades. Tonight’s data will be one more piece of evidence that may some day allow us to understand just how these distant objects are put together.

And then, ultimately, we can compared the structure of the asteroids from which my meteorites come, with the structure of the bodies from which comets come. Then, just maybe, out of that data we’ll have new insights into the physical processes of how all those bodies – asteroids, meteorites, comets – were formed back when the solar system itself was formed, four and a half billion years ago.