And then I wrote… Ten years ago, blogs were all the rage, and one in particular that found me (soon after I had published God’s Mechanics) was a book-review site in the UK called Vulpis Libris — “Book Fox” for the Latin-challenged. The blog site moved to a Facebook page in 2017, and since I don’t do Facebook I have no idea what it’s up to anymore. But as it was about books, and I had written a book, they reached out for what turned out to be a lengthy interview. They ran it in two pieces, so that’s how I will run it here. The Interviewer was Kirsty McCluskey, who has gone on to become a respected and widely published journalist (under a number of different names…)

The Book Foxes use this image to identify themselves…

Which questions do you most often hear when you do science outreach?

“Would you baptize an extraterrestrial?” I have tried being funny (“only if they ask”) and tried being serious. (I wrote a chapter about it in my book Brother Astronomer and a booklet for the British Catholic Truth Society, mostly saying “we don’t know” in as many different ways as I could think.) But obviously nobody ever listens because they keep asking the question anyway and treating the answer as if it were news.

Have you noticed an evolution (ahem) in public perceptions of the relationship between science and religion in the course of your academic life?

I can see two different, and in some ways contradictory, changes in the atmosphere around science and religion over the years I have been involved in both. To appreciate these, you have to remember where I am coming from…

I was taught science by the Sisters of Charity in my Catholic grade school. They taught us evolution and the Big Bang. They also taught us the standard American credo of the 1950s, which after all was the culture they were brought up in, where “science” and “technology” were all mixed together; where “science” had won the war (that’s World War 2, the only war that mattered); and no disease existed that wouldn’t some day be conquered by bigger and better factories and power plants. In those days, science was pretty much an unalloyed good, the key to the future well-being of the human race. 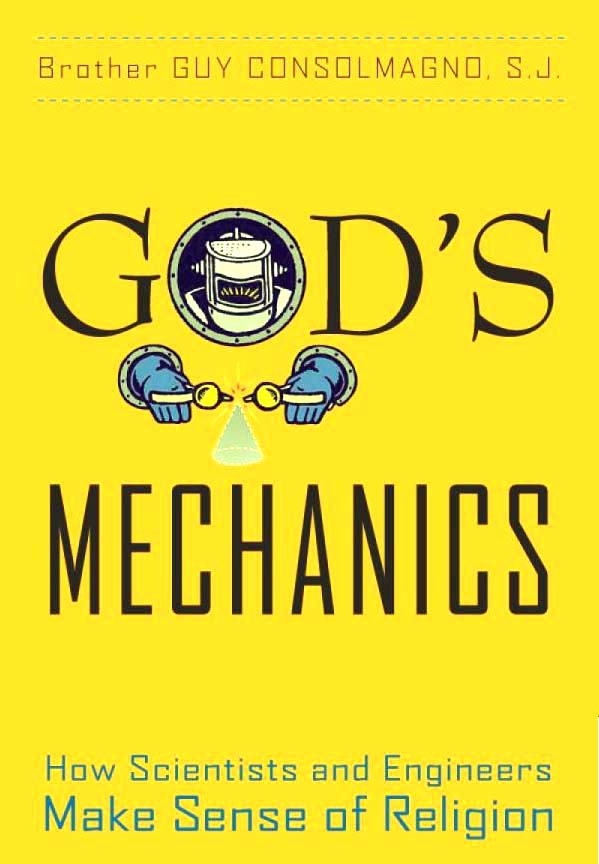 The cover to my 2008 book about techies

At the same time, however, they also emphasized the importance of a Catholic education… of avoiding the “dangers” of secular universities, for instance. There was still a sense of living in a Catholic ghetto, where the rest of the world was not to be trusted.

Likewise, among scientists of that era, there was either a complete reticence about letting anyone know one’s religion, or at least a tendency to imply that if anyone did go to a church it was merely for the sake of his wife – after all, this was an era when scientists were expected to be male, while religion was more a woman’s role.

As a part of this attitude, I noticed when I first arrived at the Vatican Observatory 20 years ago that among the older Jesuits there was still a defensiveness in the way they presented themselves and their science in public. They felt a need to explicitly emphasize the complete lack of any kind of religious influence on the science they did.

Then, coming first as a hint in the 1960s and then more and more in the 1970s as the battle lines of the culture wars were drawn, religious people became more suspicious of science – or, at least, of scientists. Still, this wasn’t (and isn’t) a rejection of science per se. I mean, if someone goes to the trouble of writing journals and books and even opening museums dedicated to what they call “creation science” then obviously they want to capture the cachet of that word “science” and all it implies in our culture, and appropriate it to their own beliefs. They want to think that their religion is “scientific” because they feel somehow that “scientific” means good, and smart, and reliable, and true… even while, at the same time, they reject what they have heard scientists on TV talk shows saying about what science teaches.

And so today it has become a badge of honor among many religious folks to say “I reject evolution” not because they reject “science” but as a short-hand way of saying they are “religious.” They think the one implies the other. (In the same way, one finds people who say “I reject religion” as a short-hand way of saying they are “scientific” because they think that implies they are allied with a worldview that the common culture says is smart and reliable and true… even while, at the same time, a strict materialism like they claim to espouse would not admit the reality of “smartness” or even, in its extreme versions like deconstructionism, of truth.)

Ironically, the religion that the science-rejecters actually practice would have been unrecognizable as “religious” even fifty years ago. Many of these same people who want to be identified with “traditional morality” have no problem with divorce and remarriage or even sex outside marriage – just see the attitudes they have towards the peccadillos of their favorite preachers and politicians (to say nothing of how they behave in their own personal lives). That kind of attitude would have been anathema among the conservative religious people of the 1950s and 1960s. Likewise, many of them have a rather relaxed attitude toward faithfulness to their particular church, a sort of “all churches are the same” attitude that lets them choose what church they attend based on issues that nothing to do with doctrine. Many behave as if they have no concept of the traditional Christian teaching concerning the care for for widows or orphans, and strangers in our midst, or the injunctions against piling up huge amounts of personal wealth.

My point here is not to shame them for these attitudes; I merely want to notice that what is treated as a sign of “religious faithfulness” today has changed a lot in the last 50 years. And there’s no reason to think it won’t continue to change as our culture changes.

Meanwhile, among the scientists themselves of my acquaintance, especially among the younger generation in the US – less so in Britain – there is a real opposite trend: an openness to people of all religious beliefs coupled with an acceptance that science doesn’t have all the answers, or even all the questions. Indeed, they are much more likely than the naive religious folks to recognize the limits of science. After all, they live with those limits every day.

In that sense, even if (sometimes, especially if) they themselves are non-believers, a lot of younger scientists feel the same embarrassment towards the so-called “new” atheists (who are, after all, mostly a bunch of old white men) that most religious people feel towards religious fundamentalists. They see the evangelical atheists as trapped in a sort of 19th-century understanding of science and religion that does not connect with their own experience of either, and which is seen to be very narrow minded, and dangerously bigoted.

I am in the very happy position of being someone who is accepted by both the religious folks and the scientists, even if they disagree with one or another aspect of my beliefs. With my bad haircut and MIT ring I am accepted by most of my fellow techies as one of them – rightly so. I am a nerd and proud of it. And yet even the religious fundamentalists are happy to meet a scientist who they can accept as someone who’s not trying to undermine their faith.

Of course what often happens is that many of these people assume I agree with them on various controversies, on either the right or the left, secular and religious. I try to keep my opinions to myself on these issues; no reason why anyone should listen to me, anyway!

I am fascinated to hear your experience of the science/religion divide.  It’s a bit different from mine in the sense that in my (limited and specific!) experience, the early-career academics of my generation often seem to assume that if you’re intelligent, you simply must be atheist.  (I tend to think the complexities of academic research haven’t beaten the certainty out of them yet).

Yes, it’s important to note that I am mostly reflecting on my experience in the US. The role of religion in UK society is quite different. I would guess that (pulling these numbers out of nowhere) something a little bit less than half of the scientists I’ve met have that attitude you talk about. But in the US, at least in the urban and better-educated parts of the country where most scientists live and work, there is a strong social pressure for tolerance and acceptance of diversity, and so people tend to keep their religious opinions to themselves. We’re more likely to know our fellow co-workers’ political or sexual preferences than their religion.

When religion does come up in casual conversation among techies in the US, it is more likely to be on the order of “this is how our church does such things; how interesting to hear how yours does it” rather than any kind of strident, “I’m right, you’re wrong” argument… even if that is what is going on in the back of our minds, sometimes!

I think a big part of the difference between the US and the UK is the presence of an established religion. It seems to me (seeing the case in both the UK and in Italy) that having a common religion that everyone assumes is the default state, doesn’t do that religion any good. Religion winds up getting identified with the established order, for better and for worse. My own preference is that religion should stand outside the established order to critique it – and, in turn, be critiqued by it. No human institution is perfect, and we all need to constantly have more than one way of looking at things.

In God’s Mechanics, you explain frankly why you are Catholic – and why you remain Catholic.  I’d like to ask: why did you choose the Society of Jesus?

Well, because they’re the best, of course!

Actually, I knew the Jesuits well from having gone to a Jesuit high school (University of Detroit High) and Boston College; I had actually thought of entering when I was 18, but put it off to do science (and read science fiction) at MIT instead. I was already a PhD and professor of physics when I finally did enter the Jesuits, and I expected to teach at a Jesuit university. But instead, they ordered me to live in Rome and play with meteorites. Of course I had to obey!