I went to Bucharest in November to celebrate Christmas (you read that right), and in December received an unwelcome answer to a Christmas wish. Be careful what you wish for! 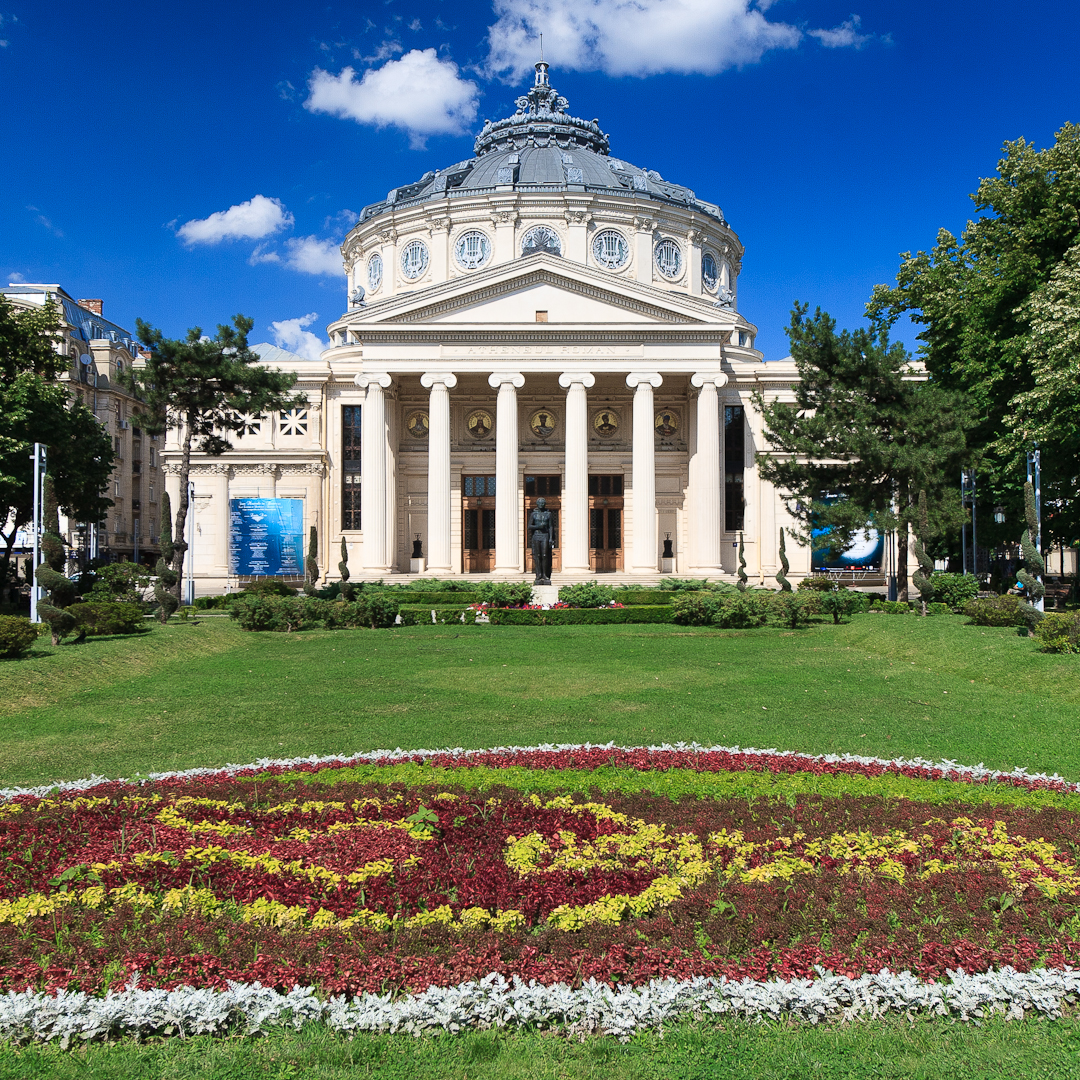 The Romanian Athanaeum, in sunnier days than when I was there (credit: Wikipedia)

But first…our stats this month: Last month we had 145 paid subscribers; this month it is only 141. (Annual subscriptions run out, credit cards expire… but still, we’re going backwards. This Is Not Good.) Our total roll call of those who get notified of new postings is 9477, about 100 more than last month.

You know, if we had five times as many subscribers, then this site alone would be able to cover the annual costs of the Foundation. (Hint, hint.)

Please, tell more people about our site; and if you can, please subscribe at a rate of $10 a month (about the cost of a burger and fries) or $100 per year. Or even consider signing up a friend or two, as a Christmas gift!

Meanwhile, read on to find out how I discovered an old professor of mine at Boston College was a national hero in Romania, and details (bordering on TMI) about my personal green slime…

Bucharest: Last month I flew to Bucharest to present the Romanian Academy’s annual Christmas Lecture. In November. I never did quite get the logic as to why they hold this lecture so long before Christmas. (It has nothing to do with the Orthodox calendar; the Romanians celebrate on December 25, while other Orthodox churches like the Russians follow the Julian calendar which puts it on the Gregorian calendar’s January 7.)

I confess I knew little about Romania beyond what I had read over the years in the times it’s been in the news — usually unhappy news, as that’s what tends to be newsworthy. So my top three surprises were these…

This is a 16th-century Orthodox monastery in the center of Bucharest, with an example of the French inspired buildings behind it.

First of my surprises: The Romanian language sounds a whole lot like a dialect of Italian. When the flight attendants gave their spiels on the airplane I was surprised at first that I couldn’t quite follow them; I didn’t think my Italian was that bad. It took me a minute to realize that they weren’t speaking Italian, but Romanian. The language developed from Latin, after all… the Romans were here, of course; where did I think the name of the country came from in the first place? To my not-so-great Italian ears I kept thinking I should understand it, but only just kept missing something.

Second: The city of Bucharest is called Little Paris for a reason. It was built, in somewhat of a hurry, to be the capitol of a new nation formed in 1859 from the unification of Moldavia and Wallachia (Transylvania joined after World War I). They brought in French architects, who among other things built their own Arcul de Triumf (a small version of the Arc de Triomphe). But of course after the war, the Communists did their usual trick of building hideous cement skyscrapers (which did at least give homes to the post-war population boom) — along with an excellent Metro system. So a typical cityscape is a mixture of lovely French 19-century buildings in front of less than lovely cement tenements. Since the return of democracy, the locals have taken to painting these cement towers in fascinating colors.

Third: Romania was developed in the Communist era as a center of science and engineering. As a result, they had one of the first nuclear reactors outside of the Soviet Union, and a long tradition of heavy duty engineering. That has continued today with the development of one of the major super-laser centers within the EU.

It’s one of three super-lasers being built in Europe, this one designed to do nuclear physics by ripping stuff apart, I guess. The rated power is to be ten peta-watts.

I got a tour of the place while I was there; it felt like visiting Fermilab or CERN. Very impressive engineering, which should lead to some very impressive science when it goes online in 2020.

Before going there, though, I also had the honor of seeing the historic observatory within Bucharest itself. Its vintage 1909 telescope looks like the big brother of our Carte du Ciel telescope; no surprise, both were made in France at about that time. The history comes from the fact that the telescope was built on the grounds of a palace where the future king stayed while the negotiations were taking place in 1859 leading to the formation of modern Romania. The palace now serves as the library for the observatory. They had a copy of the Jupiter book where my very first paper was published (historic itself, I guess!)

A personal surprise came to me, when I casually mentioned to one of my Romanian hosts that I had had a Romanian history professor back in my year at Boston College. (I was a freshman history major there before transferring to MIT in 1971.) A guy named Radu Flourescu. Turns out, he’s famous in Romania!

The year that I was taking intro to European history from him, the 1970/1971 academic year, was the year that he and McNally first published their famous book “In Search of Dracula” which first identified the Dracula character with the historic king known as Vlad the Impaler.

Oddly, the internet gives a date of 1972 for this work, and it has him appearing on “The Tonight Show with Johnny Carson” in October, 1973. But I distinctly remember him and his co-author Ray McNally talking about this book on Johnny Carson while I was taking that class, which could not have been later than spring of 1971. (It’s not the sort of event one would forget.) We insisted that he spend a class lecture telling us about this material; he was reluctant to spend time away from the syllabus.

His fame in Romania resulted not only from his Dracula work, but his family’s involvement in Romanian politics. His father had been an anti-Nazi diplomat in London who fled the country when the pro-fascists came into power; Radu was educated at Oxford, and came to the US after the war. Once the Communists fell, Radu acted as a consul for Romania in Boston and had a number of political contacts in Washington who promoted student and cultural exchanges.

The topic I presented was “Discarded Worlds — Astronomical Ideas that were Almost Correct.” Though I have used that title for a number of talks, this was a largely revised version, the basic thesis being that we progress through not being afraid to make mistakes, or to acknowledge those mistakes; and that, more often than not, our mistakes come not from errors in calculation but timidity in asking the right questions.

The venue for the talk was the Bucharest Athanaeum, a spectacular venue with remarkable acoustics (it’s used for musical events) and indeed the talk began with a half-hour musical interlude. I am told that one of the princesses of the (former) royal family was in attendance; I did not get to meet her, alas. I had a good time, and I assume the audience did, as well.

One final twist… the director of the Athanaeum is himself a historian; not only did he know my old Boston College professor (who died in 2014), he had also just recently been in touch with his son!

I returned to Rome and got into the swing of Christmas celebrations here. We have a number of events on our calendar, starting with delivering gifts to the local Old Folk’s Home run by the Little Sisters of the Poor (Fr. Mueller says Mass for them on Sundays), a big party for all the folks who work here in the Papal Gardens, a dinner for our staff, and then the big trip into Rome for the Papal Audiences.

Following the party for the Gardens folks, I was feeling exhausted, and mentioned out loud, “well, only two more events to get through.” As any of you who know me will know, I am not at my best in party situations; I find them nerve-wracking and exhausting.

Still, I know they are important and wonderful times; so I insist it was not wishful thinking that led me to wake up the next morning with a voice reminiscent of a bullfrog, and the attendant green slime that showed me I’d come back down with bronchitis. (I had exactly the same symptoms last June, which made me cut short my travels then.)

I missed the dinner. I missed the Papal Audience. It’s now day four of antibiotics, and I can speak again, but I am still praying that I’ll be back to better health come Christmas itself.

So let me end there, with a wish of good health to all, and a Merry Christmas to everyone!