I do two different kinds of “subscriber only” posts nowadays. The “And then I wrote“ articles that come out on Thursday mornings are little bonuses to thank the people who subscribe. The other kind are diaries like this one, kept behind the firewall since that material is often “inside baseball” kind of stuff, or my own personal diary/blog, which would not be of interest to most people… just those friends of mine who are already interested enough to sign up.

One thing I have been doing this month is going through my photo collection and publishing one a day on Twitter (@specolations) as part of Ada Palmer’s #SomethingBeautiful hashtag. This one I took while attending the Jesuit General Congregation in Rome in October 2016.

Of course, being a subscriber also gives you the chance to comment on what you read here. Sometimes people try to comment about our different articles by posting replies to Twitter. That doesn’t work, though, since most of the authors will never see what they had to say. In order for the author to read and reply, you need to sign in and comment in the comment section on this site!

Lately, there have been people who subscribed but then never activate their passwords. The problem may be on our end, with the software that is supposed to connect with you once you sign up. You should be getting an automatic email, with a temporary password, when you sign up; if it doesn’t arrive within 24 hours, check your spam filter and if there isn’t anything there, write to us directly via the “Contact Us” button at the top of this page.

Also, as an inducement to our regular users, this month there is a free give-away that I will describe behind the paywall…

Which reminds me; our stats: As of today, we have 168 paid subscribers (four new subscribers since the last diary—thanks and welcome!) and 10,147 people (more than a hundred since last month!) who get notified of new postings. We continue to grow, but not nearly fast enough to keep us in business. Please tell more people about our site. And if you can, please subscribe at a rate of $10 a month (still safer than going out to get donuts, at least for your waistline, even if your state is opening up now) or $100 per year. And tell your friends about the site!

And now for more details about the passing of one supporter, the opening of the telescope, talks available on line, and some timeless (i.e. hoary) puns… and of course the freebie I promised above.

News of the past month: Again I start with sad news: one of our most faithful supporters, Anne Benninghoff of Ann Arbor, Michigan, has passed away. We only heard about it a month after it happened (in early April) and her online obituary has very few details. She was the classic little-old-lady, full of enthusiasm, who came to all my talks in Michigan or Chicago, and filled my mailbox with clippings about meteorites and Antarctica, two passions we shared. I will miss her greatly.

As for little-old-ladydom: back in my pre-Jesuit MIT days, I dated a Wellesley student who once shared a cartoon of two such little old ladies drinking tea and gossiping, and she joked that she hoped that someday that would be her and her friend from campus. That seemed unspeakably far into the future at that time… more years ago, now, that I care to confess. I hope they’ve made it! 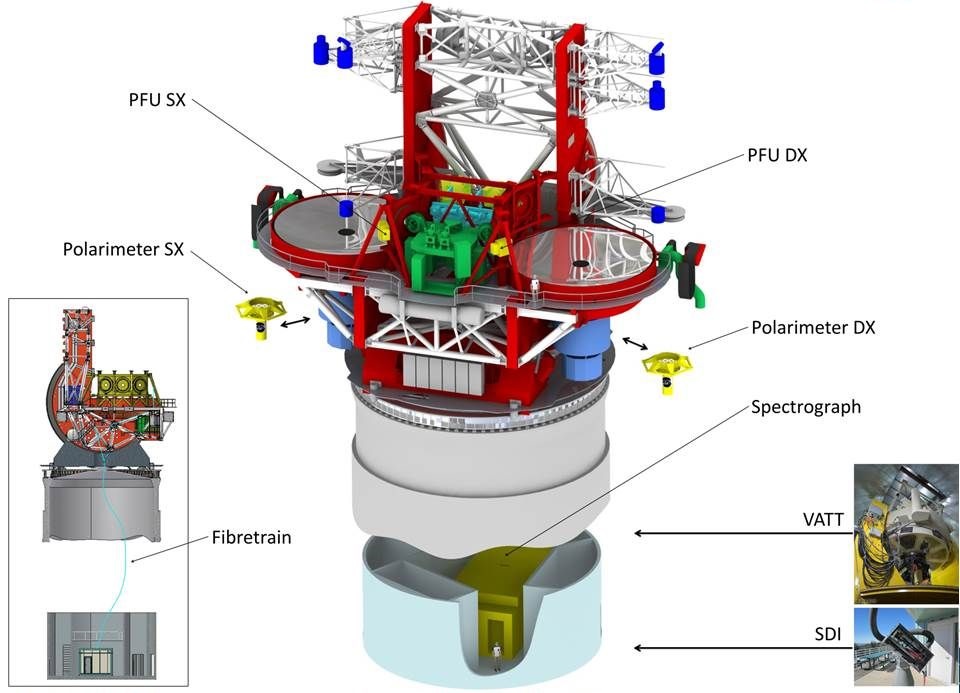 The Potsdam Echelle Polarimetric and Spectroscopic Instrument lives in the basement of the Large Binocular Telescope dome but it can be connected via fiber optic cable to the VATT.

The Vatican Advanced Technology Telescope may be back in operation soon. During the shutdown in Arizona, all the telescopes were shut down as well. But with the state, and the University, opening up it looks like we may have an operating telescope by the end of the month as well.

As you know, the telescope time is assigned several months in advance, and so the people who had time for late May and all of June would be the ones to be able to get some photons; there’s no point in giving time to people who lost it in March or April, since the objects they wanted to observe may be below the horizon by now. Stars and tides wait for no astronomers. The group slated to use the telescope at this time is the PEPSI project: the Potsdam Echelle Polarimetric and Spectroscopic Instrument. They use it to find and characterize exoplanets.

Like many of us, I have wound up doing more Zoom and Skype calls that I care to think about, including a lot of them with friends I haven’t seen in in person for quite a while. While speaking to a bunch who date back to my high school days in Detroit, I mentioned out loud that, since we’ve stopped giving public talks, as a result we have a couple of boxes of 2020 calendars left over that I would love to distribute. They are still available at $25 each from our web site, but for subscribers to this site, and considering that the year is already a third gone, if you want them for free (not free to us, of course, it costs $2 each to mail them out, but free to you) just send me an email with your address. Most of you probably know my email; if not, use gjc@as.arizona.edu

Note that I mail them just by dropping them one by one into a mailbox, as I am still trying to avoid social contact; so I wind up mailing each calendar in its own envelope, with stamps attached. And I am fulfilling each of these myself, by hand, so if there’s a big number of orders (which would be great!) please be patient.

Incidentally, I am also giving talks and interviews remotely. Here’s a link to one at the Catholic Theological Union in Chicago, whose conference I was supposed to keynote got canceled but my talk on Astronomy, Religion, and the Art of Storytelling was recorded and posted instead. Another, shorter presentation about where to look for life in the universe was already linked to on this blog earlier this month.

Other than mailing off calendars (which I do early in the morning; the walk to the mailbox and back takes me half an hour, and the weather lately has been on occasion over 100°F during the day so I try to get out not too long after sunrise when it is cooler outside) I’ve been busy with a few other projects. I am working up a book proposal with a good friend and colleague. I am co-editing a book of essays on the scientific work of Angelo Secchi, which Springer hopes to have in print by the end of the year; this in particular is fun because most of the authors are Italian so I get to translate their English into my English. And I’m co-author on a paper about the thermal behavior of carbonaceous chondrites that has passed through the referees and needs revision before it can be published.

Other than that, I live up to the old adage: “A Jesuit is someone who gets up at 5 o’clock. Twice a day.” I do like my afternoon naps.