I’m not the only guy to use the microscope in my meteorite lab; this chemist from Argentina brought his own white lab coat…

The year 2009 marked the 400th anniversary of Galileo’s telescope, and there were a number of articles and publications in its honor. This one I wrote for a special publication in the US in honor of the International Year of Astronomy… and as an extra treat, it includes yet another funny story about the big gas spectra tube at the U of Arizona Lunar Lab that I wrote about last month in our “Stupid Astronomer” series…

In my astronomical work, I use a microscope as much as a telescope. Though I do spend time every year observing at the Vatican Advanced Technology Telescope in southern Arizona, the majority of my time is spent in a laboratory in the gardens of the Pope’s summer home outside Rome, measuring the physical properties of meteorites.

Nowadays almost all of our ability to explore the universe, using the light gathered by telescopes, depends on work done here on Earth in laboratories like those here at the Vatican Observatory. The most obvious use of laboratory data in telescope astronomy…

…is taking spectra of elements and compounds to compare against what we see in the spectra of stars and planets. In fact, the Vatican Observatory was a pioneer of this sort of work. From 1935 until the late 1970s, a large spectra lab operated on the first floor of the Pope’ summer home in Castel Gandolfo, under the direction of the Jesuit priest Alois Gatterer. There, he and his colleagues carefully measured the emission lines of many different pure metals. Gatterer was one of the founders of the journal Spectrochimica Acta, which was actually printed at the Vatican in the years after World War 2 when facilities for producing scientific journals were hard to come by.

My own association with spectra was purely by proximity. When I was a student at the University of Arizona’s Lunar and Planetary Lab back in the 1970s, there was a pipe 130 feet long (40 meters) and 2 feet wide that ran the length of our building, through our student offices, into which various nasty chemicals were introduced which were thought to be possible constituents of planetary atmospheres. A long line of graduate students (many of whom, like Dale Cruikshank and Toby Owen, went on to become leaders in our field of Planetary Sciences) did thesis work by measuring the absorption of different wavelengths of sunlight, bounced back and forth by a series of mirrors at either end of the pipe to create an effective path length of several kilometers. They could then match these absorptions to what they were observing at the telescope, thus identifying many of the important trace gases in Jupiter and other planets.

In a recent e-mail, Dale described to me how that spectra tube was installed and used: “The tube itself was made of stainless steel, but the end cap that had the windows for entry and exit of light was made of very thick (~1.5 in) aluminum… The big tube had mirror mounts and other internal hardware that made it easier to align … We could get up to about 2 km pathlength before serious deterioration of the image, but seeing conditions in these tubes (White cells) always cause problems unless the whole thing is refrigerated.”

(He also told me one story of his adventures with that tube: “The tube was of welded construction, and in order to inspect the interior surfaces of the welds, the builder had made a little cart with wheels such that a person could lie on his back and scoot through the entire length of the tube with a flashlight.  I did that once, just for a joy ride, and it was terrifying – not a trip for the claustrophobic!  For awhile I had occasional nightmares of being mid-way down the tube and hearing the clank of someone bolting on the end cap and starting the vacuum pump…”)

The days of large spectra labs, like the one at the Vatican or the LPL tube (and similar tubes at NASA Ames and elsewhere) are now over, but their work provided the necessary data to make sense of telescope spectra. Today, different kinds of facilities now continuing this kind of support work. For example, one that continues to do invaluable research in my field is the RELAB group at Brown University, where the reflectance spectra of meteorites from the ultraviolet to the infrared are measured. 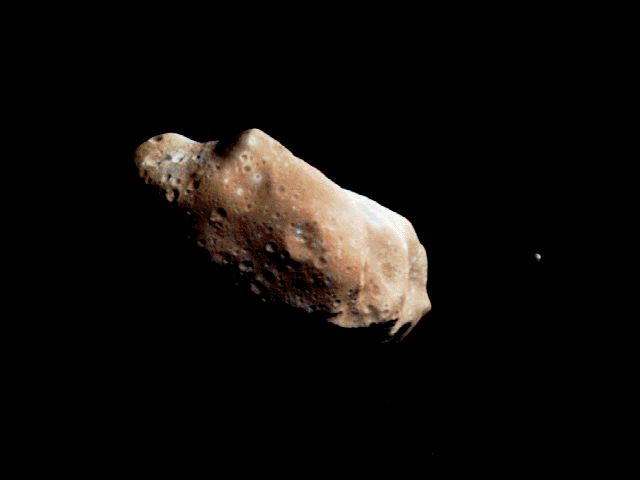 But spectra aren’t the only data measured in a lab that help us understand the things we see in a telescope. The focus of my own lab work was directly tied to a discovery of Galileo – in this cases, not Galileo the astronomer but Galileo the Spacecraft. On its way to Jupiter back in the early 1990s, the Galileo probe passed by asteroid Ida and discovered a small moon orbiting that asteroid. By watching the moon’s orbit, Galileo team members were able to calculate a mass for the asteroid; and its images of Ida gave them a measure of Ida’s volume. Mass divided by volume produced a density, the first reliable density for an asteroid.

Over the next ten years, astronomers like Bill Merline (Southwest Research Institute) and his colleagues were able to use adaptive optics on the Keck and other large telescopes to discover dozens of other asteroids with small moons. Radar images of near-Earth asteroids (especially those measured at the Arecibo telescope) showed that many of them had little moonlets, as well. And further space missions to asteroids, such as NASA’s Shoemaker/NEAR mission and the Japanese Hayutaka mission to asteroid Itokawa, have further filled out our understanding of asteroid densities. To date, about 50 asteroid densities have been measured.

It would appear to be a simple matter to compare these densities against the density of the meteorites thought to come from those asteroids; but, of course, nothing in astronomy is simple. For one thing, even by the time of the Ida encounter in the mid 1990s only a handful of meteorites had actually had their densities measured.

Measuring the volume of an irregularly shaped object like a rock is a problem that Archimedes solved two thousand years ago… you dunk it in water and measure the volume of the water that splashes out. Alternately, you can weigh it in air and then in water, and the difference can tell you the density of the rock compared to the water it displaces. There are two problems with applying this system to meteorites, however.

First of all, the water can contaminate the meteorite. It can rust the iron bits, wash away dissolvable salts, and add trace impurities. The second problem is that every meteorite is riddled with pore spaces, which the water may – or may not – penetrate. Will this method give me the outer “bulk” volume of the whole rock, pores and all? Or just the volume of the rocky bits, the “grain volume”? What you are actually likely to get is some indeterminate volume in between the two.

You need to use a fluid other that water. One that completely penetrates all the pore spaces is Helium gas, though in fact regular air works fine in most cases. A gizmo called a pycnometer measures gas pressures in various chambers, with and without the meteorite, to see how much space the sample takes up. You also need a fluid one that won’t go into any of the pores. For that, we pioneered the use of small glass beads that pour around the meteorite like sugar pouring off a spoon into a cup of cappuccino. (Guess where I got that idea?) And once you have these two different volumes, the difference tells you the volume of the pore spaces: the meteorite’s porosity.

When all this is finally compared to the asteroid densities, a fascinating result comes out. Typical stony asteroids, thought to be made of ordinary chondrite meteorite material, are about 20% to 30% less dense than the meteorites themselves: evidence that they are, at the very least, riddled with cracks and voids. More startling, the dark asteroids are typically only half the density of even the low density carbonaceous chondrite meteorites, indicating that they’re loose piles of dust or rubble.

Understanding the structure of asteroids starts with these density data, but it doesn’t stop there. Measurements made in labs like mine are now providing the data on the magnetic and thermal properties of meteorites. Theorists can use these data to make accurate models for how the asteroids are heated by sunlight (which, over millions of years, can affect the way they orbit and spin) and how they evolve internally when they are subjected to heating from radioactive elements within the asteroidal material, or by electric fields induced by their interaction with the solar wind. This, in turn, tells us what to look for in our telescopes the next time we observe these asteroids. 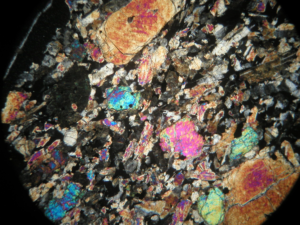 A thin section under crossed polarization of the Martian meteorite Tissant, from the Vatican collection

Finally, a small confession of sorts… the work we do with the meteorites uses pycnometers and beads, magnetic susceptibility coils, and other large devices to poke and prod at the fabric of the meteorites. None of that actually involves microscopes. So why did I mention them at the beginning of this article?

The practical use for the microscopes in my lab is in my curation work: simply inspecting the samples in the collection, especially those that are being borrowed or returned, to keep track of the physical shape that each sample is in. But while curation is not necessarily as exciting as the data collection in the lab, it is work that I particularly enjoy. Indeed, sometimes I use my microscopes on these samples for the same reason I’ll take a small amateur’s telescope outdoors at night: just for the sheer joy of looking at these beautiful little pieces of the universe.