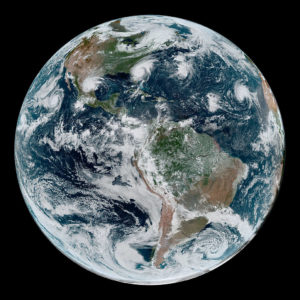 And then I wrote… The year 2009 was the International Year of Astronomy: 400 years since Galileo first gazed at the sky through a telescope, and 40 years since humans first set foot on the Moon. In its honor, the Redemptorist Press invited me to write a series of reflections on issues of religion and science for the Sunday bulletins that are distributed in churches throughout the United Kingdom.

As it happens, the days of the week in 2009 match those of 2020 (after this year’s leap day) and the liturgical calendar also matches; thus, both in 2009 and 2020, the 14th Sunday of Ordinary Time falls on 5 July. Here’s what I wrote for the first reflection:

We all learned in school that the world is round. But, day to day, each of us lives in a much narrower universe. We look to the horizon and see only a flat expanse, a few buildings or trees, with ourselves at the center of it all. There’s the dome of the sky overhead; but we rarely notice it. Instead, the most important locations in our personal universe are where we sleep and eat, where we work, or where we entertain ourselves.

We live our lives without ever knowing that we’re walking on the surface of a sphere… much less, that this globe which seems so big to us is but an insignificant speck orbiting an average star in an average galaxy, one of billions of such stars and billions of such galaxies. And, indeed, you might ask: do we need to know? The writer of the first chapter in Genesis…

…who described the universe as a disk covered by a dome, knew nothing of modern astrophysics. But he knew God well, and he lived a good and holy life. Isn’t that enough for us? 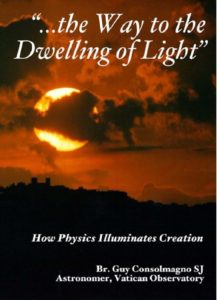 I used that quote from Job as the title of a book on science for the faithful; you can download a copy from our website [click here]

I would argue, it is not. To be self-satisfied with our ignorance is to limit both ourselves and our relationship to God. When Job, in his crisis, complains to God about the injustices he has endured, God responds in a fascinating way. Starting in Chapter 38 of the Book of Job, God asks Job if he knows all the wonders of the universe; wonders that Job had never thought about before. “Do you know the way to the dwelling of light? Do you know the laws of the sky?”

God asks this not to “show off” His greatness, nor even just to put Job’s problems in perspective. Rather, there is implied an invitation: come with Him, to discover the way to the dwelling of light! Join with the morning stars who, we are told, sang in chorus while all the sons of God shouted for joy at the foundation of the Earth!

For those of us who are called to be scientists, the exploration of God’s creation is a response to an invitation to spend time with the Creator. We get to play with Him, so to speak, uncovering the delightful puzzles He sets for us and marveling at the way the laws of the universe fit together with a logic that is both harmonious and elegant. In this way we learn to see a side of God’s personality. But even if we are not professional scientists, we can still be fascinated by the workings of the universe that those professionals can share with us, and in that way take part in the game at least as spectators.

In any event, it is clear that the one attitude we can never take toward science is fear, as if it were a threat to God. Speaking about science, Pope John Paul II put it most bluntly: “Truth cannot contradict truth.” Science does not replace God. Rather, it reveals that God is more amazing than we could ever have realized.

The writer of Genesis insisted that God made everything that could be seen: the flat Earth, the dome above it, even the “waters above and below the dome.” If today we recognize that the universe includes all the stars and galaxies, extending for 13.8 billion light years (and that’s only the part we can see), how much bigger we must recognize God to be!

I was living in Florence when I wrote these pieces… in theory brushing up on my Italian, in practice spending a lot of time getting to know a glorious city.